Learn WATER idioms, SEA and OCEAN idioms in English. In English, there are a number of idioms relating to water, the sea and the ocean. Let’s take a look at the following lesson below.

1. Water under the bridge

Meaning: Something in the past that cannot be undone but is forgive or accepted

E.g. That argument we had is just water under the bridge now—don’t even worry about it.

Meaning: To try very hard to survive financially or handle a lot of work

E.g. We all have to co-operate just to keep our heads above water.

Meaning: In trouble because of something that you have done

E.g. Rick’s temper had landed him in hot water again.

Meaning: To feel uncomfortable because you are in an unfamiliar situation

E.g. When Carla transferred to a new school, she was like a fish out of water because she didn’t know anyone there.

5. As a duck takes to water

E.g. My son is very social, so he took to kindergarten as a duck takes to water.

6. Blood is thicker than water

Meaning: People who are related have stronger obligations to each other than to people outside the family.

E.g. My relatives insist that blood is thicker than water, but I just can’t blindly condone the bizarre things that some of them do.

Meaning: To spend too much money

E.g. For years he was an absolute penny-pincher. Now that he’s got asteady job, he spends money like water.

8. Of the first water

Meaning: Something that is of the first water is of the finest or most exceptional quality (like being compared to a diamond)

E.g. The restaurant is renowned for serving food of the first water.

Meaning: To not be or not appear to be true, verifiable, or able to be supported by facts.

Meaning: To reduce the effectiveness or force of something.

E.g. The new laws watered down the power of the president.

Meaning: Said to someone whose relationship has ended and there are other people in the world to meet and date

E.g. Don’t cry over Pierre – there are plenty more fish in the sea!

Meaning: A very small amount compared to what is needed

E.g. My letter of protest was just a drop in the ocean.

Meaning: If the world is your oyster, you can do what you want or go where you want

E.g. You’re young and healthy and you have no commitments – the world is your oyster. 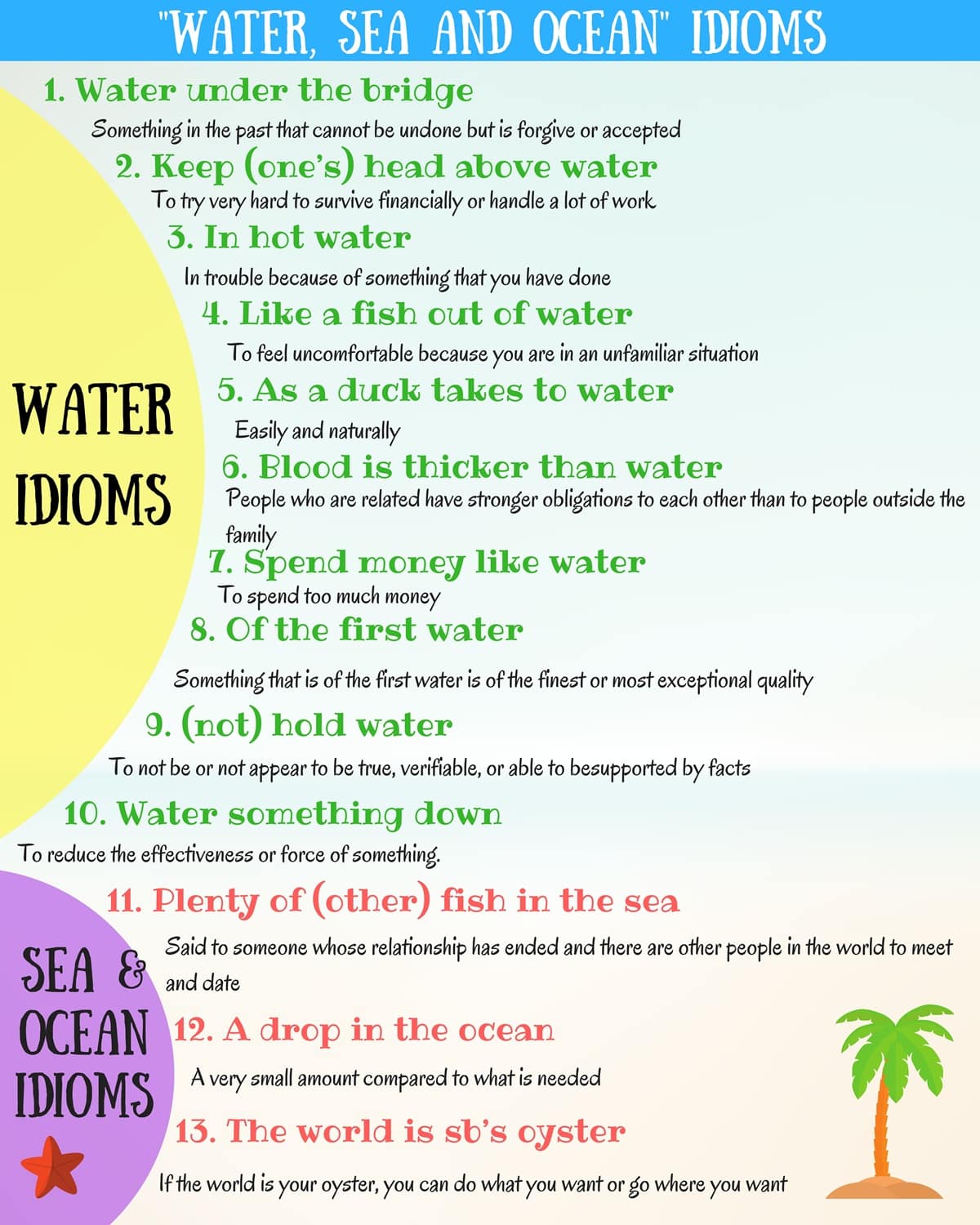 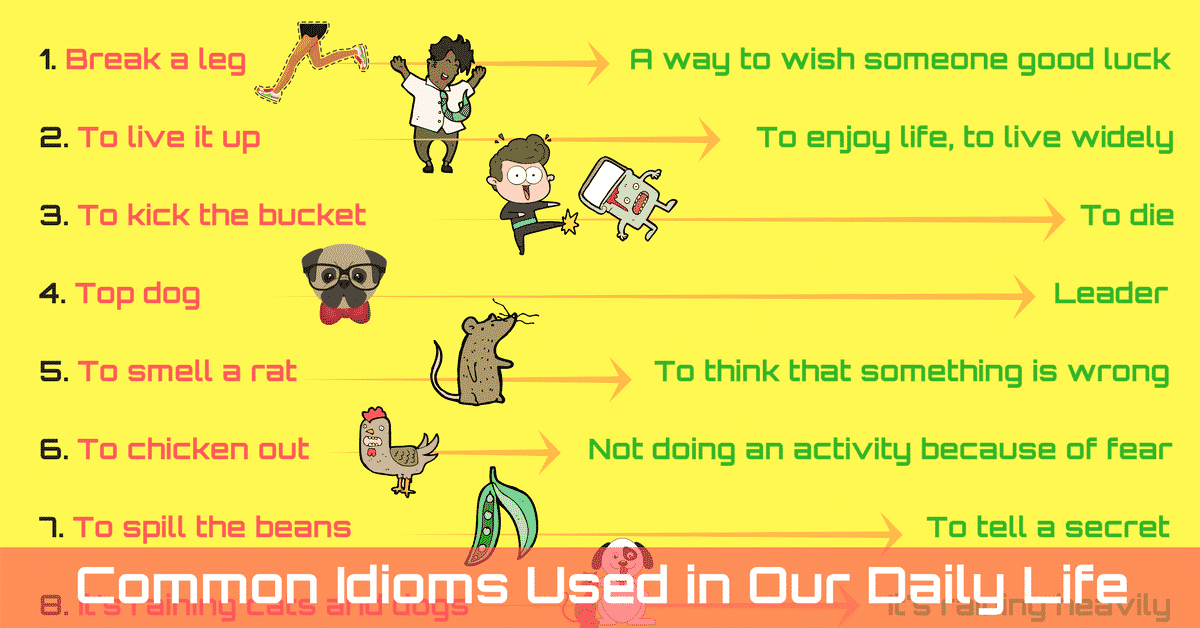 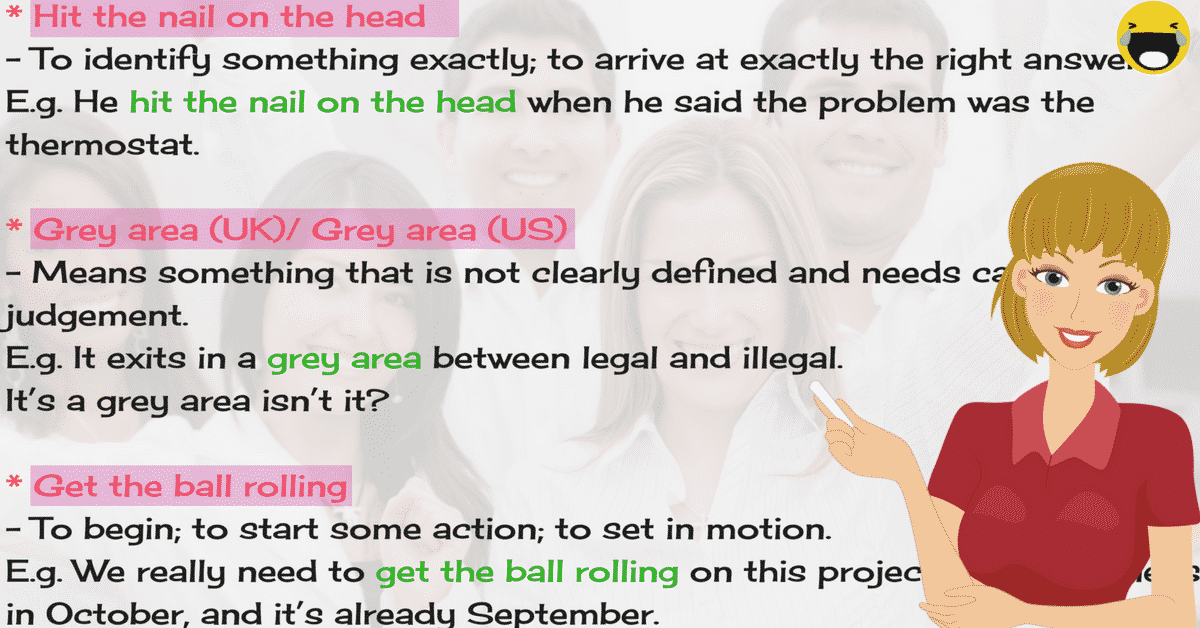 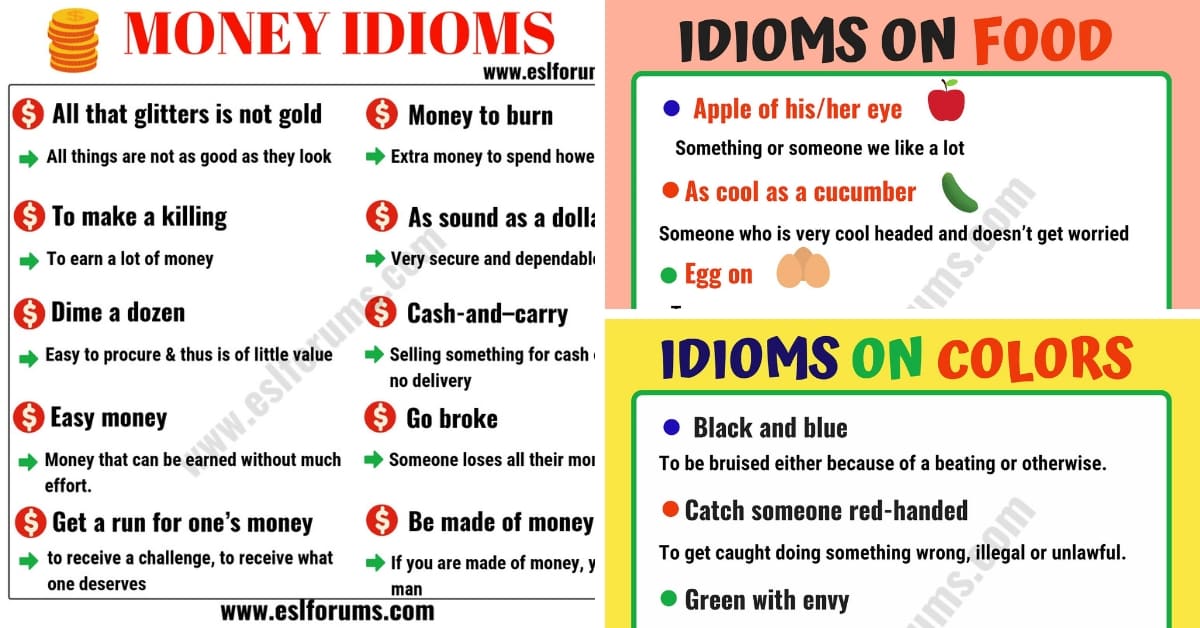 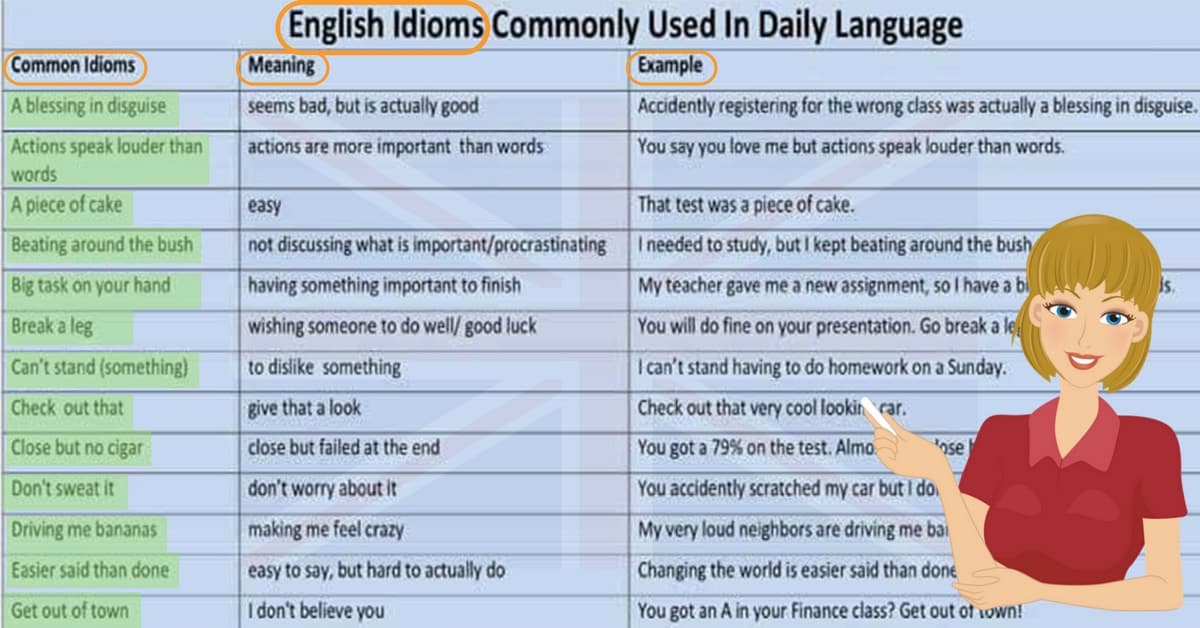 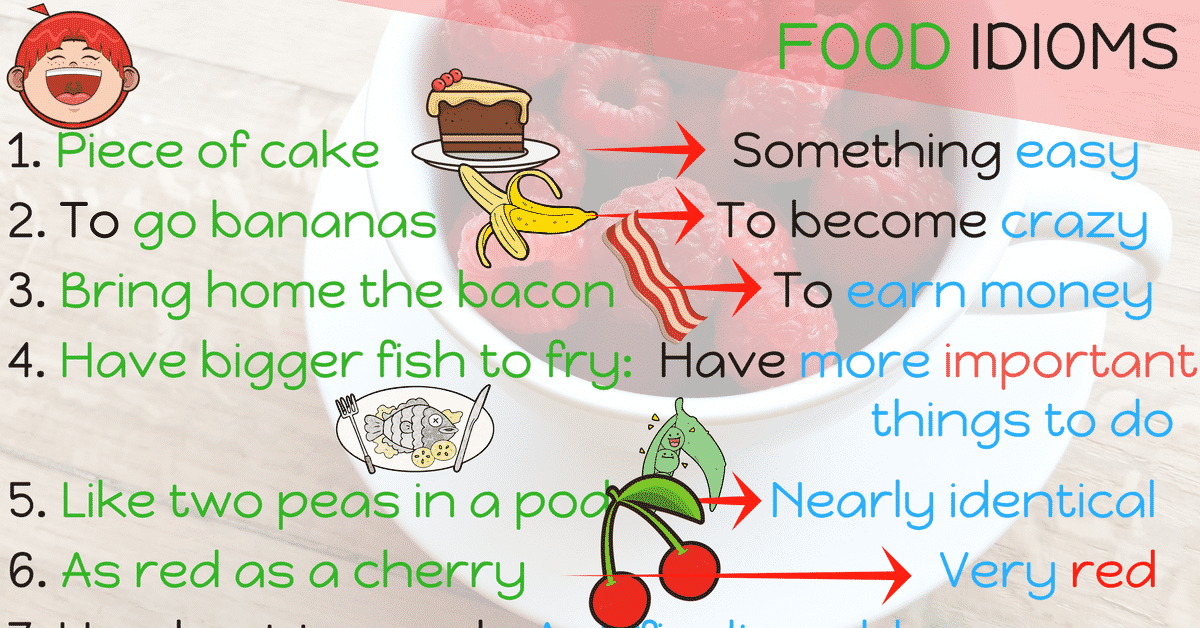 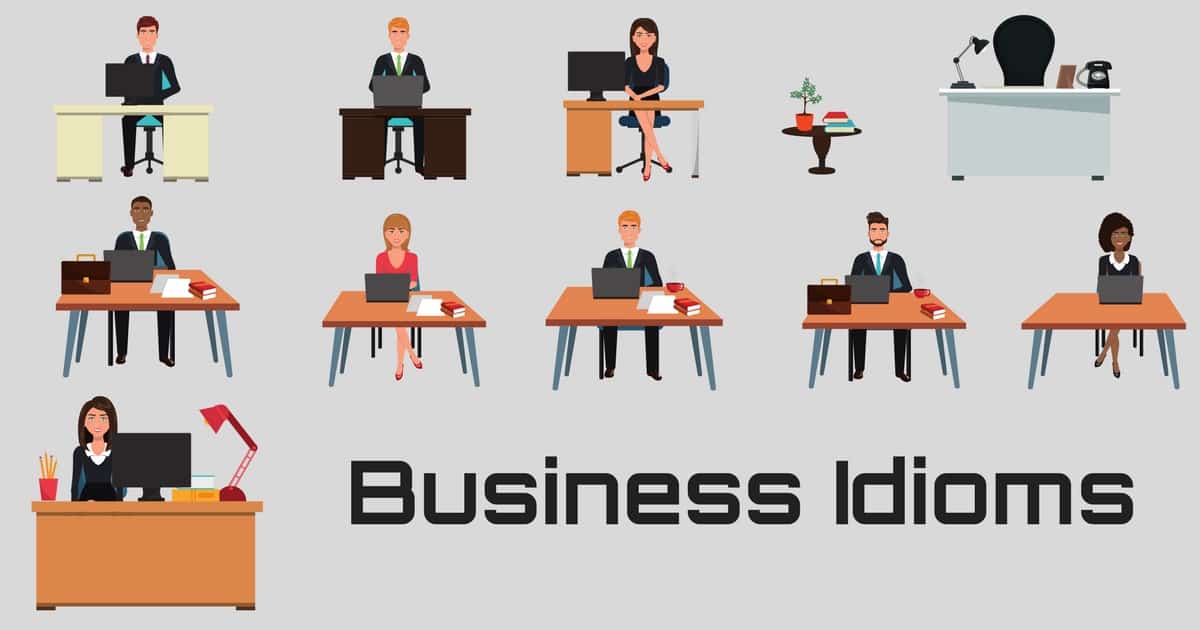