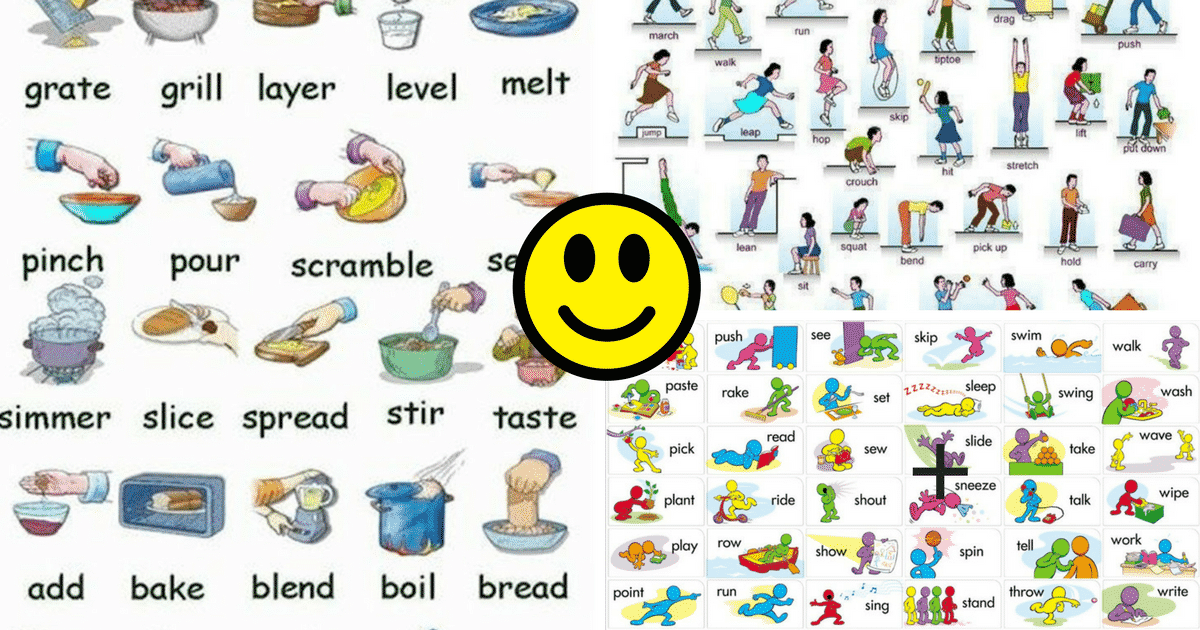 Grate – to cut (food) into very small pieces by rubbing it against a special tool (called a grater).

Grill – to cook (food) on a metal frame over fire.

Level – to make (something) flat or level.

Melt – to change or to cause (something) to change from a solid to a liquid usually because of heat. Like cheese.

Pinch – the amount of something that can be held between your finger and thumb.

Pour – to cause (something) to flow in a steady stream from or into a container or place.

Scramble – to prepare (eggs) by mixing the white and yellow parts together and then stirring the mixture in a hot pan.

Serve – to give food or drink to (someone).

Simmer – to cook (something) so that it is almost boiling for a certain period of time.

Slice – a thin piece of food that is cut from something larger.

Spread – to put a layer of (something) on top of something else.

Stir – to mix (something) by making circular movements in it with a spoon or similar object.

Taste – to sense the flavor of (something that you are eating or drinking).

Add – to put (something) with another thing or group of things.

Bake – to make (food, such as bread and cake) by preparing a dough, batter, etc., and cooking it in an oven using dry heat.

Blend – to mix (things) thoroughly and usually with good results.

Boil – to cook (something) in water that is boiling.

Bread – to cover (food) with bread crumbs before cooking it.

Broil – to cook (food) directly over or under extremely high heat.

Chop – to cut (something) into pieces by hitting it with the sharp edge of an ax, knife, etc.

Cut – to use a sharp tool (such as a knife) to open or divide (something, such as paper or wood).

Dip – to put (something) into a liquid and pull it out again quickly. 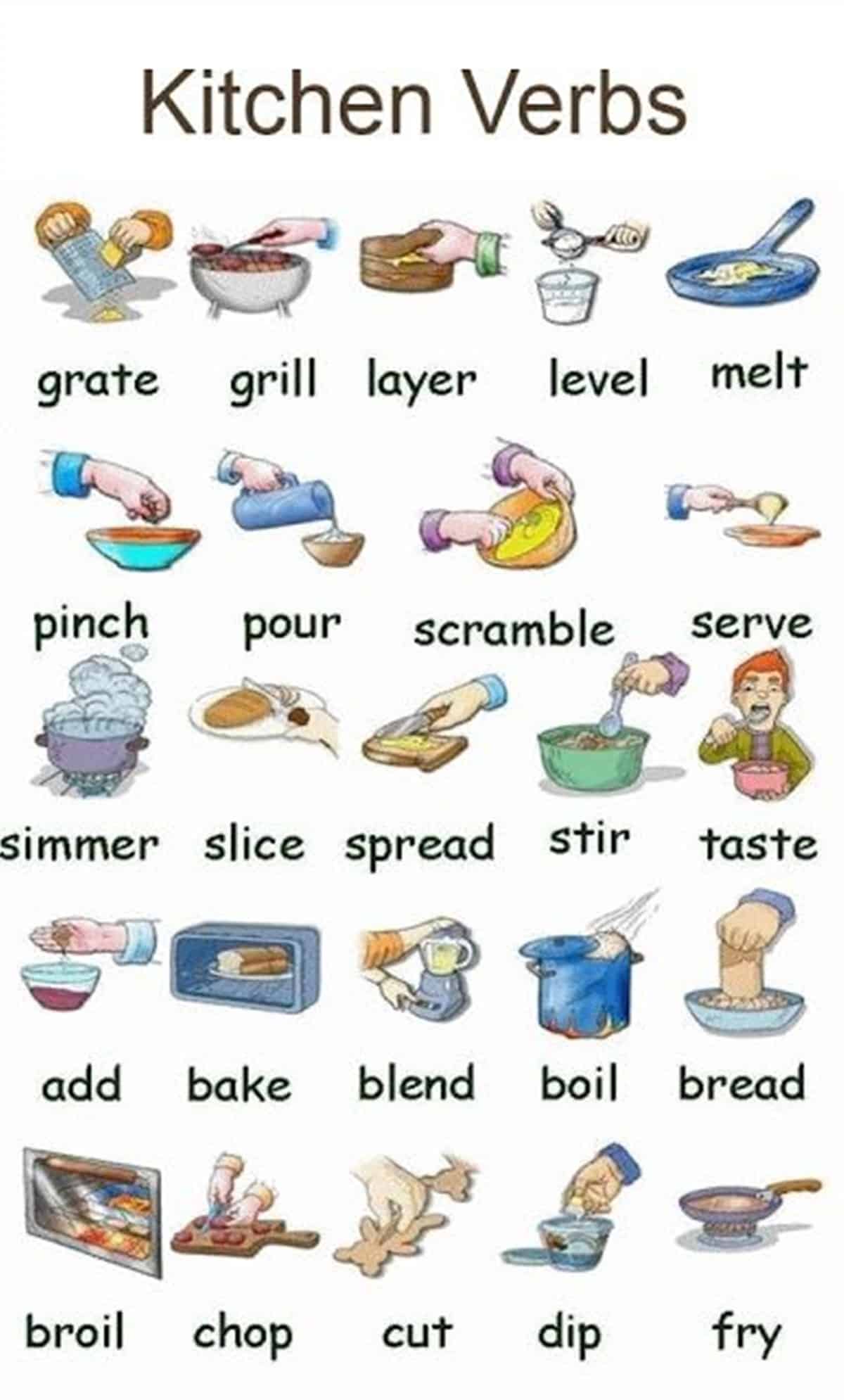 Tap – move your feet to the beat of music

Kick – use your feet to make something move

Limp – walk with difficulty because your leg or foot is injured

Paddle – walk in the sea with bare feet (but still wearing trousers, etc)

Pat – touch someone or something lightly with your open hand

Slap – use your open hand to hit someone or something

Punch – use your closed hand (fist) to hit someone or something

Rip – tear something using both hands

Scratch – use your nails on something

Grab – take something quickly with your hand 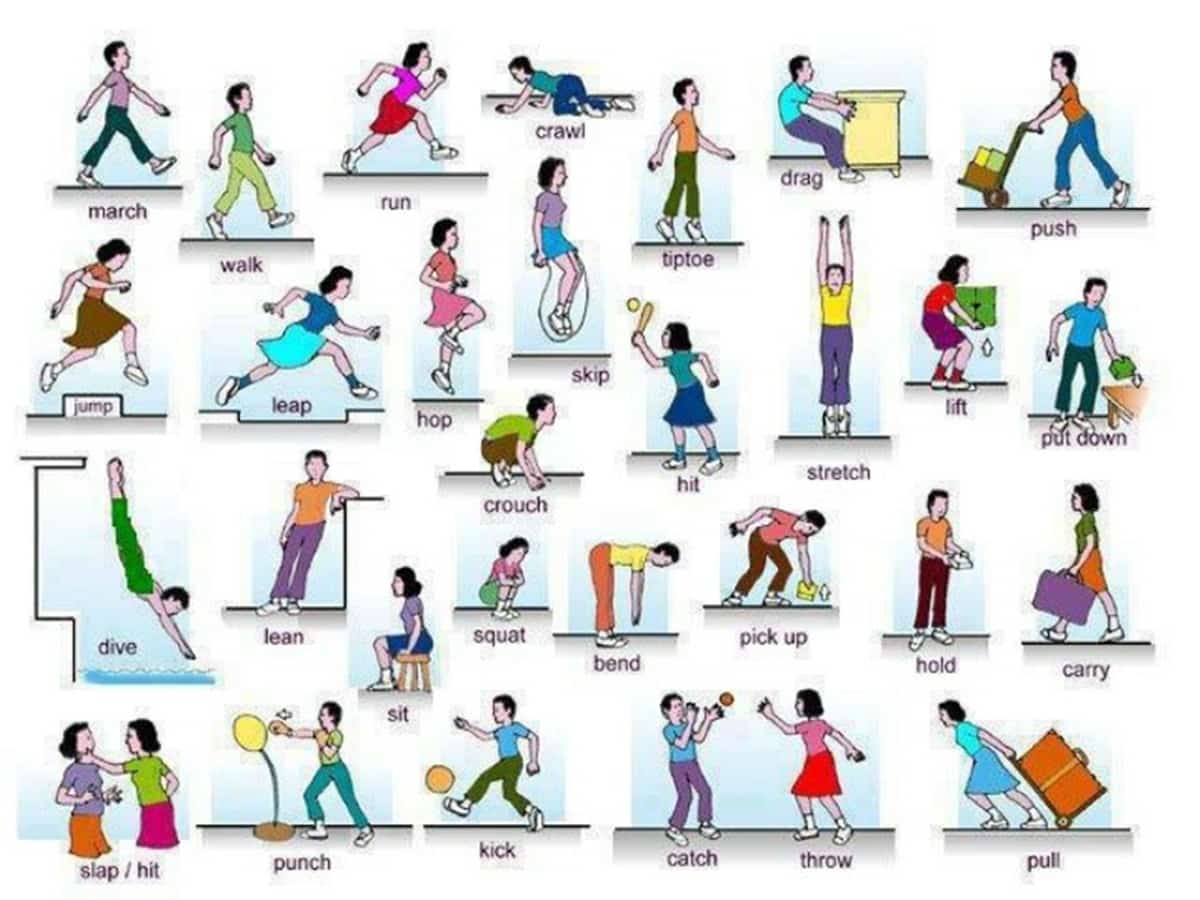 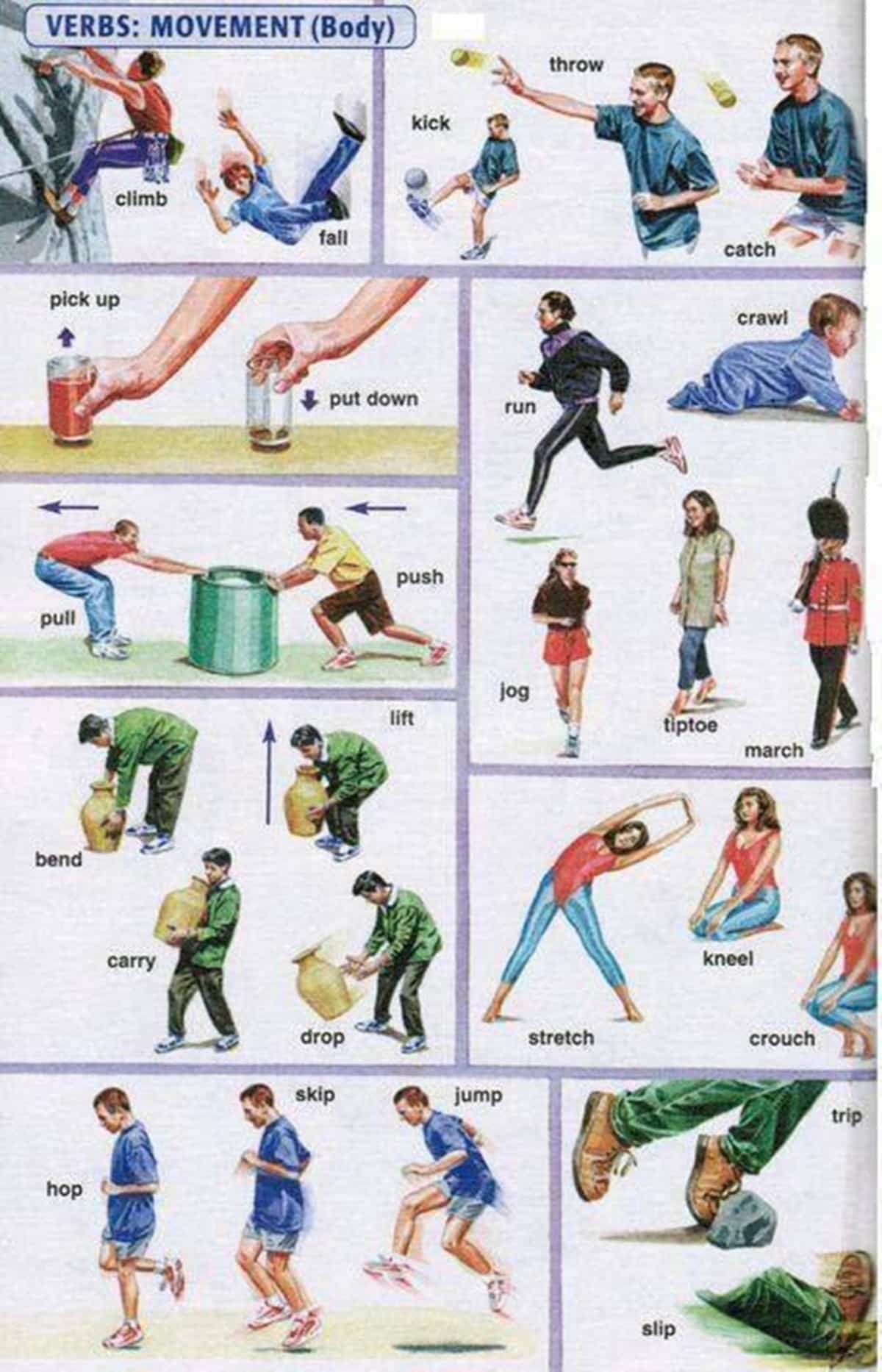 Action verbs, also called dynamic verbs, express an action whether it be physical or mental 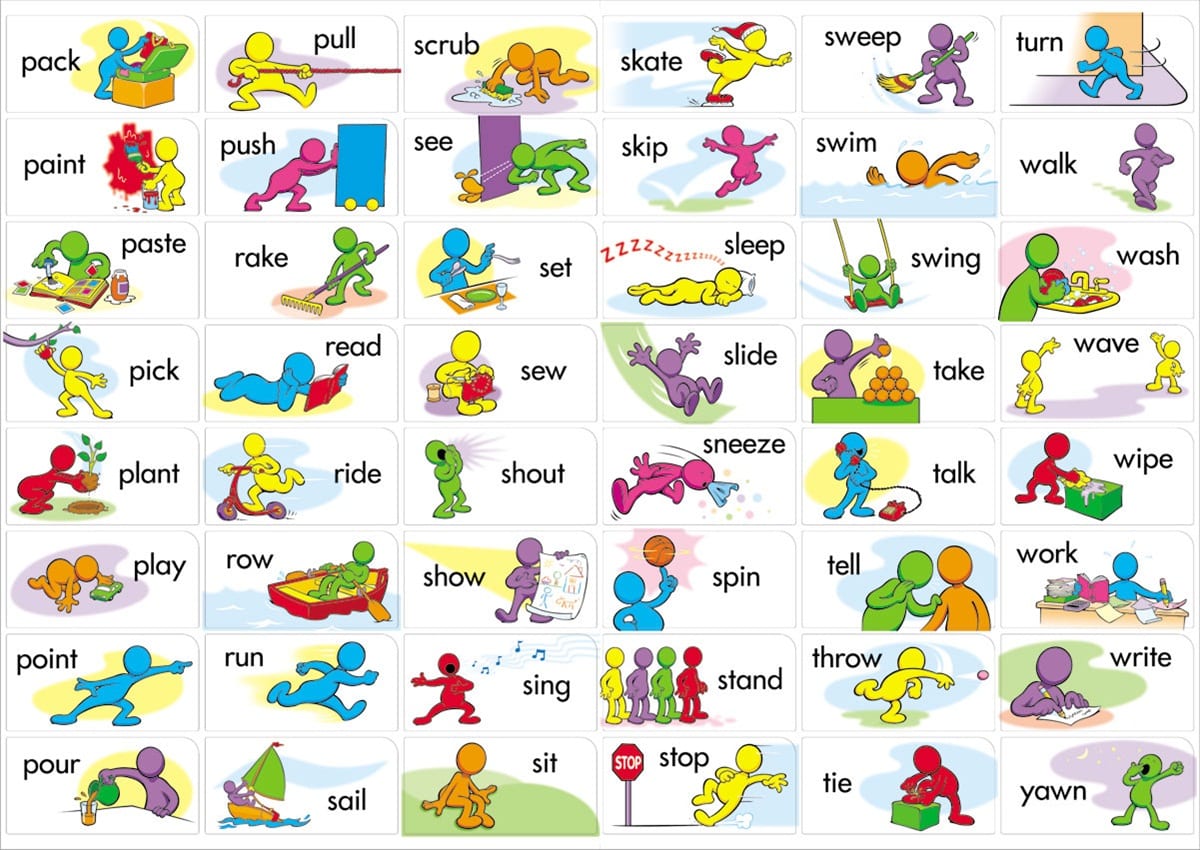 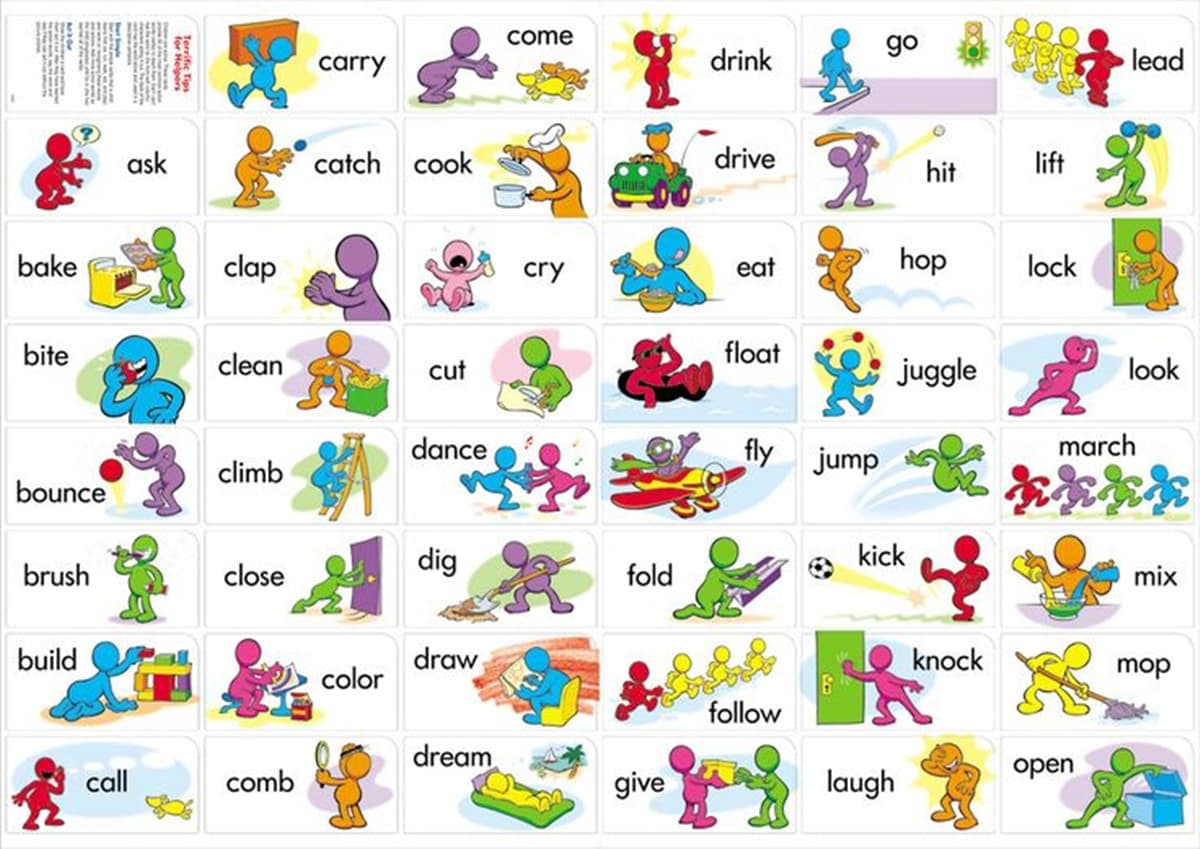 Great website! i can`t believe i just discovered it