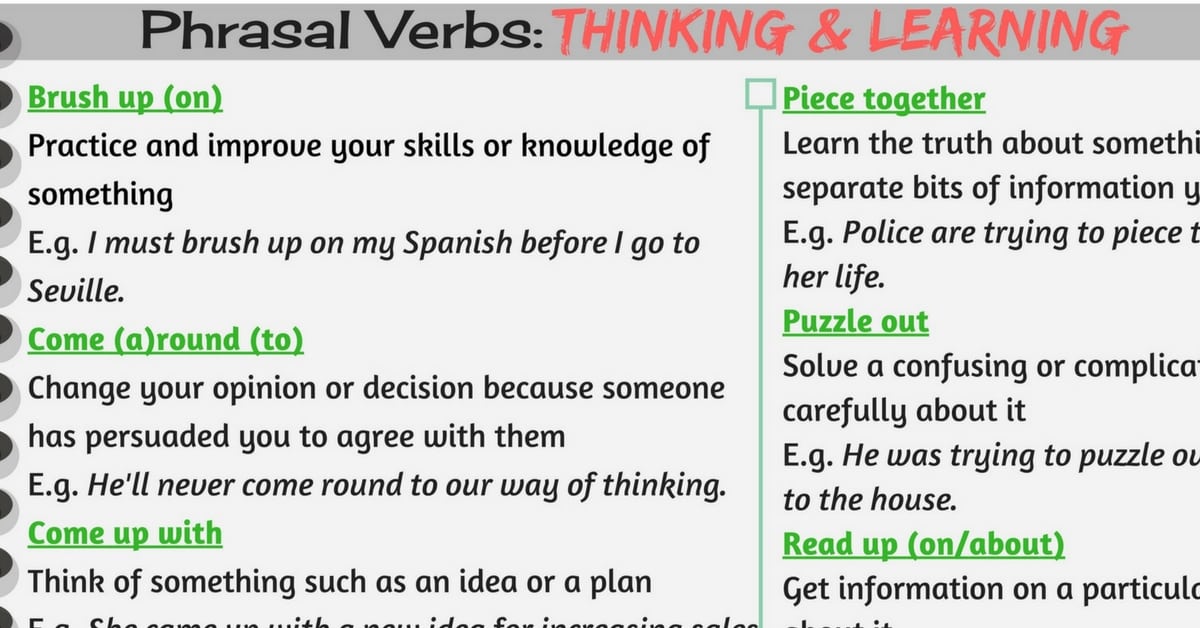 Phrasal verbs and idioms about Thinking and Learning in English.

Meaning: Practice and improve your skills or knowledge of something

E.g. I must brush up on my Spanish before I go to Seville.

Meaning: Change your opinion or decision because someone has persuaded you to agree with them

E.g. He’ll never come round to our way of thinking.

Meaning: Think of something such as an idea or a plan

E.g. She came up with a new idea for increasing sales.

Meaning: Accept something and try to deal with it

E.g. She had to face up to the fact that she would never walk again.

Meaning: Be able to understand something or solve a problem; understand what someone is like and why they behave in the way they do

E.g. We couldn’t figure her out.

Meaning: Suddenly have an idea; discover something by chance

E.g. She hit on the perfect title for her new novel.

Meaning: See, hear or understand someone or something with difficulty; suggest, imply

E.g. I could hear voices but I couldn’t make out what they were saying.

Meaning: Think carefully about something over a period of time

E.g. I need some time to mull it over before making a decision.

Meaning: Learn the truth about something by considering all the separate bits of information you have

E.g. Police are trying to piece together the last hours of her life.

Meaning: Solve a confusing or complicated problem by thinking carefully about it

E.g. He was trying to puzzle out why he had been brought to the house.

Meaning: Get information on a particular subject by reading a lot about it

E.g. I’ll need to read up on the case before the meeting.

Meaning: Study something very hard, especially for an examination

E.g. Make sure you swot up on the company before the interview.

Meaning: Understand and remember something that you hear or read

E.g. Halfway through the chapter I realized I hadn’t taken anything in.

E.g. He’d like more time to think things over.

Meaning: Consider the facts about something in an organized and thorough way

E.g. They had failed to think the policy through.

Meaning: Invent or imagine something, especially an excuse

E.g. Can’t you think up a better excuse than that?

Meaning: If success goes to your head, it makes you think that you are better or more important than you really are

E.g. Fame and fortune had gone to his head.

Meaning: Be able to think quickly and make sensible decisions

E.g. She managed to keep her wits about her and escaped unharmed.

Meaning: Not knowing very much about something, because other people are keeping it secret from you

E.g. We are still very much in the dark about how the money was lost.

Meaning: Know the important facts about a situation

E.g. You have to know whats what and when to draw the line.

Meaning: Not have any way of proving that you are right about something

E.g. If you have no witnesses, you don’t have a leg to stand on.

Meaning: Used for saying that someone cannot understand what is important in a situation because they are thinking too much about small details

E.g. He can’t see the wood for the trees.

Meaning: Guess what is happening or what something means based on what you have seen or heard

E.g. “How did you know they were having an affair?” “I’d seen them out together a couple of times, so I just put two and two together.”

Meaning: Taking a very short/long time to understand or realize something

E.g. He’s a little slow on the uptake, so you may have to repeat the instructions a few times.

Meaning: Something that rings a bell sounds familiar to you, although you cannot remember the exact details

E.g. The name rings a bell but I can’t think where I’ve heard it.

E.g. I’d tell you if you were going around the bend.

Meaning: Argue or worry about very small details or differences that are not important

E.g. More than half the cases they complained about were not, in fact, on Garzon’s list, but let’s not split hairs.

Meaning: Spend some time thinking about the situation you are in before you decide what to do next

E.g. After two years spent teaching overseas, she returned home for a month to take stock of her life.