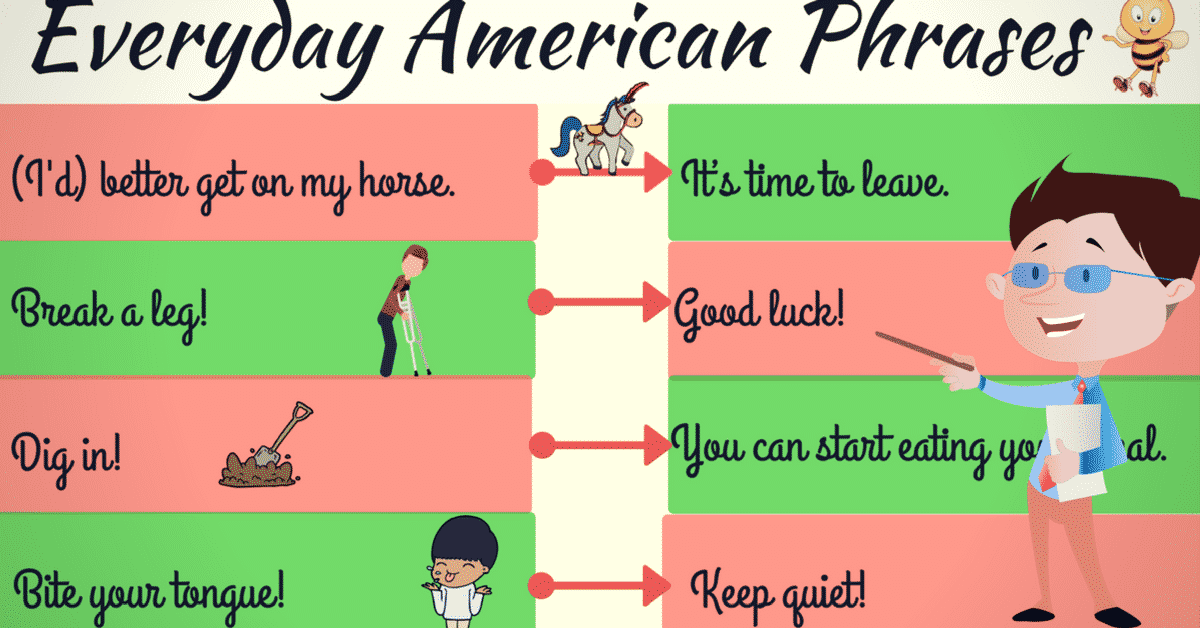 Phrases & slang & idiomatic expressions are an important part of any language and can add color and personality to your speech and writing. They can also be a source of confusion for non-native speakers or those unfamiliar with the cultural context. Below is a list of phrases and exclamations, many of which are particularly common in American English.

These expressions are mainly used in spoken English, however, so you should avoid using them in your written English!

Good luck! (Usually said to someone who is going to appear in front of an audience.)

You can start eating your meal.

Go away and mind your own business!

Write me (a letter).

Go away and stop bothering me!

Said when you lose the chance to do or have something e.g. Bang goes my pay rise!

Even though that may be true.

Used sarcastically when someone expects praise but you don’t think they deserve it.

There’s no way to beat the bureaucracy.

Do not even appear to be doing something!

Don’t you dare bring up that subject.

I know that very well!

Please be at ease and make yourself at home.

Do you understand what I’m saying?

An expression inviting someone to go out of doors to settle an argument by fighting.

A response to an inquiry about the state of one’s health.

You can figure out the rest.

I understand what you said / what you want.

Be patient, things will work out.

Have a nice day.

Please be kind and compassionate.

That’s something I can get used to.

I agree with what you said.

Everything is fine, and there is nothing else that I could want.

I didn’t hear what you said, so would you please repeat it.

I’m surprised to hear that!

I’m very serious about what I said!

An apology by someone who must leave a social event soon after eating.

I know exactly what you mean!

Okay, I’ll answer your question / I’ll listen to your joke.

An expression used to turn down an informal invitation.

You have my attention.

I understand what you’re saying.

Now./ In these modern times.

An expression to signal that the hearer understands.

I said the wrong thing.

I will pay this bill.

An announcement of one’s desire or need to leave.

If that’s what you want to do, you will have to endure the consequences.

I’ve experienced the same thing and I know what you’re talking about.

I will not endure any more of something.

I will not tell anyone.

There is no way that I would know the answer to that question.

A phrase introducing something that is meant to be a secret.

Be patient! Just wait a minute!

Be quiet! Stop that noise!

Something you say when it’s raining heavily, or you’ve just come in out of the rain.

I cannot do it.

Not as far as I’m concerned.

Not according to my views.

Now you’re doing what you should be doing!

That’s fine with me.

…or similar words meaning about the same thing.

A defiant phrase indicating the strength of one’s opposition to something.

A very indignant response to a criticism or rebuke.

Do you want me to answer your question without having time to give it some thought?

Believe me! Trust me, I am telling you the truth.

I know what I’m talking about.

That’s going too far! Something will have to be done.

That is what is required!

A phrase encouraging someone to continue the good work.

Used when you want to emphasize that something is very good e.g. That’s what I call a holiday!

A pledge not to reveal a secret or to tell something or someone.

Whatever pleases or excites you is okay.

What are the negative factors?

What are the charges? How much is the bill?

A phrase expressing consent or agreement.

96. Yesterday wouldn’t be too soon.

An answer to the question “When do you want this?”

The best, most exciting, or cleverest part is yet to come.

98.You could have knocked me over with a feather.

I was extremely surprised.

You are absolutely right!

You are in a position to tell me what to do.

Quite useful! I highly appreciate all your team(ESLBuzz tutors)’ work – linguistic, cultural, humane! Thank you very much!

Why did you repeat this?

Quite useful! I highly appreciate all your team{ESLBuzz tutors)’ work – a task – linguistic, cultural, humane! Thank you very much!

Quite useful! I highly appreciate all your team(ESLBuzz tutors)’ work – a task linguistic, cultural, humane! Thank you very much!

good , useful and thank you.

do it
Reply to  Debra Kirkpatrick

good , useful and thank you.

I love this! It helped me find “all” the phrases I needed for my homework assignment! This is the Best!!!

Phrase meaning of ‘her eyes are half out’

Not entirely accurate, with misleading definitions and antiquated phrases.