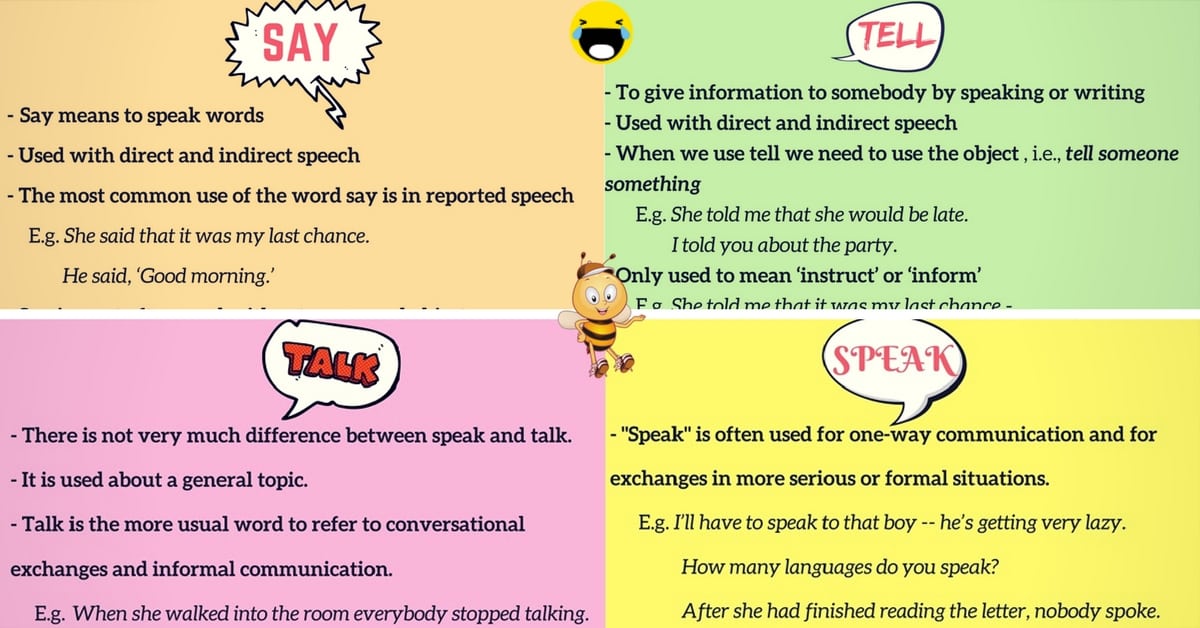 What’s the Difference between Say, Talk, Tell and Speak in English?

How to Use SAY

– “Say” use with direct and indirect speech

E.g. She said that it was my last chance.

– “Say ” is most often used without a personal object

– If we want to put a personal object after say, we use “to”

E.g. And I say to all the people of this great country…

To/ That – If we are going to use an object, we always use the preposition “to”.

E.g. “He said to Steve that that he was going to be late.

We use “to” to show who we are directing our words at and “that” to say the information.

How to Use TELL

– To give information to somebody by speaking or writing

– Used with direct and indirect speech

– When we use tell we need to use the object , i.e., tell someone something

“I told you about the party.”

“Have you told him the news?”

“She always tells me that.”

– Only used to mean ‘instruct’ or ‘inform’

E.g. She told me that it was my last chance.

– Tell  is used to tell someone to do something

E.g. Tom’s mother told him to clean his room.

– Tell is not used before objects like a word, a name, a sentence, a phrase.

– We do not usually use It after tell to refer to a fact.

E.g. ‘I don’t want to tell you again to get your homework done.’

To – When we use to with tell we are giving someone an order or making a strong request.

“Didn’t I tell you to mind your own business?”

About – To tell someone about something is used to pass information about an event or a series of events which happened to a person.

E.g. “Let me tell you about a girl I know, she had a drink about an hour ago,”

“Did I tell you about my party?”

That –  When we use that we are expressing an action or a more permanent situation. To compare examples, we can’t say, “,” we would have to say, “Did I tell you about her pregnancy.”

E.g. “Did she tell you that she was pregnant?”

“Did I tell you I changed cell number?”

How to Use TALK

– “Talk” is used about a general topic.

– Talk is the more usual word to refer to conversational exchanges and informal communication.

E.g. When she walked into the room everybody stopped talking.

– In spoken English, we commonly use the word talk in the continuous form

E.g. “The movie was really good but people kept talking during the best parts.”

To/ About– We use “to” to show who we are directing our words at and “about” to give the information.

“Did he talk to you about his trip?”

How to Use SPEAK

– “Speak” is often used for one-way communication and for exchanges in more serious or formal situations.

E.g. I’ll have to speak to that boy — he’s getting very lazy.

How many languages do you speak?”

After she had finished reading the letter, nobody spoke.

– Speak is the usual word to refer to knowledge and use of languages.

To… about…– Just like tell, we use “to” and “about” to direct our words and give information.

E.g. “Did you speak to him about our new project?”

With – We use “with” to say who we are speaking to or how that person speaks, usually in reference to their accent.

E.g. “Have you ever spoken English with an Australian?”

“They speak with a really strange accent.” 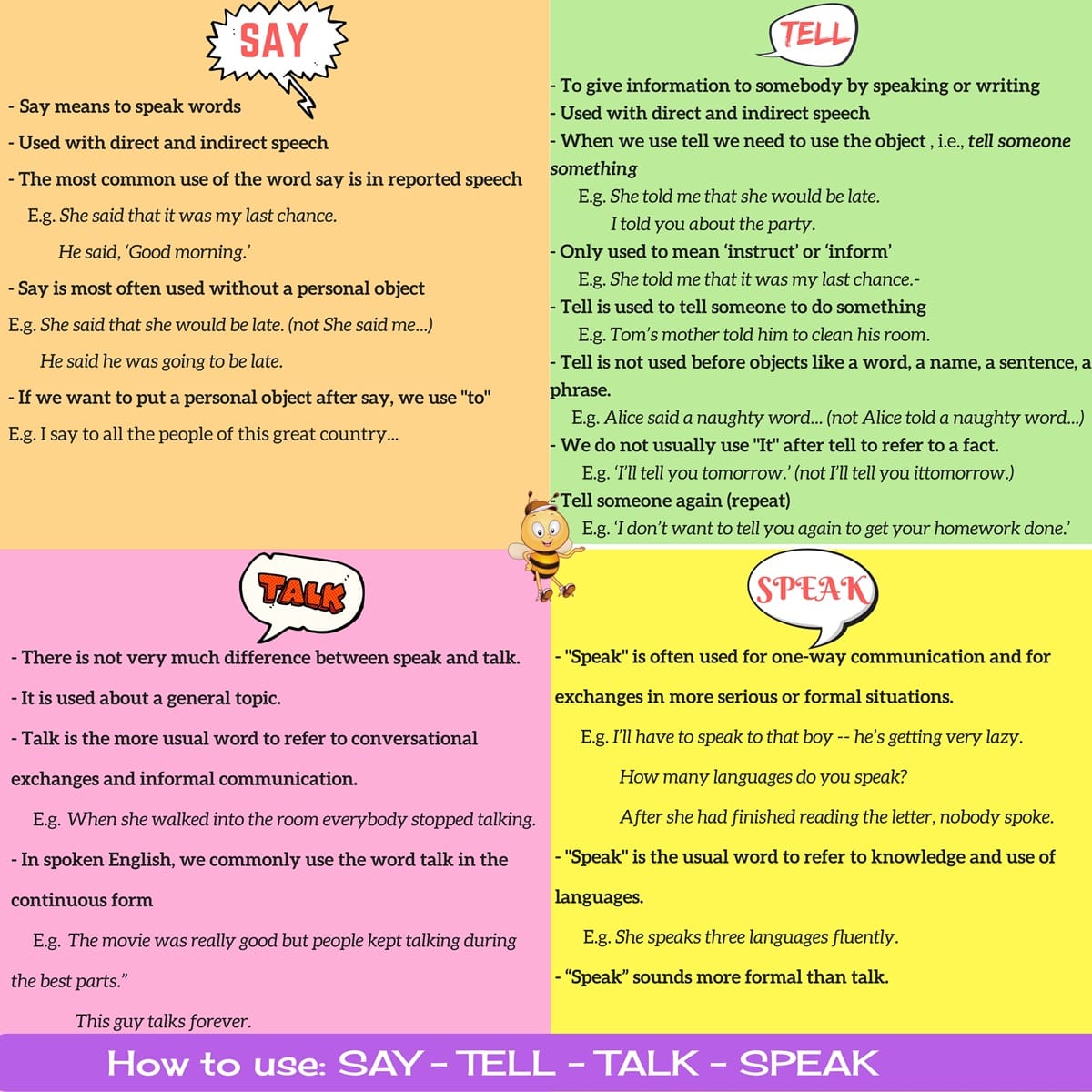 It’s an excellent way of teaching skills.keep it up

I wuold like to learn your english, thank you to all lesson

Very useful for the eng.learners.send more

There’s mistake in your example. Rectify. She said that it was her last chance. The word my is changed to her in “indirect speech”.

Communication is always two-way, even if the other person doesn’t say anything. Not saying is still communication.

I’m very glad to be with you and progressing.Thank you for your hared work.