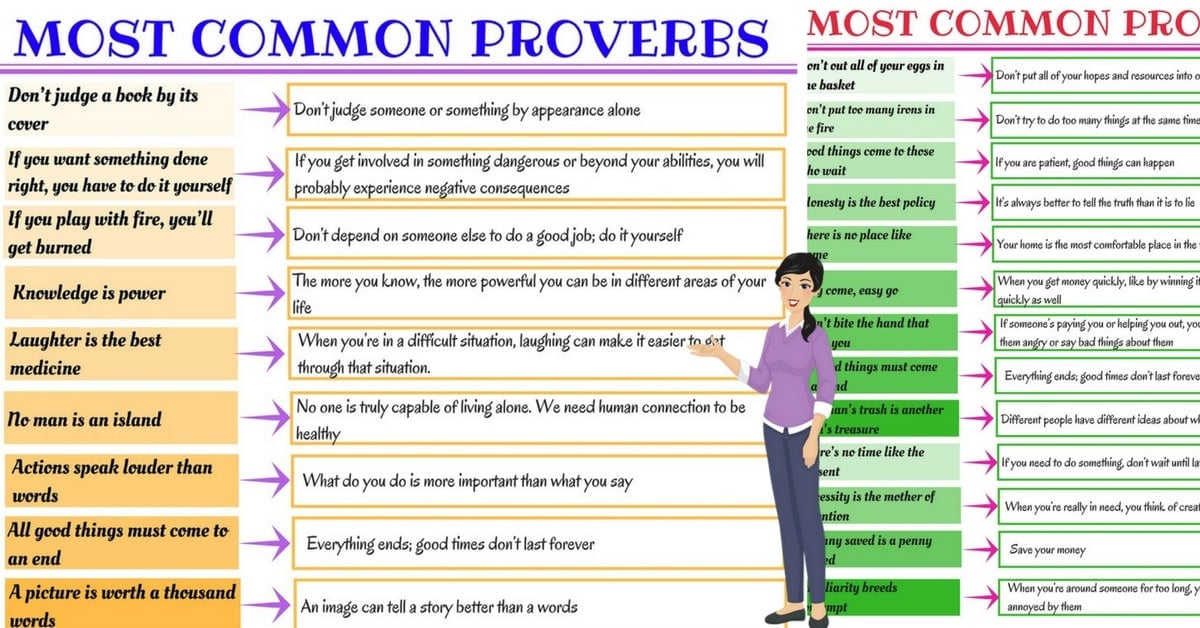 An English proverb is a simple and concrete saying, popularly known and repeated, that expresses a truth based on common sense or experience.

It’s good to know the really common English proverbs because you hear them come up in conversation all the time. Sometimes people say the entire proverb to give advice to a friend.

Learning proverbs can also help you to understand the way that people in English-speaking cultures think about the world.

In the list below, we are going to explore 33 common sayings with their meaning.

1. If you play with fire, you’ll get burned

Meaning: If you get involved in something dangerous or beyond your abilities, you will probably experience negative consequences.

2. If you want something done right, you have to do it yourself

Meaning: Don’t depend on someone else to do a good job; do it yourself.

Meaning: The more you know, the more powerful you can be in different areas of your life.

4. Laughter is the best medicine

Meaning: When you’re in a difficult situation, laughing can make it easier to get through that situation.

Meaning: No one is truly capable of living alone. We need human connection to be healthy.

Meaning: What do you do is more important than what you say.

7. All good things must come to an end

8. A picture is worth a thousand words

Meaning: An image can tell a story better than a words.

9. Beauty is in the eye of the beholder

Meaning: What is “beautiful” is different for each other.

Meaning: It’s better to finish something late than to never do it at all.

11. Birds of a feather flock together

Meaning: People who are similar spend time together.

Meaning: Don’t judge someone or something by appearance alone.

13. Don’t count your chickens before they hatch

Meaning: Don’t expect a positive result before you actually see it.

14. Don’t out all of your eggs in one basket

Meaning: Don’t put all of your hopes and resources into one goal or dream.

15. Don’t put too many irons in the fire

Meaning: Don’t try to do too many things at the same time; focus on one thing at a time.

16. Good things come to those who wait

Meaning: If you are patient, good things can happen.

Meaning: It’s always better to tell the truth than it is to lie.

Meaning: Your home is the most comfortable place in the world.

Meaning: When you get money quickly, like by winning it, it’s easy to spend it or lose it quickly as well.

20. Don’t bite the hand that feeds you

Meaning: If someone’s paying you or helping you out, you have to be careful not to make them angry or say bad things about them.

Meaning: When you try to change someone’s behavior or it doesn’t work, you might have to change instead.

22. One man’s trash is another man’s treasure

Meaning: If you need to do something, don’t wait until later. Do it now.

24. Necessity is the mother of invention

Meaning: When you’re really in need, you think of creative solutions to your problems.

25. A penny saved is a penny earned

Meaning: Save your money.

Meaning: When you’re around someone for too long, you get tired of them and annoyed by them.

Meaning: Things sometimes look different than they really are. A restaurant that looks old and small might have amazing food.

28. Good things come to those who wait

Meaning: The delayed occurrence or achievement of something that one desires is better than it not happening at all.

30. Birds of a feather flock together

Meaning: People like to spend time with others who are similar to them.

31. Keep your friends close and your enemies closer

Meaning: If you have an enemy, pretend to be friends with them instead of openly fighting with them. That way you can watch them carefully and figure out what they’re planning.

32. A picture is worth a thousand words

33. There’s no such thing as a free lunch

Meaning: Things that are offered for free always have a hidden cost.