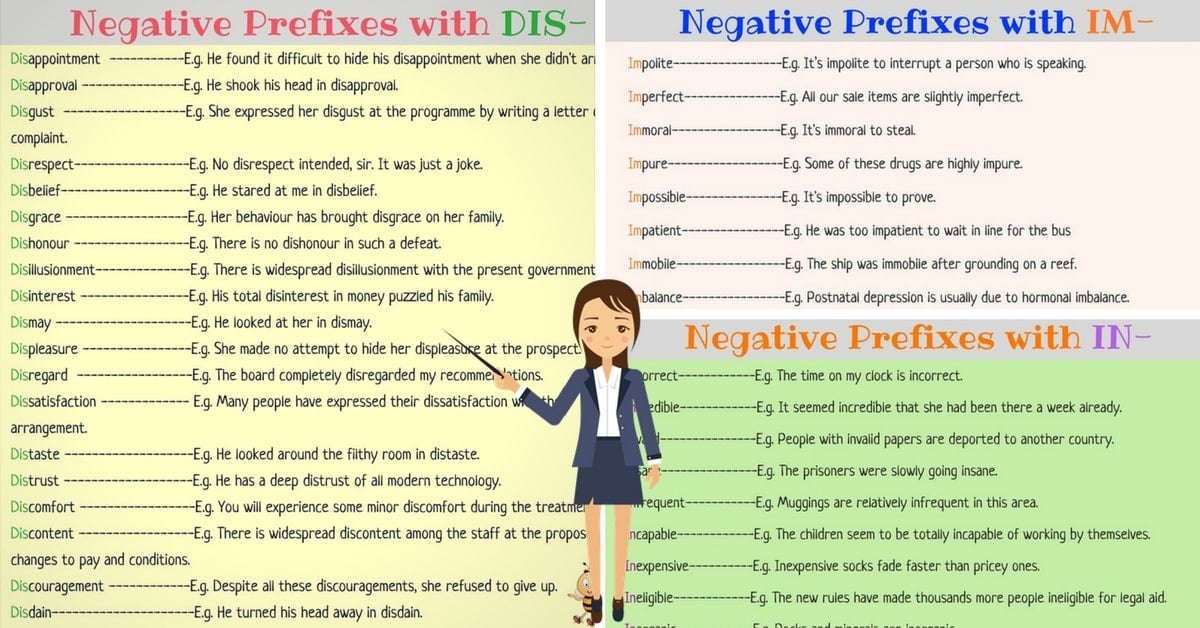 E.g.  He found it difficult to hide his disappointment when she didn’t arrive.

E.g. He shook his head in disapproval.

E.g. She expressed her disgust at the programme by writing a letter of complaint.

E.g. No disrespect intended, sir. It was just a joke.

E.g. He stared at me in disbelief.

E.g. Her behaviour has brought disgrace on her family.

E.g. There is no dishonour in such a defeat.

E.g. There is widespread disillusionment with the present government.

E.g. His total disinterest in money puzzled his family.

E.g. He looked at her in dismay.

E.g. She made no attempt to hide her displeasure at the prospect.

E.g. The board completely disregarded my recommendations.

E.g. Many people have expressed their dissatisfaction with the arrangement.

E.g. He looked around the filthy room in distaste.

E.g. He has a deep distrust of all modern technology.

E.g. You will experience some minor discomfort during the treatment.

E.g. There is widespread discontent among the staff at the proposed changes to pay and conditions.

E.g. Despite all these discouragements, she refused to give up.

E.g. He turned his head away in disdain 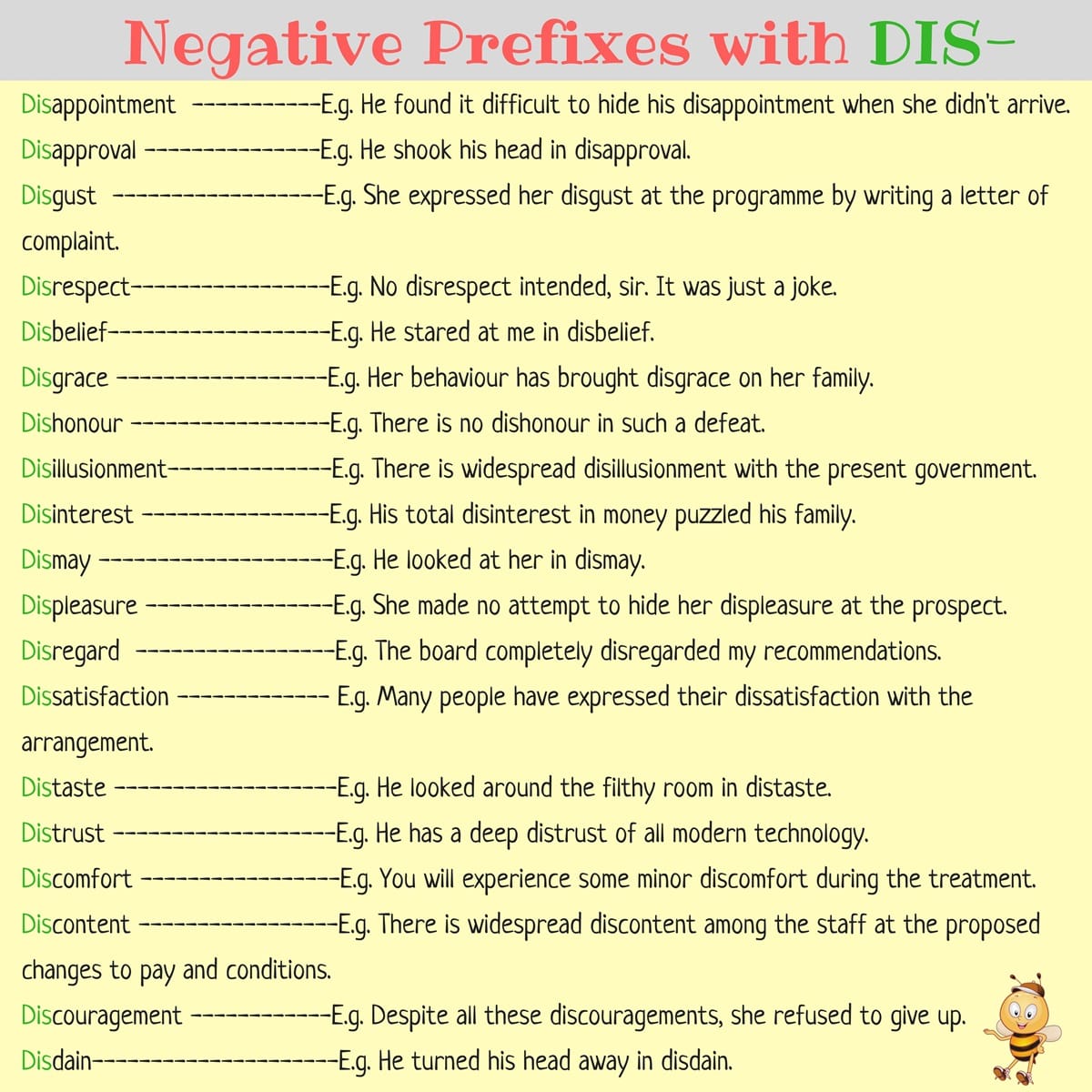 E.g. The party began to take on an unreal, almost nightmarish quality.

E.g. I tried to contact him but was unable to.

E.g. It’s unusual for the trees to flower so early.

E.g. I didn’t realize but he was deeply unhappy at that time.

E.g. She remained loyal to her unfaithful husband.

E.g. It would be unfair not to let you have a choice.

E.g. She was totally unprepared for his response.

E.g. The taxi driver was being very unhelpful.

E.g. He looked pale and unshaven.

E.g. The time on my clock is incorrect.

E.g. It seemed incredible that she had been there a week already.

E.g. People with invalid papers are deported to another country.

E.g. Muggings are relatively infrequent in this area.

E.g. The children seem to be totally incapable of working by themselves.

E.g. The new rules have made thousands more people ineligible for legal aid.

E.g. Rocks and minerals are inorganic.

E.g. He made an indecent suggestion to my wife

E.g. The gas in a balloon is invisible

E.g. We can wear jeans to an informal party

E.g. She is proud to be independent in her job.

E.g. It’s hard to exercise after being inactive for a week.

E.g. Casual clothes are inappropriate at a wedding.

E.g. Rain delayed the game for an indefinite period.

E.g. It is indisputable that Austin is the capital of Texas. 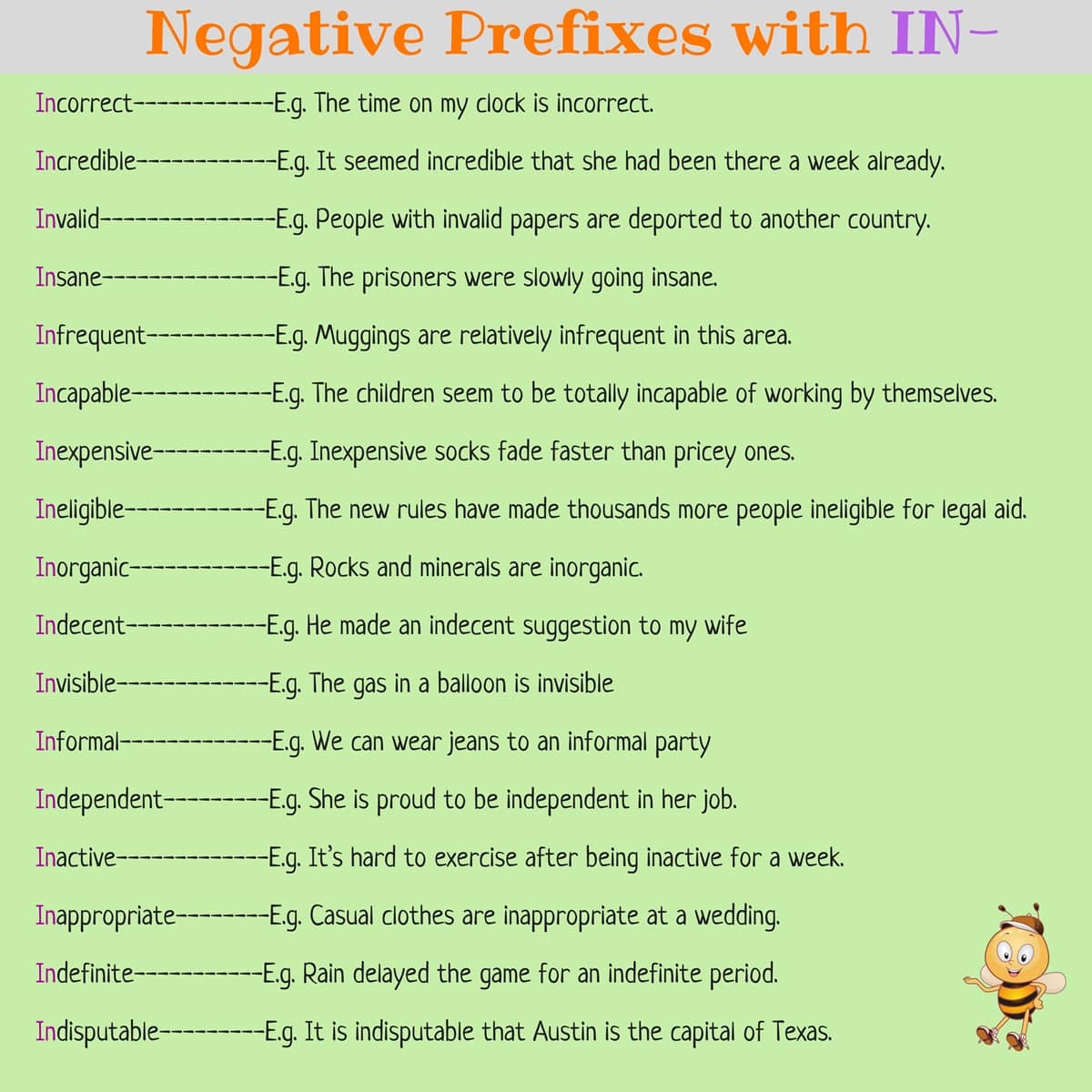 E.g. It’s illegal to drive through a red light.

E.g. His signature is totally illegible.

E.g. His answer is illogical; it makes no sense.

E.g. It’s impolite to interrupt a person who is speaking.

E.g. All our sale items are slightly imperfect.

E.g. Some of these drugs are highly impure.

E.g. He was too impatient to wait in line for the bus

E.g. The ship was immobile after grounding on a reef.

E.g. Postnatal depression is usually due to hormonal imbalance.

E.g. He was dressed in a suit and an impeccable white shirt.

E.g. She is too immature to take a babysitting job.

E.g. A robot is an impersonal teacher. 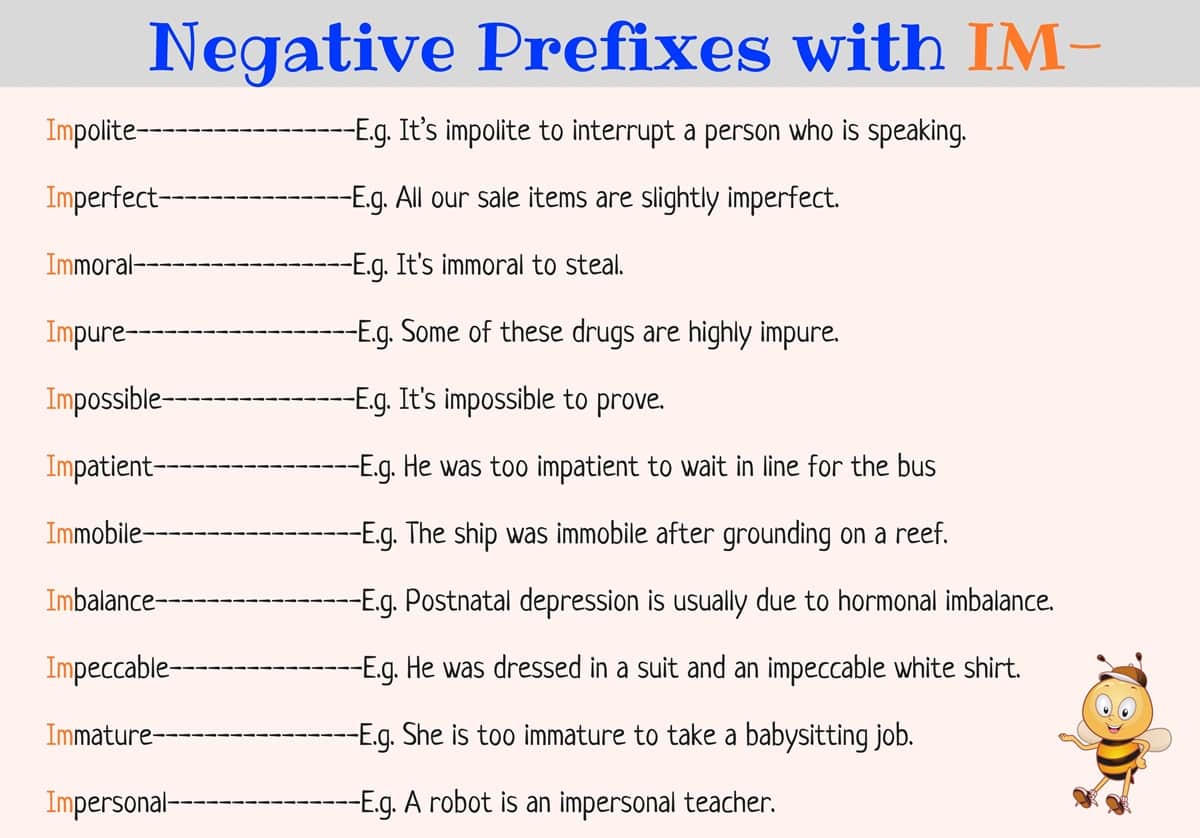 E.g. There was nothing inherently irrational in such a decision.

E.g. The shirt was on sale because of irregular stitches

E.g. It is irresponsible to run into traffic.

E.g. My report is irreparable after my dog chewed it.

E.g. I have no money for non-essentials.

That was a good site Yes
Reply to  Bryan