Music is an important part of culture and traditions, and there are many English idioms related to music (musical instruments, types of music, or musical performance)

Meaning: Buying or selling something at a very cheap price.

E.g. Wow, I can’t believe they let so many things at their yard sale go for a song.

2. Set something to music

Meaning: To write a piece of music to accompany a set of words

E.g. The musician set my lyrics to music.

Meaning: To hear exactly what you want to hear.

E.g. When Michelle heard that her son and daughter-in-law were going to have a baby, it was music to her ears.

Meaning: Pleasant but boring recorded music that is played in public places.

E.g. This elevator music is putting me to sleep, so let’s go walk around the mall again.

E.g. Can you guys please be quiet? Your chin music is distracting me from my work.

E.g. I told you not to try to sneak in, and now that you’ve been caught, you’re just going to have to face the music.

Meaning: When someone changes their opinion or their idea of something particular

E.g.  The mention of a hefty tip really changed the host’s tune, so I think he’ll be able to find us a table after all.

Meaning: To play a piece of music without referencingsheet music or a recording

Meaning: When something seems familiar

E.g. Your description rings a bell, but I don’t think I’ve ever been there myself.

E.g. Andy and Nick had a jam session last night and kept all the neighbors awake.

11. Blow your own trumpet

Meaning: Proudly boasting about your own talents and successes

E.g. I don’t mean to blow my own trumpet, but this pasta sauce I made is quite delicious!

E.g. My staff has to do what I say because I’m the boss, and I call the tune here!

Meaning: Reporting an illegal or unacceptable activity to the authorities

E.g. If you keep coming in late, I’m going to have to blow the whistle and report you to the department head.

Meaning: This means that everything related to or similar is included.

E.g. If we’re going to paint this weekend, we need rollers, drop cloths, and all that jazz.

15. March to the beat of your own drum

Meaning: When someone does things the way they want to, without taking anybody else or anything else into consideration.

E.g. My brother’s eschewed the idea of a full-time career and has had every odd ball job you could think of, but then he’s always been happy marching to the beat of his own drum.

Meaning: This expression is used to describe a final act before dying or ending something.

E.g. We didn’t know that her performance last night was the singer’s swan song.

Meaning: Used to describe something that is familiar to you, reminds you of something or is connected to you somehow.

E.g. The woman in the portrait struck a chord with me, and I realized that it was my grandmother. 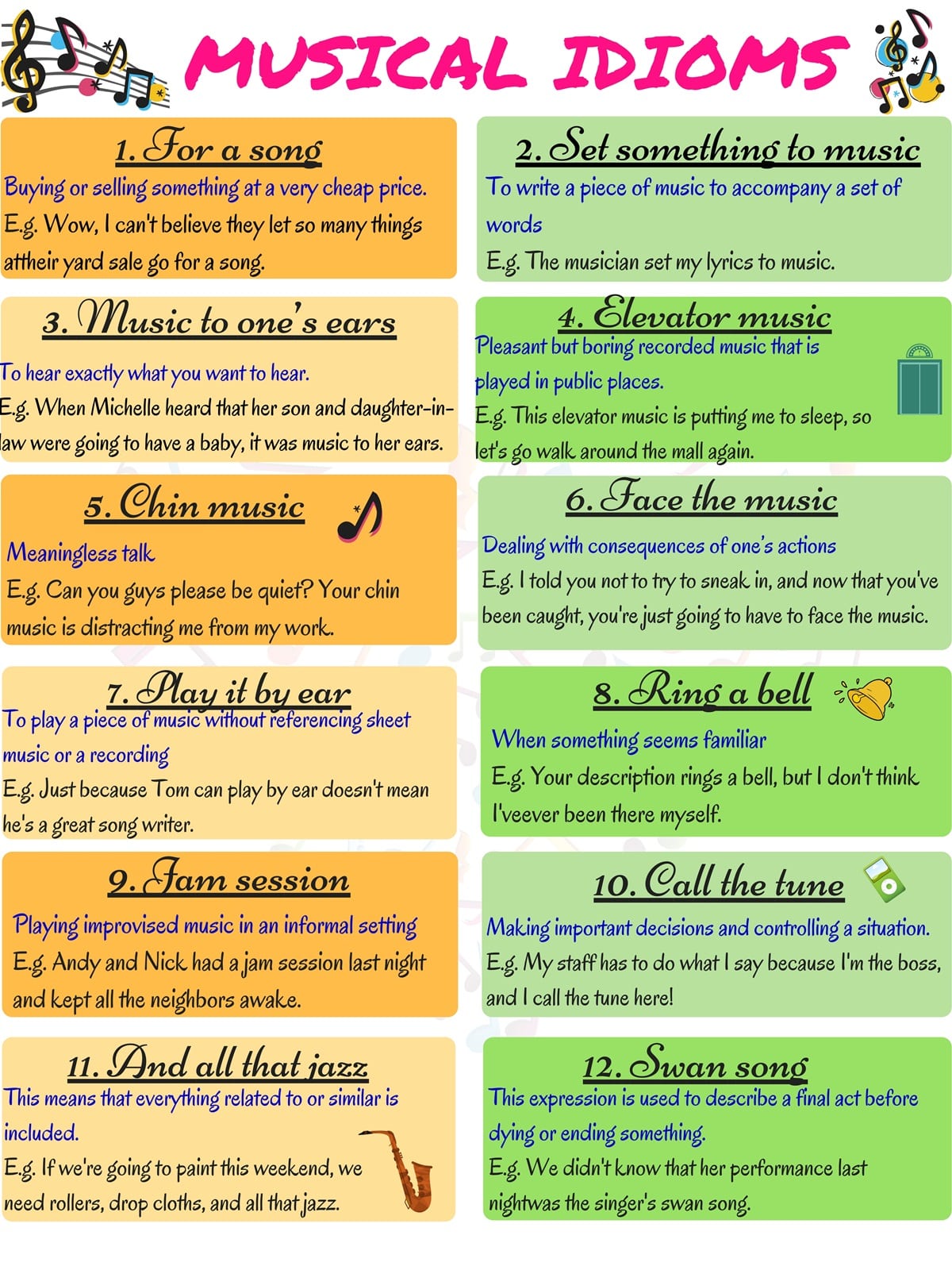