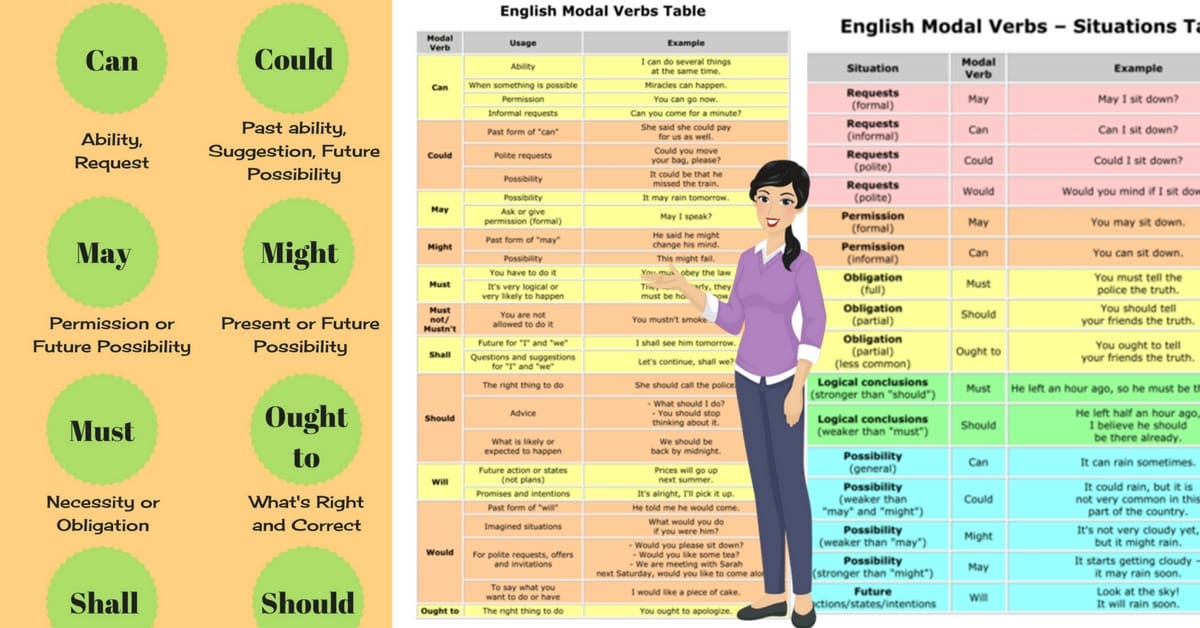 The modals of English are a small class of auxiliary verbs used mostly to express modality (properties such as possibility, obligation, …).

The principal English modals are can, could, may, might, must,  shall,  should, will and would. Certain other verbs are sometimes, but not always, classed as modals; these include ought, had  better, and (in certain uses) dare and need. Verbs which share some but not all of the characteristics of the principal modals are sometimes called “semimodals”.

The modal verb “can” expresses possibility in either a dynamic, deontic or epistemic sense, that is, in terms of innate ability, permissibility, or possible circumstance. For example:

The negation of can is the single word cannot, only occasionally written separately as can not.

Though cannot is preferred (as can not  is potentially ambiguous), its irregularity (all other uncontracted verbal negations use at least two words) sometimes causes those unfamiliar with the nuances of English spelling to use the separated form. Its contracted form is can’t  (pronounced /kɑːnt/ in RP and some other dialects). The negation of could  is the regular could not, contracted to couldn’t.

The negative forms reverse the meaning of the modal (to express inability, impermissibility or impossibliity). This differs from the case with may or might used to express possibility:  it can’t be true has a different meaning than  it may not be true. Thus can’t  (or cannot) is often used to express disbelief in the possibility of something, as must expresses belief in the certainty of something. When the circumstance in question refers to the past, the form with the perfect infinitive is used:

Occasionally  not  is applied to the infinitive rather than to the modal (stress would then be applied to make the meaning clear):

The verb may expresses possibility in either an epistemic or deontic sense, that is, in terms of possible circumstance or permissibility. For example:

The preterite form might is used as a synonym for may when expressing possible circumstance. It is sometimes said that might and could express a greater degree of doubt than may.

May can indicate presently given permission for present or future actions: You may go now.

Might used in this way is milder: You might go now if you feel like it. Similarly May I use your phone? is a request for permission (might would be more hesitant or polite).

A less common use of may is to express wishes, as in May you live long and happy.
When used with the perfect infinitive, may have indicates uncertainty about a past circumstance, whereas might have can have that meaning, but it can also refer to possibilities that did not occur but could have in other circumstances.

Note that the above perfect forms refer to possibility, not permission (although the second sense of might have might sometimes imply permission).

The negated form of may is may not; this does not have a common contraction (mayn’t is obsolete). The negation of might is might not; this is sometimes contracted to mightn’t, mostly in tag questions and in other questions expressing doubt (Mightn’t I come in if I took my boots off?).

For example: “That may fail to be true“. But when permission is being expressed, the negation applies to the modal or entire verb phrase: You may not go now means “You are not permitted to go now” (except in rare cases where not and the main verb are both stressed to indicate that they go together: You may go or not go, whichever you wish).

The verb shall is used in some (particularly formal) varieties of English in place of will, indicating futurity, when the subject is first person (I shall, we shall).

With second- and third-person subjects, shall indicates an order, command or prophecy: Cinderella, you shall go to the ball! It is often used in writing laws and specifications: Those convicted of violating this law shall be imprisoned for a term of not less than three years;  The electronics assembly shall be able to operate within a normal temperature range.

Shall is sometimes used in questions (in the first, or possibly third, person) to ask for advice or confirmation of a suggestion: Shall I read now?; What shall we wear?

Should is sometimes used as a first-person equivalent for would (in its conditional and “future-in-the-past” uses), in the same way that shall can replace will. Should  is also used to form a replacement for the present subjunctive in some varieties of English, and also in some conditional sentences with hypothetical future reference.

Should is often used to describe an expected or recommended behavior or circumstance. It can be used to give advice or to describe normative behavior, though without such strong obligatory force as must or have to. Thus You should never lie describes a social or ethical norm. It can also express what will happen according to theory or expectations:

This should work. In these uses it is equivalent to ought to.

Both shall and should can be used with the perfect infinitive (shall/should have (done)) in their role as first-person equivalents of will  and would  (thus to form future perfect or conditional perfect structures). Also  shallhave may express an order with perfect aspect (You shall have finished your duties by nine o’clock). When shouldis used in this way it usually expresses something which would have been expected, or normatively required, at some time in the
past, but which did not in fact happen (or is not known to have happened):  I should have done that yesterday (“it would have been expedient, or expected of me, to do that yesterday”).

The negative forms are shall not and should not, contracted to shan’t and shouldn’t. The negation effectively applies to the main verb rather than the auxiliary: You should not do this implies not merely that there is no need to do it, but that there is a need not to do it.

The modal will is often used to express futurity (The next meeting will be held on Thursday). Since this is an expression of time rather than modality, constructions with will (or sometimes shall) are often referred to as the future tense of English, and forms like will do, will be doing, will have done and will have been doing are often called the simple future, future progressive  (or future continuous), future perfect, and  future perfect progressive (continuous). With first-person subjects (I, we), in varieties where  shall  is used for simple expression of futurity, the use of will indicates particular willingness or determination.

Future events are also sometimes referred to using the present tense, or using the going to construction.

Will as a modal also has a number of different uses:

Other uses of would include:

Both will and would can be used with the perfect infinitive (will have, would have), either to form the future perfect and conditional perfect forms already referred to, or to express perfect aspect in their other meanings (e.g. There will have been an arrest order, expressing strong probability).

The negated forms are will not (contracted to won’t) and would not (contracted to wouldn’t). In the modal meanings of will the negation is effectively applied to the main verb phrase and not to the modality (e.g. when expressing an order,  you will not do it  expresses an order not to do it, rather than just the absence of an order to do it). 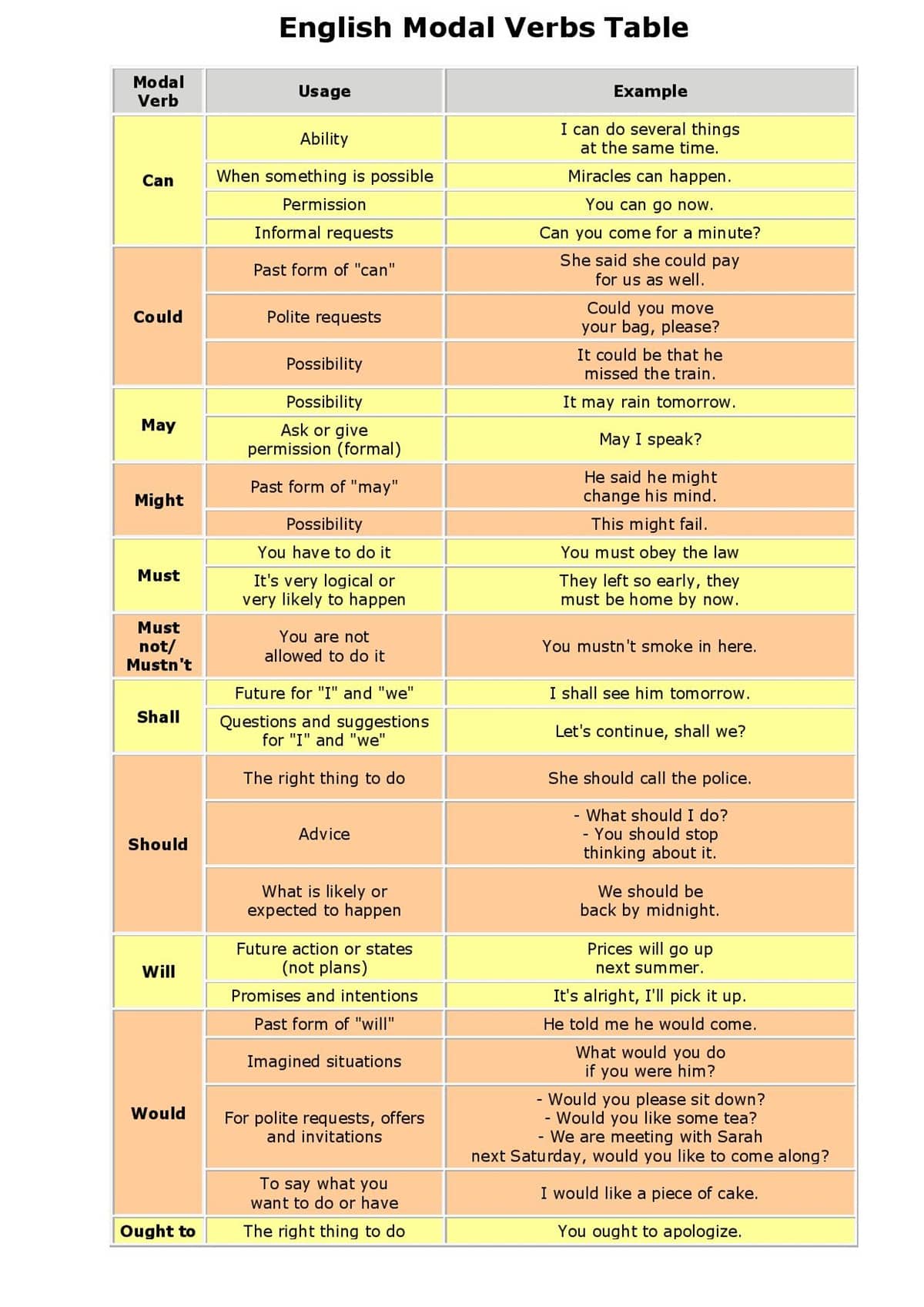 Must and Had to

The modal must expresses obligation or necessity: You must use this form; We must try to escape. It can also express a confident assumption (the epistemic rather than deontic use), such as in It must be here somewhere.

An alternative to must is the expression had to  (in the present tense sometimes have got  to), which is often more idiomatic in informal English when referring to obligation. This also provides other forms in which must is defective and enables simple negation.

When used with the perfect infinitive (i.e. with have and the past participle), must expresses only assumption: Sue must have left means that the speaker confidently assumes that Sue has left. To express obligation or necessity in the past, had to or some other synonym must be used.

The formal negation of must is must not (contracted to mustn’t). However the negation effectively applies to the main verb, not the modality: You must not do this means that you are required not to do it, not just that you are not required to do it. To express the lack of requirement or obligation, the negative of have to or need can be used: You don’t have to do it; You needn’t do it.

The above negative forms are not usually used in the sense of confident assumption; here it is common to use can’t to express confidence that something is not the case (as in It can’t be here or, with the perfect, Sue can’t have left).

Mustn’t can nonetheless be used as a simple negative of must in tag questions and other questions expressing doubt:

We must do it, mustn’t we? Mustn’t he be in the operating room by this stage?

Ought to and Had better

Ought  is used with meanings similar to those of should  expressing expectation or requirement. The principal grammatical difference is that ought is used with the to-infinitive rather than the bare infinitive, hence we should go is equivalent to we ought to go. Because of this difference of syntax, ought is sometimes excluded from the class of modal verbs, or is classed as a semimodal.

The reduced pronunciation of ought to is sometimes given the eye dialect spelling oughta.
Ought can be used with perfect infinitives in the same way as should (but again with the insertion of to): You ought to have done that earlier.

The negated form is ought not or oughtn’t, equivalent in meaning to shouldn’t (but again used with to).

The expression had better has similar meaning to should and ought when expressing recommended or expedient behavior: I had better get down to work (it can also be used to give instructions with the implication of a threat: you had better give me the money or else). The had of this expression is similar to a modal: it governs the bare infinitive, it is defective in that it is not replaceable by any other form of the verb have, and it behaves syntactically as an
auxiliary verb. For this reason the expression had better, considered as a kind of  compound verb, is sometimes classed along with the modals or as a semimodal.

The had of had better can be contracted to ‘d, or in some informal usage (especially American) can be omitted. The expression can be used with a perfect infinitive: You’d better have finished that report by tomorrow. There is a negative form hadn’t better, used mainly in questions: Hadn’t we better start now? It is more common for the infinitive to be negated by means of not after better: You’d better not do that (meaning that you are strongly advised not to do that). 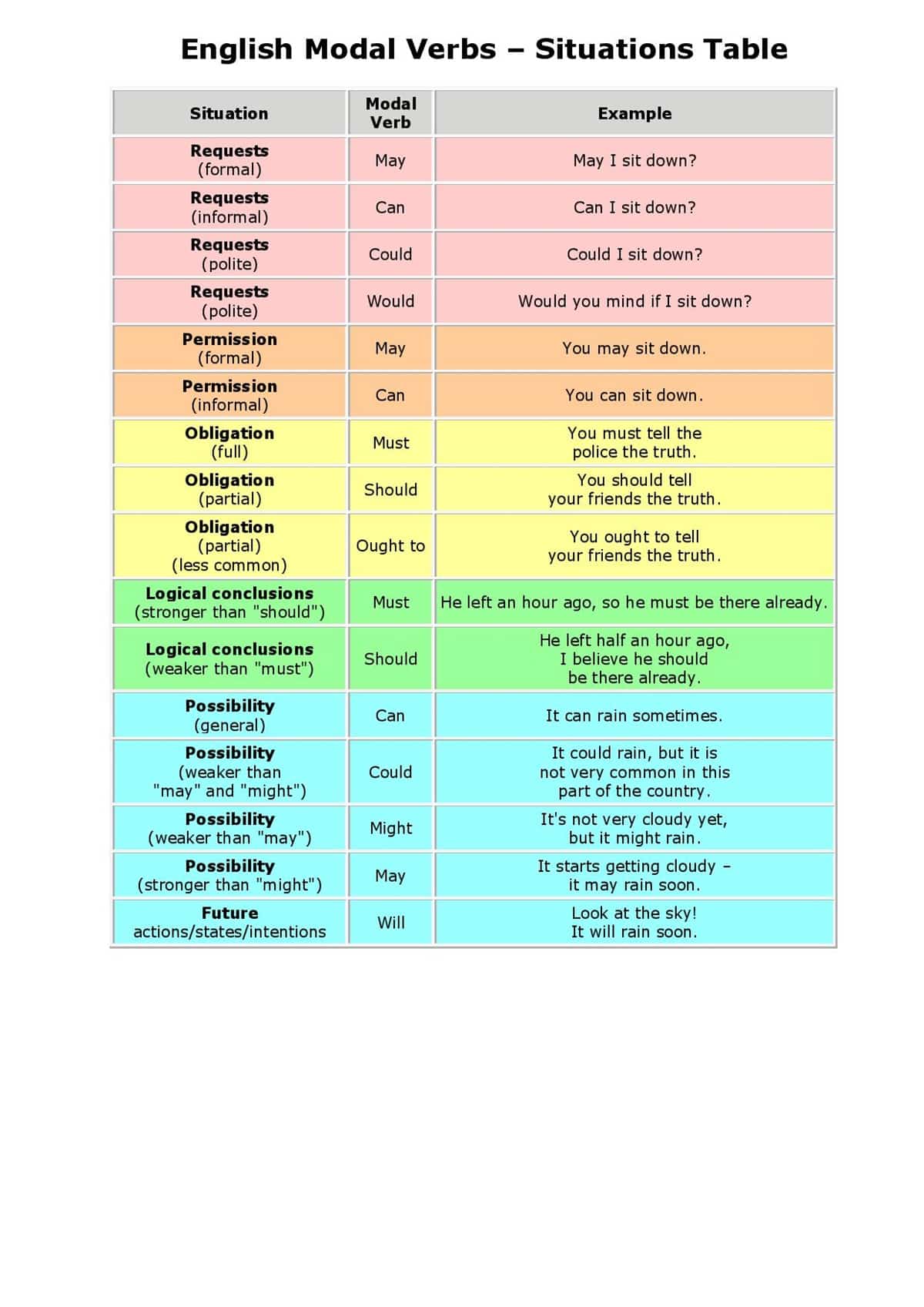 How can I develope my english knowledge

I want to be involved please!!

Thank you for helping to revise my English Writing Skill. Luckily today I found your website and spent some time to learn. From today, I will bookmark your site and regular follow your publications