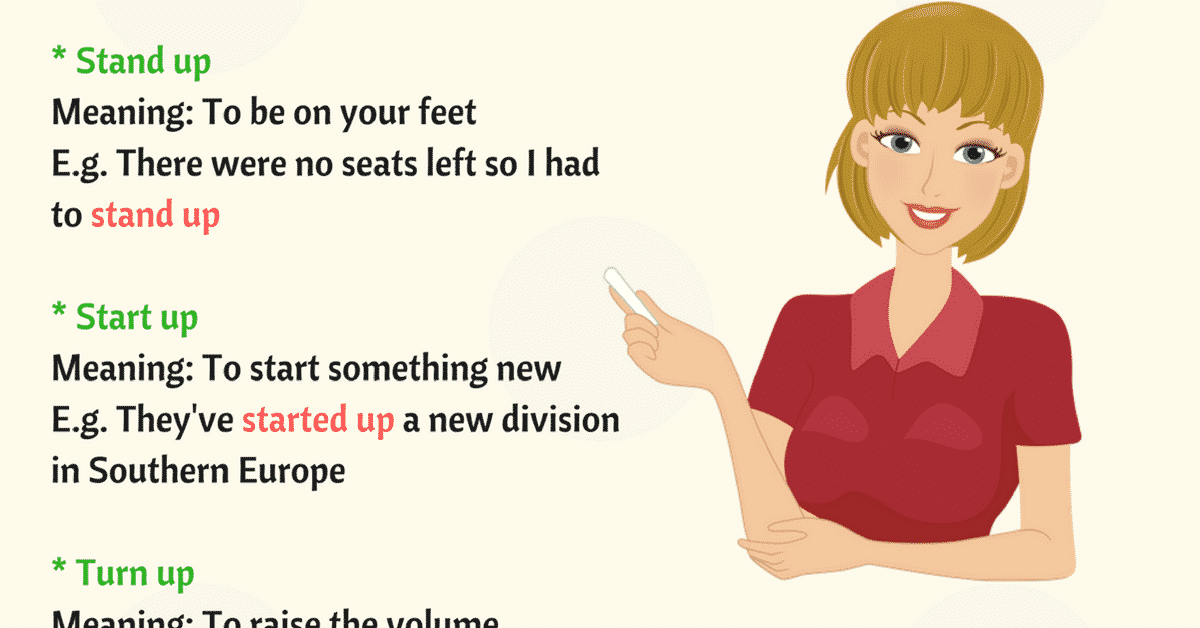 Learn Common Phrasal Verbs with UP in English with Meaning and Examples.

Up for movement; Up for increasing or improving; Up for completing; ending; Up for …

Here is an English lesson on some of the most common phrasal verbs made from the preposition UP.

Common Phrasal Verbs with UP

E.g. The car blew up after it crashed into the wall.

E.g. We have built up the business over the years and it now employs over 20 people.

E.g. It’s important to build your muscle strength up over time.

Meaning: Destroy something completely with fire

E.g. The spacecraft burned up as it entered the earth’s atmosphere.

E.g. The way he treats me really burns me up.

Meaning: Have a high temperature

E.g. I’m going to call up and cancel my subscription.

Meaning: Bring back to your mind

E.g. The smell of the sea called up memories of her childhood.

Meaning: Reach somebody who’s in front of you

Meaning: To reach the same level as somebody who was better

E.g. After missing a term through illness he had to work hard to catch up with the others.

Meaning: To do something that you have not been able to do recently

E.g. I need to catch up on my reading for English class.

Meaning: To make sure that somebody is doing what they should be doing

E.g. My mother is always checking up on me.

Meaning: To find out if something is true or correct

E.g. I need to check up on a few things before I can decide.

Meaning: To make someone happier

E.g. Can you chop up some tomatoes for me?

E.g. I’m afraid I can’t make the meeting tomorrow. Something has come up.

E.g. We can divide up the commission among the sales staff.

Meaning: Force up the prices or costs

E.g. The uncertainty in the markets is driving up labour costs.

E.g. Do you know how to do up your seat belt?

Meaning: Arrange hair so that it’s tied or fastened close

E.g. Her shiny dark hair was done up in a ponytail.

Meaning: To repair and decorate a house, etc.

E.g. He makes money by buying old houses and doing them up.

Meaning: To wear a fancy dress, a costume to disguise yourself

E.g. He dressed up as a pirate, for the party.

E.g. There’s no need to dress up, girl—come as you are.

Meaning: To eat all the food that you’ve been given

E.g. If you eat up all your food, you can have dessert.

E.g. We ended up going to the theatre instead of the gallery.

Meaning: Get out of bed

E.g. I got up early this morning and went for a walk.

Meaning: To stop doing something

E.g. The price of gas went up in March.

Meaning: To become an adult

E.g. I’ll heat the soup up for lunch.

Meaning: To do something faster, to get ready faster

E.g. Could you please hurry up?!

Meaning: To make something more fun

E.g. Let’s liven this party up with a game.

E.g. Did you look up the telephone number of the restaurant?

Meaning: Make an arrangement to meet

E.g. What time should we meet up on Wednesday?

Meaning: Start to talk freely about something

E.g. She hates to open up and discuss her feelings.

E.g. I’ll help you set up for the party as soon as I get home.

E.g. He showed us up when he arrived drunk and started arguing.

Meaning: To speak with a stronger voice

E.g. You need to speak up for people to understand you.

Meaning: To go faster in a vehicle

E.g. He quickly sped up to sixty miles an hour.

Meaning: To be on your feet

E.g. There were no seats left so I had to stand up.

Meaning: To start something new

E.g. They’ve started up a new division in Southern Europe.

Meaning: To raise the volume

E.g. I like to turn the stereo up when nobody is home.

E.g. Would you like me to warm your tea up?

Meaning: Write a report or minutes

E.g. It’ll take him at least a week to write up his findings.

Meaning: Cause to move backward

E.g. Tim backed up without looking and ran over his laptop.

Meaning: Support or help someone

E.g. The rebels backed up their demands with threats.

E.g. They agreed to draw up a formal agreement.

E.g. They fixed up the house before they moved in.

Common Phrasal Verbs with UP | Picture 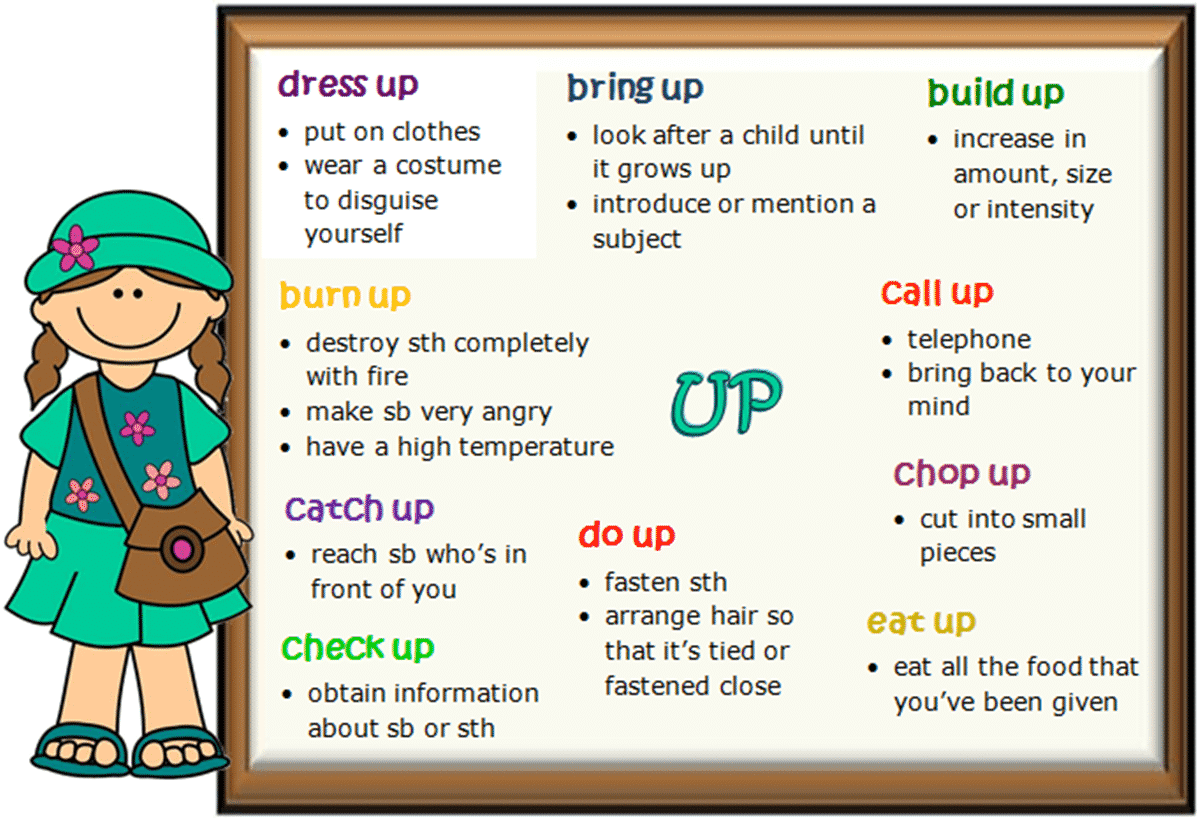 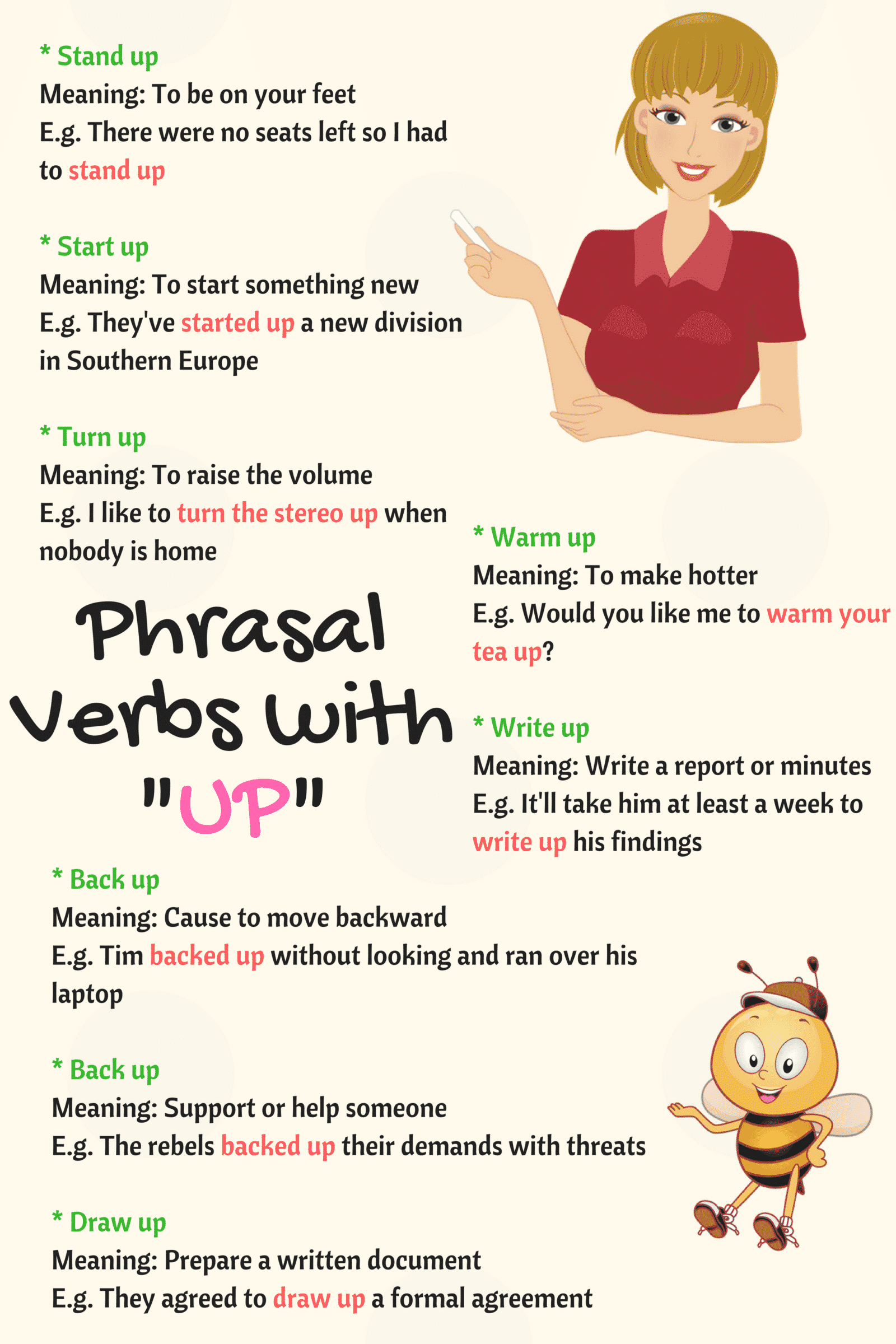