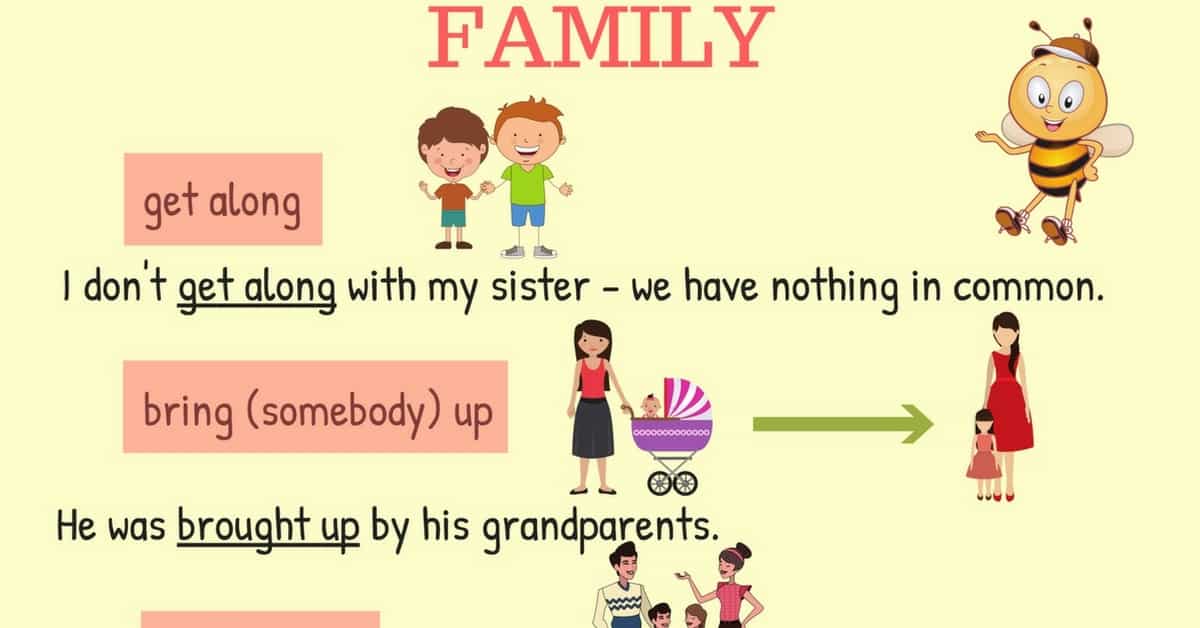 Learn Phrasal Verbs about Family, Friends and Lovers with their meaning and examples in English.

Here are some phrasal verbs that we can use when talking about relationships we have with other people.

Be given the name of another person

I was named after my grandfather John.

He was brought up by his grandparents.

Argue with somebody and stop being friendly with them

My father fell out with one of his brothers and they didn’t speak for years.

Have a good, friendly relationships with somebody

I don’t get along with my sister – we have nothing in common.

Meet together, having planned it before

The whole family needs to get together to decide what to do about the trip.

Prefer to be called by a certain name

My full name is Isabel but I go by Isa. My brother Jonathan goes by John.

Gradually begin to have a less close relationship

He said he and wife Brenda had been growing apart for at least a year.

Develop from being a child to being an adult

I grew up in Chicago.

Care for or be in charge of somebody

My eldest sister looked after me very well. She’s an excellent cook.

I’ve always looked up to my brother for his courage and determination.

Be similar in character/ appearance to an older family member

Jennie really takes after her mother.

Criticize somebody for their actions

My dad told me off for swearing.

Receive money, land, or property from someone after they have died

She’ll come into quite a lot of money when her father dies. 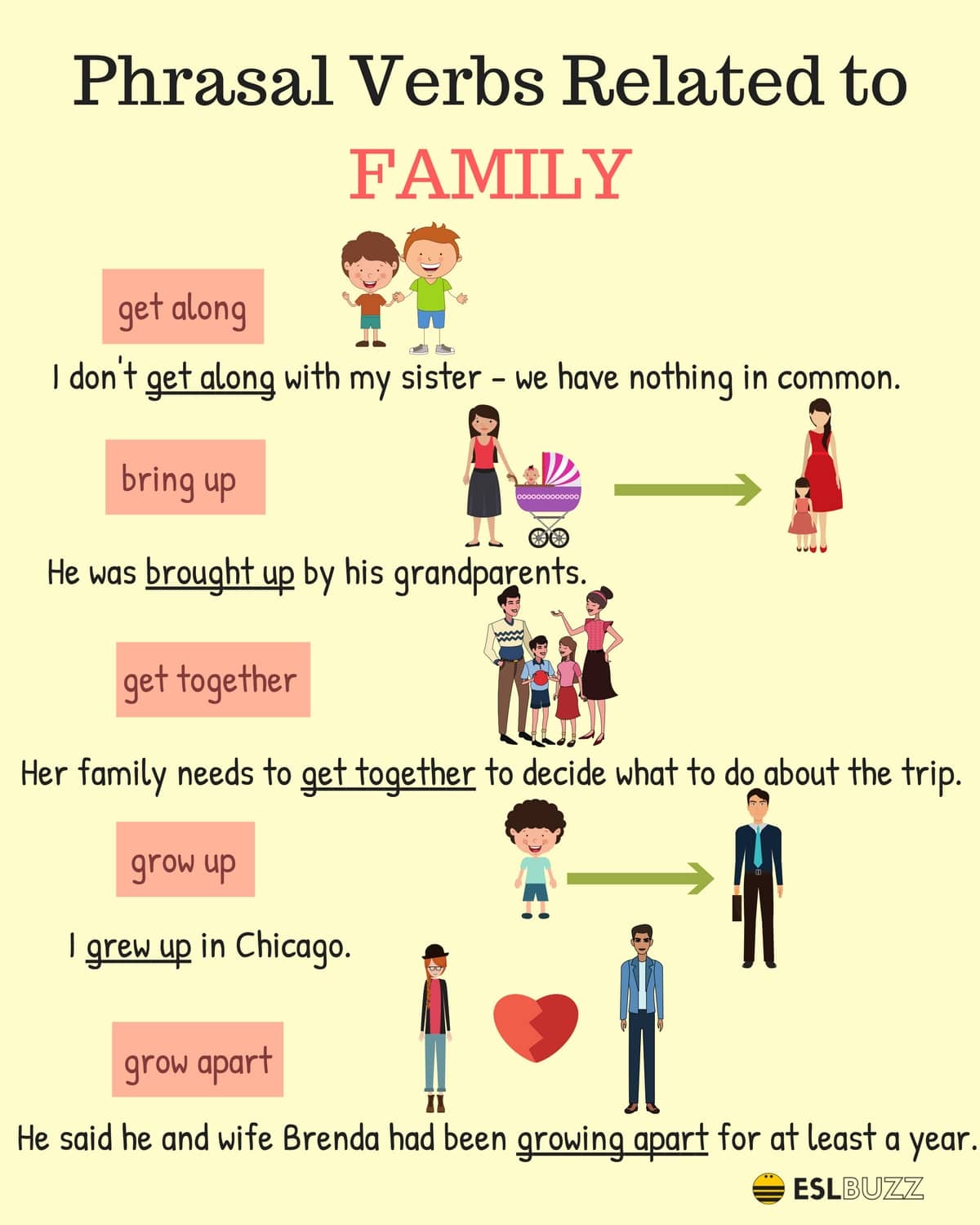 Have a good relationship with somebody

I get on very well with James.

No longer speak/ be friends with somebody after having an argument

Carrie’s always falling out with people.

Reconcile or end a dispute with somebody

I fight with my brother all the time, but we always make up soon afterwards.

Be in a romantic relationship with somebody

We went out for a meal and then on to a movie.

End a relationship with somebody

The couple broke up last year.

Spend time with somebody

I spent a lot of time listening to records and just hanging out with friends.

Meet someone in order to do something together

We often meet up after work and go for a drink.

That was the summer I worked at the fairground, and met and fell for Lucy.

Steve’s parents split up when he was four.

I bumped into Jean in town.

Stop having a friendship with somebody

I knew deep down that I should give him up.

I knew you’d hit it off with Mike. 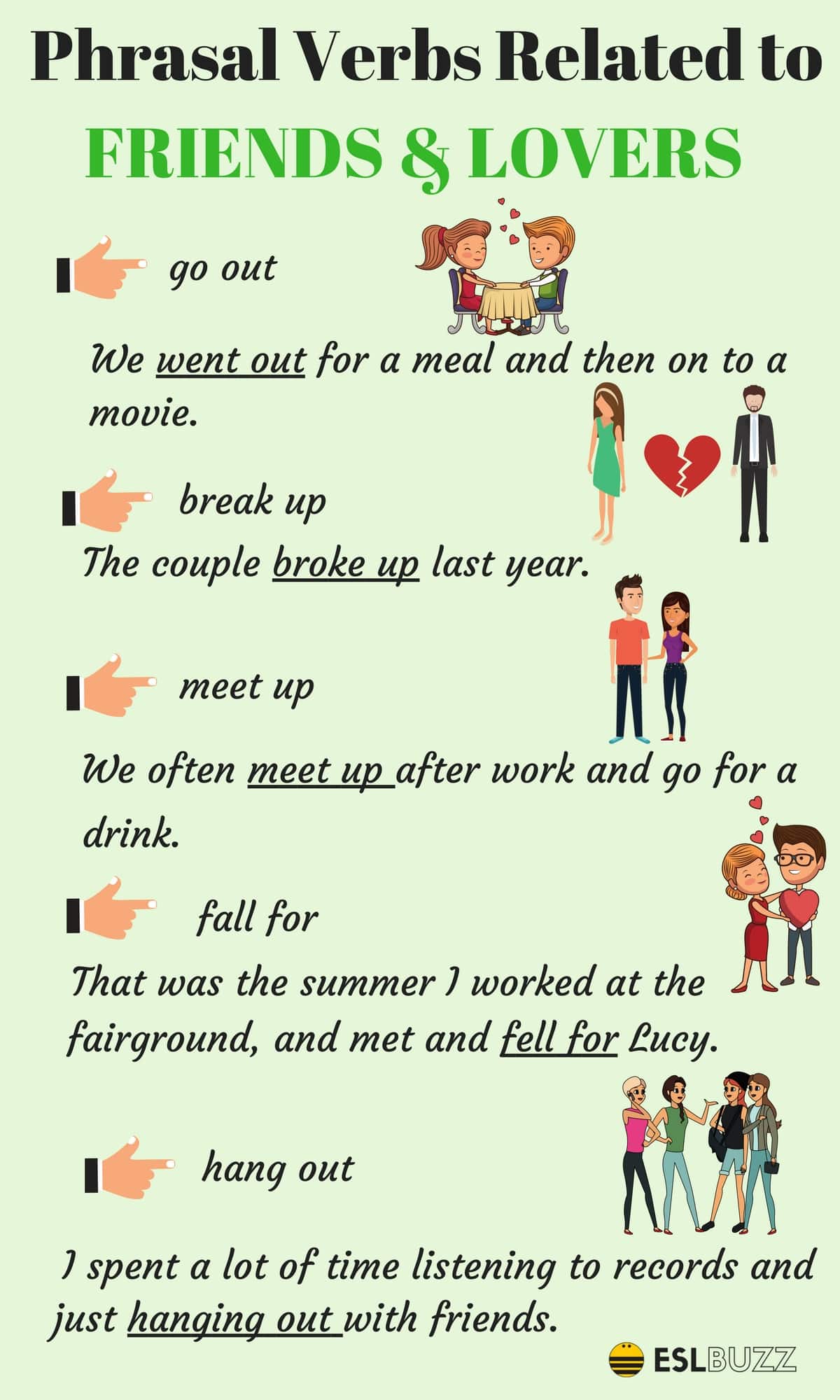