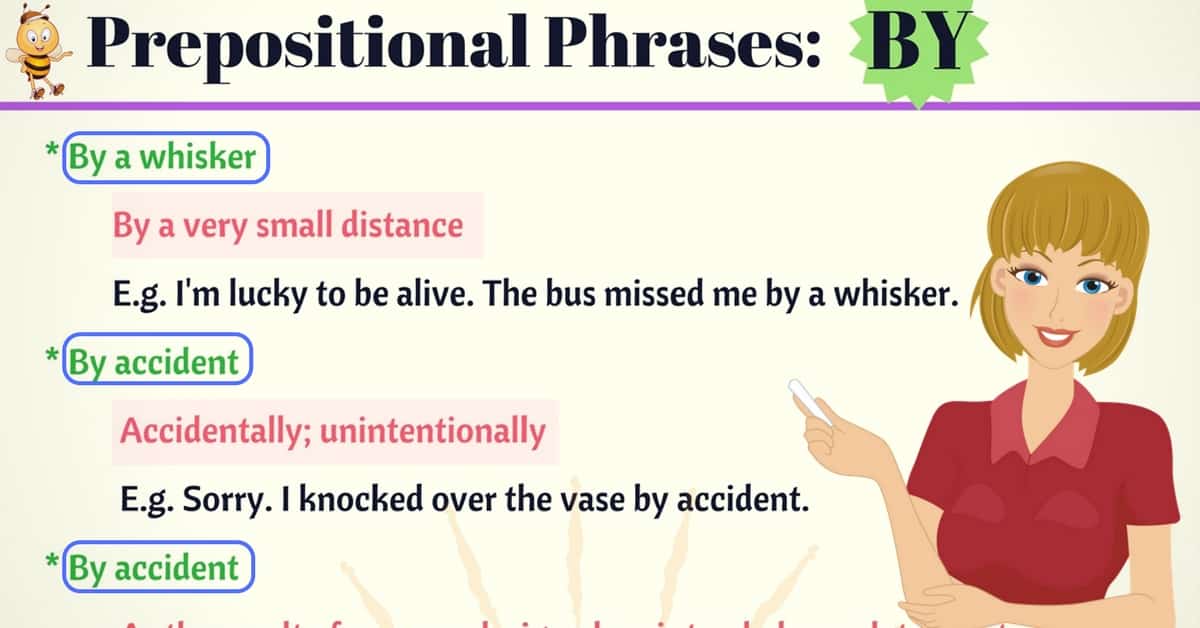 Prepositional phrases with by are a common aspect of the English language that are used to indicate a variety of different relationships between words in a sentence. These phrases often indicate the means or agent by which an action is performed, the person responsible for an action, or the time when an action will occur. Some examples of prepositional phrases that include the word “by” include “by car,” “by phone,” “by the deadline,” “by myself,” “by the end of the month.”

The following article provides the list of common prepositional phrases with BY with meaning & examples and ESL image.

Prepositional Phrases with BY

Meaning: By a very small distance

E.g. I’m lucky to be alive. The bus missed me by a whisker.

E.g. Sorry, I knocked over the vase by accident.

Meaning: As the result of some undesigned, unintended, unrelated, natural, or random occurrence

E.g. The car got totaled by accident; a giant snowdrift fell off the church roof.

Meaning: By chance; unexpectedly; as the result of an unrelated series of events

E.g. She overheard the information by accident.

E.g. It was, by and large, an unexceptional presentation.

E.g. Are you by any chance looking for a new staff member?

Meaning: In absence of any opposing action

E.g. If we don’t do something, they’ll win by default.

Meaning: According to, or as a matter of, definition

E.g. Almost by definition, a conversation requires both parties to accept each other’s viewpoints to some extent.

E.g. Paris is by far the largest city in France.

Meaning: Manually; without the use of automation or machines

E.g. The computers went down and they had to do all the bookkeeping by hand that day.

Meaning: Knowing completely; as having committed completely to memory

E.g. He used to live in that town, and he still knows all the streets by heart.

Meaning: By accident; without intention to do so

E.g. Today I took your packed lunch to work by mistake.

Meaning: Certainly not; definitely not

E.g. By no means am I suggesting that euthanasia should be outlawed, but rather that we should look at its inherent risks.

Meaning: At some time in the near past

E.g. My parents should have arrived by now. I wonder what’s keeping them.

Meaning: Alone; without assistance or help from others

E.g. You ate the whole thing by yourself?

E.g. He sat by himself in the corner, waiting quietly.

Meaning: Via a train

Meaning: Via a sailboat or sailing ship

E.g. It took many weeks to cross the Atlantic by sail.

Meaning: Via a steam-powered boat or ship

Meaning: Via a steam train

E.g. This line once took passengers by steam to the frontier.

E.g. His mother will be coming for dinner tomorrow, and, by the way, she volunteered to bring dessert.

E.g. Although he was a gifted musician, he was a plumber by trade and never played music professionally.

Prepositional Phrases with BY | Picture

Common Prepositional Phrases with BY 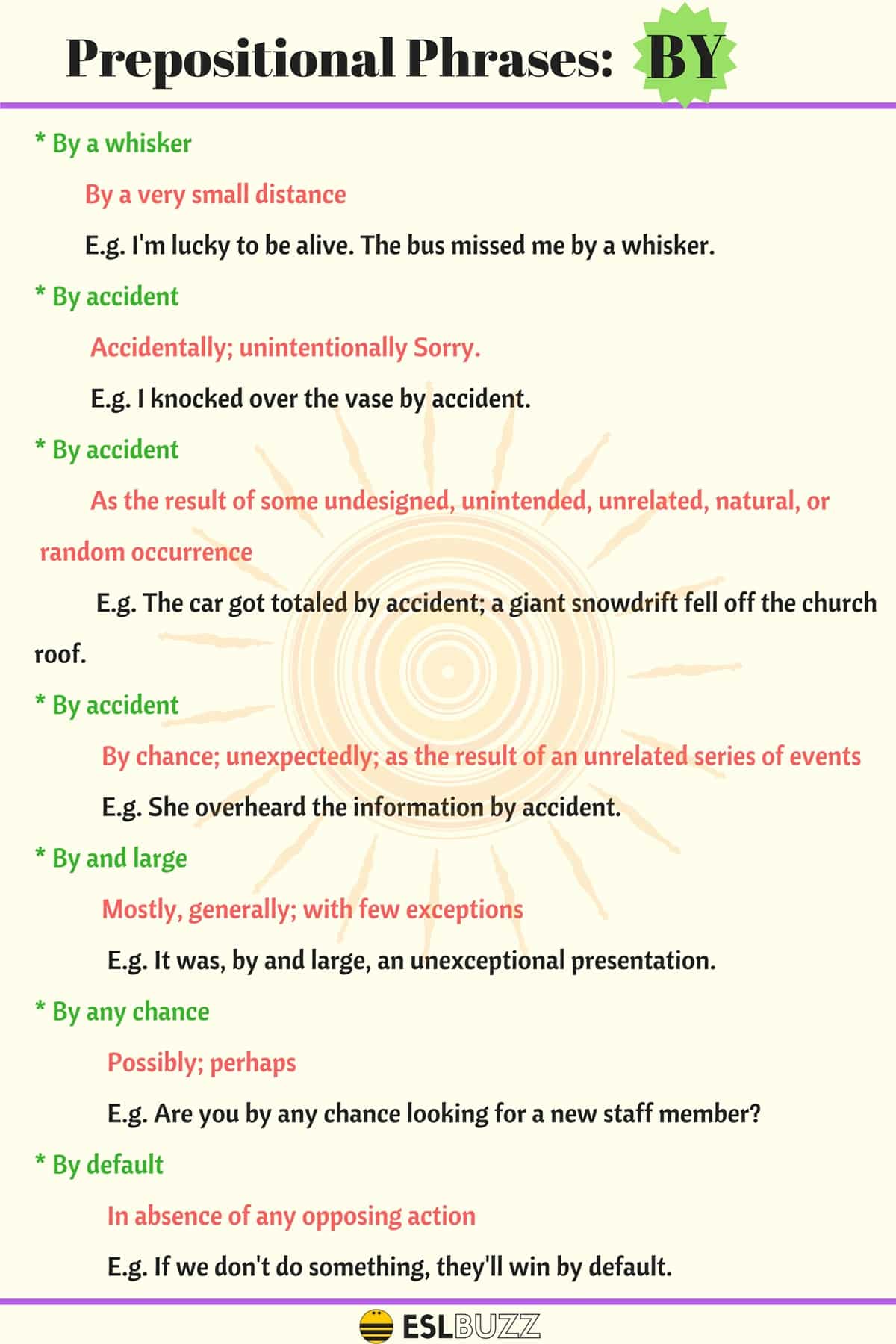 To Whom It May Concerned:
Hope that you could add more “Tenses” and give more examples for students to understand. Thank you!

Such a great article! Thank you for sharing. I often read blogs and articles like this to prep up my communication skills in the professional space.

Another amazing site I have been referring to is <a href = “https://www.pracup.com/”> PracUp! </a>
They have some easy-to-follow and pretty effective courses which help in learning a lot about English, interviews, as well as other corporate skills like emails and negotiations.

﻿Do check them out!