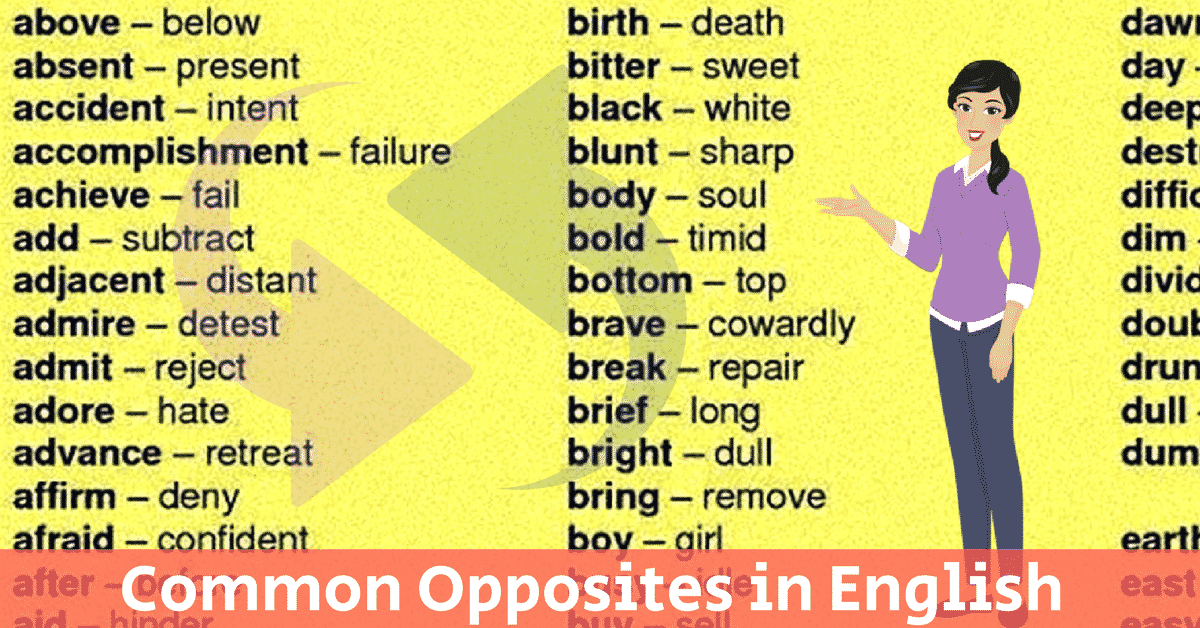 An antonym is a word that has the opposite meaning of another word. Below is the list of common opposites in English you should learn.

Opposite Words with Examples

You must be able to speak French for this job.
She was unable to hide her excitement.

I heard a strange noise coming from the room above.
I could hear voices in the courtyard below my window.

Students who are regularly absent from school.
The gases present in the Earth’s atmosphere.

Fish are abundant in the lake.
Food was often scarce in the winter.

Rick accepted her offer of coffee.
His school reports said that he never declines a challenge.

If you add all these amounts together you get a huge figure.
If you subtract 6 from 9, you get 3.

A quarter of all workers admit to taking time off when they are not ill.
The department denies responsibility for what occurred.

She adores working with children.
I hate to see you unhappy.

Her experience meant that she had a big advantage over her opponent.
The disadvantage of the material is that it fades in strong sunlight.

Mr. Howard has declared that he is against all forms of racism.
Everybody is always for peace.

We saw several houses but none we really liked.
Have you done all your homework?

There have been several attacks on foreigners recently.
We need to defend against military aggression.

I saw her a few days before she died.
I go swimming every day after work.

They belong to the rich man who lives in the big white house there among the trees.
He was quite an old little man and his head was long and entirely bald.

What’s your date of birth?
Cancer is the leading cause of death in women.

I trudged through a boring day, knowing I’d return to an empty apartment as Betsy was off to Los Angeles for the entire week.
Dr. Bell told me many interesting things about his work.

I waited for them at the bottom of the hill.
She was standing at the top of the stairs.

What the company has done is perfectly legal.
They were involved in illegal activities.

He stretched out his long legs.
I’ve only been in Brisbane a short time.

The car has a maximum speed of 120 mph.
The minimum number of students we need to run the course is fifteen.

Property is cheaper in Spain than here.
Petrol is becoming more and more expensive.

Despite the chilly autumn afternoon, she was wearing a thin cotton dress.
I hope we get some warm weather soon.

Let’s get in out of this cold wind.
In dry gourds, they were served a hot tea made from the ground leaves of something Bordeaux called the lip fern.

It was a very complex relationship between two complex people.
I’m sure there’s a perfectly simple explanation.

At the kitchen door she nearly ran into a dark form.
With his small frame and bright eyes, he’d always reminded her of an elf of some sort.

The exam was very difficult.
Finishing the task will be easy.

The bus was ten minutes early.
You’re half an hour late.

The fuel tank’s almost empty.
The kitchen was full of smoke.

The dome is tiled on the exterior.
The interior of the church was dark.

I’m a fast learner.
The wound was slow to heal.

Arthur was a very gentle, caring person.
Rugby is a very rough sport.

Giant cabbages grew in the garden.
You only need to use a tiny amount of salt.

The camp was surrounded by a high fence.
The sun was low in the sky.

The population increased dramatically in the first half of the century.
The number of people who have the disease has decreased significantly in recent years.

Los Angeles is the second largest city in the US.
The T-shirt was too small for him. 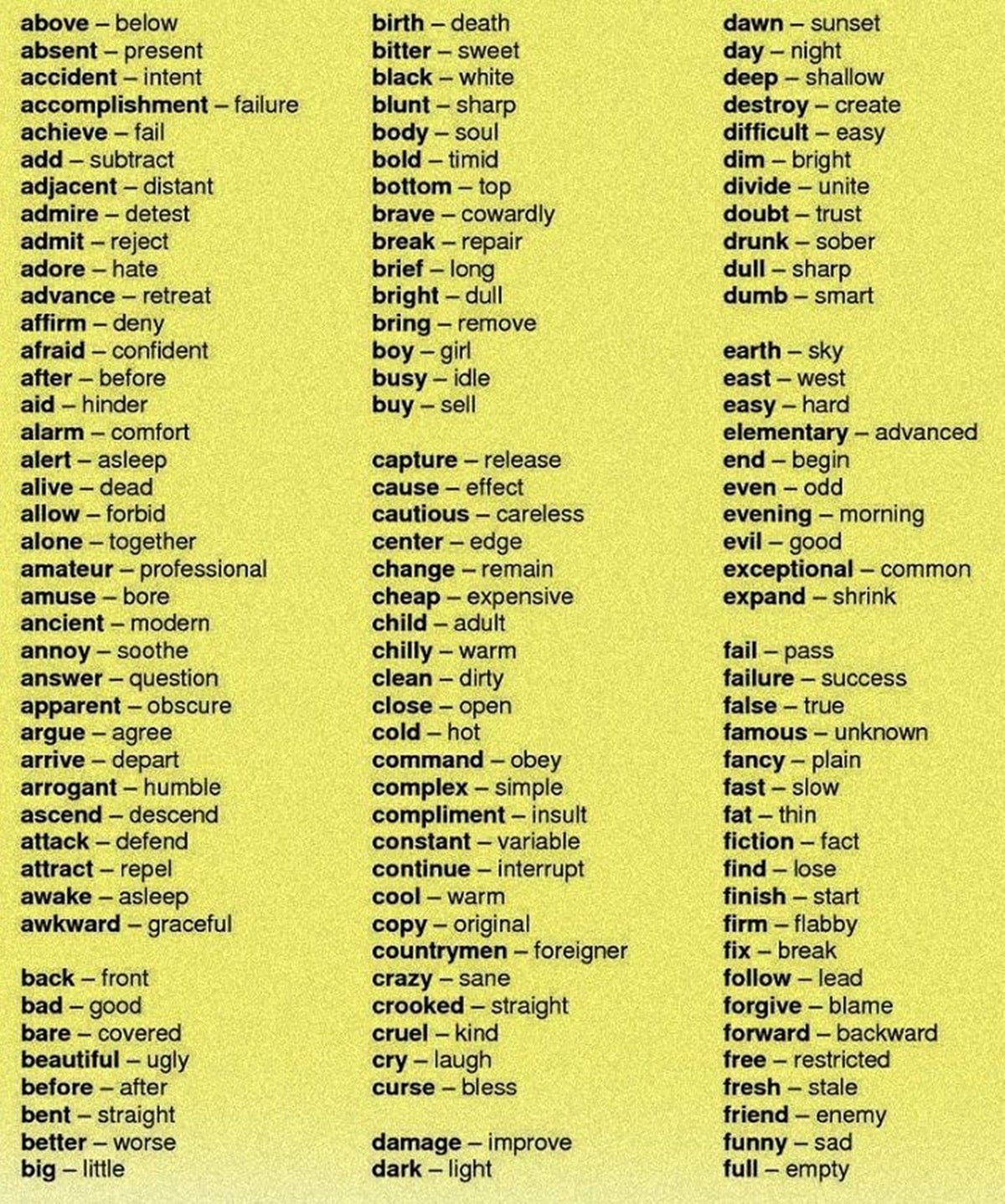 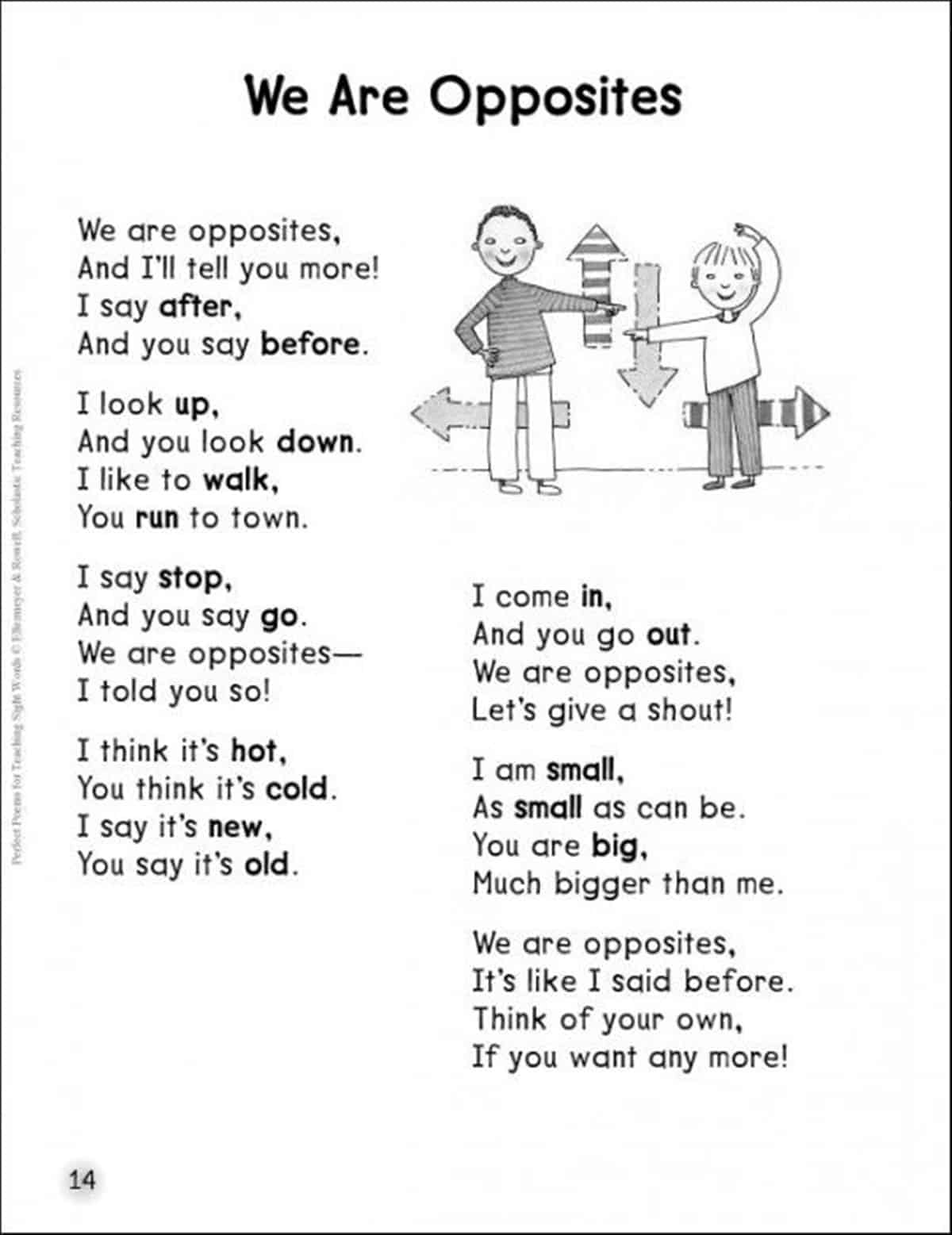 I need to learn this best english