Learn List of 70 Common Prepositional Phrases with IN in English.

Common Prepositional Phrases with IN

Here is list of commonly used English collocations with the preposition IN.

E.g. I’m not in a good mood today so leave me alone, please.

E.g. The whole house is in a mess. We need to tidy it today.

E.g. Can money buy happiness? In a way, I think so.

E.g. In addition to feeling tired, I felt a bit sick.

E.g. It’s a busy restaurant so we should book a table in advance.

E.g. I’m in agreement with many of the views of my classmates.

E.g. The interview was, in brief, a complete disaster.

E.g. Take an umbrella in case it rains.

E.g. Our president is too incompetent to be in charge of the economy.

E.g. I have a lot of in common with my best friend.

E.g. The weather in Scotland is awful in comparison with Italy.

E.g. In conclusion, I believe we should do more to help the poor.

E.g. I told you that story in confidence but you told everyone.

E.g. He’s not in control of his emotions so he gets upset very easily.

E.g. If you don’t change your diet, you’re in danger of being very ill.

E.g. He’s in debt, which means he owes money to the bank.

E.g. She described what had happened to her in detail.

E.g. If you’re in difficulty, I’m happy to give you a helping hand.

E.g. Celebrities often go out in disguise in order to avoid paparazzi.

E.g. The festival is in doubt on account of the huge storm.

E.g. I washed my father’s car in exchange for some pocket money.

E.g. Beards were in fashion last year but they’re out of fashion now.

E.g. There’s a bus stop right in front of my house, which is handy.

E.g. I’m not angry but in future, text me if you’re going to be late.

E.g. In general, I think that people in Ireland are very friendly.

E.g. My car is in really bad condition so I need to get it repaired.

E.g. It’s better to write in pencil so that you can correct it later.

E.g. I fell in love with her the moment I met her.

E.g. I eat meat in moderation as I think too much is bad for you.

E.g. Study every day and your level of English will improve in no time.

E.g. I enjoy hanging out with friends in my free time.

E.g. I haven’t got a penny to my name this month. In other words, I’m broke.

E.g. The vet decided to put down the animal as it was in a lot of pain.

E.g. I enjoyed my trip to London; in particular, I loved Camden Town.

E.g. I’ve spoken to him on facebook but never met him in person.

E.g. In theory, summers should be warm and sunny but it never happens here.

E.g. There’s not a single corrupt politician in prison, which is simply wrong.

E.g. I have to speak to you in private. Do you have a minute?

E.g. I teach her English and she teaches me Spanish in return.

E.g. It’s in your best interest to do a bit of exercise every day.

E.g. In my opinion, Florence is the most beautiful city in the world.

E.g. I try to buy vegetables and fruits that are in season.

E.g. I told you that story in secret and you told half of the world!

E.g. The defendant claimed he had been acting in self-defence.

E.g. In some respects, I had been expecting Brexit but I’m still surprised.

E.g. I wanted to buy the jacket but the shop didn’t have my size in stock.

E.g. There’s nothing better than going to the beach in summer.

E.g. He insulted her appearance and she left the party in tears.

E.g. There was a feeling of tension in the air when he entered the room.

E.g. It was hard in the beginning but I soon adapted to life in Ireland.

E.g. She hasn’t told me anything. I’m in the dark about her decision.

E.g. In the end, family and friends are the most important people in life.

E.g. I’m in the habit of waking up early and going for a run.

E.g. I’m not in the mood for English class now. I’d prefer to watch a movie.

E.g.Do you like spending time in the mountains or do you prefer the sea?

E.g. Silly celebrities are often in the news in my country. It’s a shame.

E.g. Stop walking around the flat in the nude – the neighbours can see you.

E.g. I left my house early and arrived in time to have a coffee before work.

E.g. I’m not in touch with him any longer. We lost contact a few years ago.

E.g. I’ll give you a call if I’m in town next week. It would be nice to catch up.

E.g. I broke the chocolate bar in two and gave one half to my nephew.

E.g. I tried to convince her to go out but all of my efforts were in vain.

Common Prepositional Phrases with IN | Image 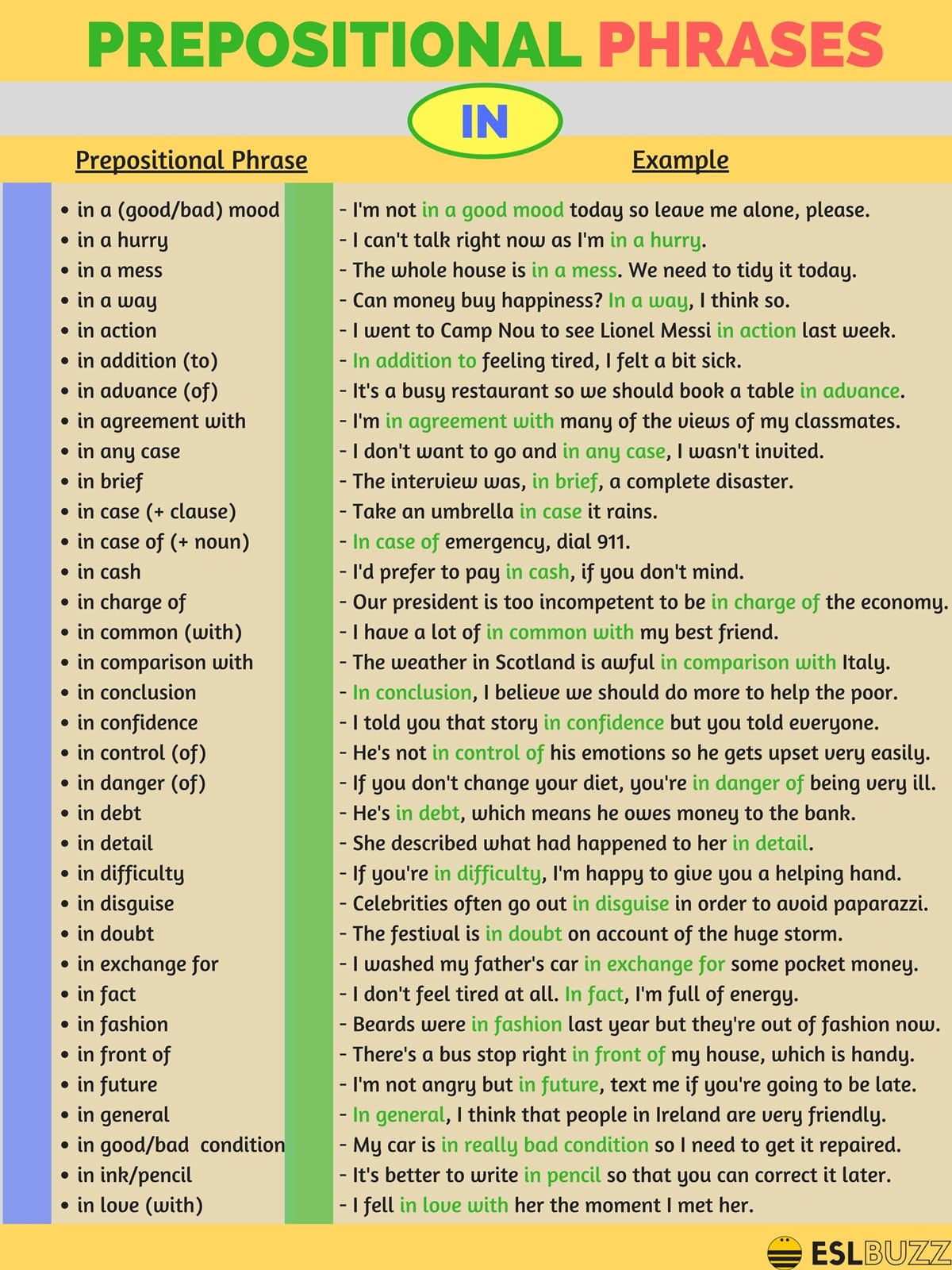 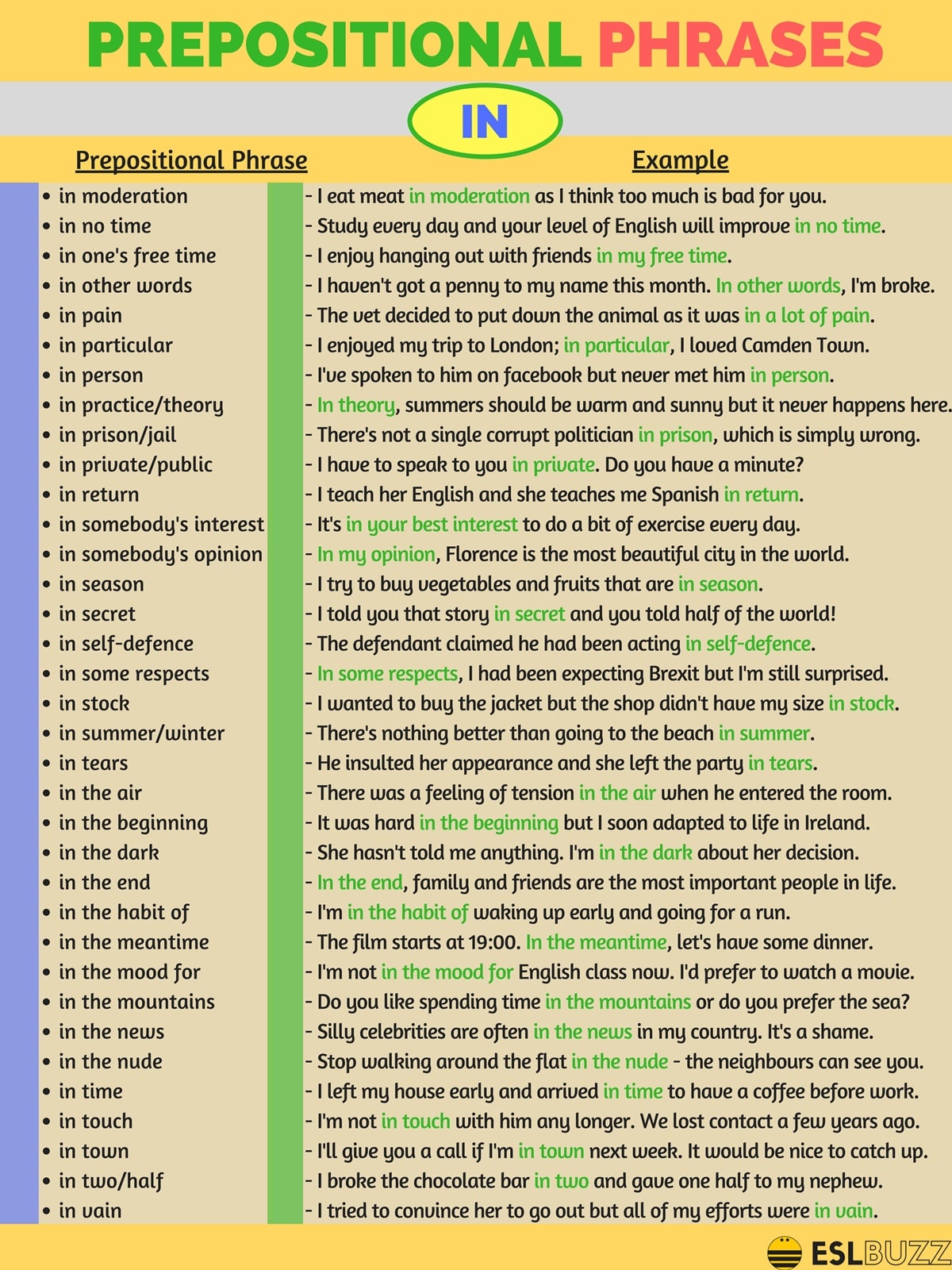 If the meaning of these prepositional phases add ,it will be easy to understand

By far the best, thank you very much for your services 👍