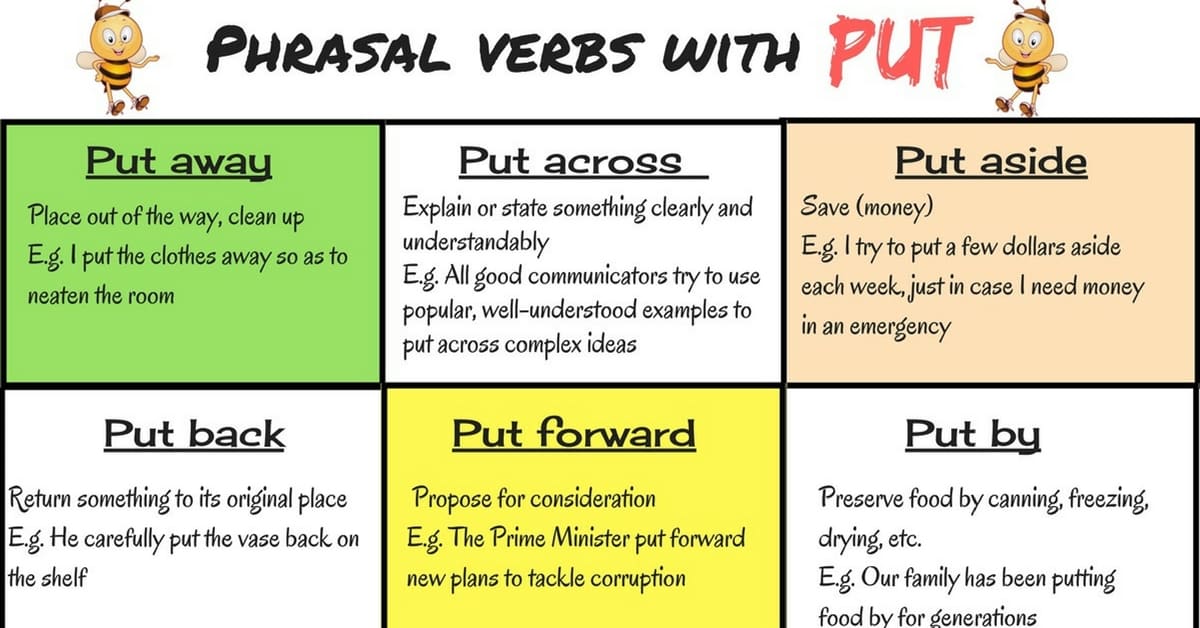 In this lesson, you will learn commonly used phrasal verbs with PUT.

List of common phrasal verbs with PUT in English

E.g. All good communicators try to use popular, well-understood examples to put across complex ideas.

E.g. I try to put a few dollars aside each week, just in case I need money in an emergency.

E.g. Let’s put our differences aside for the moment, and get this project finished.

E.g. I put the clothes away so as to neaten the room.

E.g. Preparing for the worst, they put away food for the winter.

E.g. You wouldn’t think such a small person could put away so much food.

E.g. After he was convicted, they put him away for 10 years.

E.g. He put away his opponent in the first round.

E.g. They put the game away by scoring three touchdowns in the fourth quarter.

E.g. He carefully put the vase back on the shelf.

E.g. Don’t forget that this Sunday we put the clocks back an hour.

E.g. Our family has been putting food by for generations.

E.g. I managed to put that transaction by accounts payable.

E.g. I have put a few hundred pounds by for a rainy day.

E.g. The Bow Spring put by to avoid colliding with the Manzanillo II.

E.g. They frequently put down their little sister for walking slowly.

E.g. The government quickly put down the insurrection.

E.g. Rex was in so much pain, they had to put him down.

E.g. Put down the first thing you think of on this piece of paper.

E.g. Don’t put the phone down. I want a quick word with him, too.

E.g. I’ve put myself down for the new Spanish conversation course.

E.g. BP are putting petrol and diesel down in what could be the start of a price war.

E.g. I had just put Mary down when you rang. So now she’s crying again.

E.g. The pilot managed to put down in a nearby farm field.

E.g. The taxi put him down outside the hotel.

E.g. I was unable to put down The Stand: it was that exciting.

E.g. I put him down as ignorant, but then discovered he is, in fact, a university professor!

E.g. Put me down for one of the drivers.

E.g. I put the high crime rate down to the high unemployment.

E.g. Don’t forget that this Sunday we put the clocks forward an hour.

E.g. Just put in the key for the ignition and turn it.

E.g. I’m going to the bank to put in for a transfer.

E.g. I put in an extra hour at work today.

E.g. The ship puts in to port today.

E.g. But there remain two problems to resolve before the plan can be put into practice.

E.g. Don’t put off your homework to the last minute.

E.g. The storm put off the game by a week.

E.g. Please be quiet. I’m trying to concentrate and you’re putting me off.

E.g. You must be putting me on.

E.g. Why are you putting on that silly voice?

E.g. I’ll put on some coffee for everybody.

E.g. The actors put on a show.

E.g. It is very important to put yourself across well at a job interview.

E.g. Don’t forget to put out the cat.

E.g. Don’t put out your back trying to lift that.

E.g. They worked for days to put out the brushfire.

E.g. Professor Jones is a good teacher. He knows how to put his ideas over to the students.

E.g. Would he go so far as to call the police? I wouldn’t put it past him.

E.g. Please hold the line a moment while I put you through to the sales office.

E.g. After all the grief my wife has put me through, I wonder why I’m still with her.

E.g. I’ll put it to the committee and see what they say.

E.g. We’ll need to put together a plan if we want to get this project finished.

E.g. Please put up your luggage in the overhead bins.

E.g. Many people put up messages on their refrigerators.

E.g. I think someone put him up to it.

E.g. Be sure to put up the tools when you finish.

E.g. We can put you up for the night.

E.g. That last fighter put up quite a fight.

E.g. The picture was put up for auction.

E.g. I put up with a lot of nonsense, but this is too much. 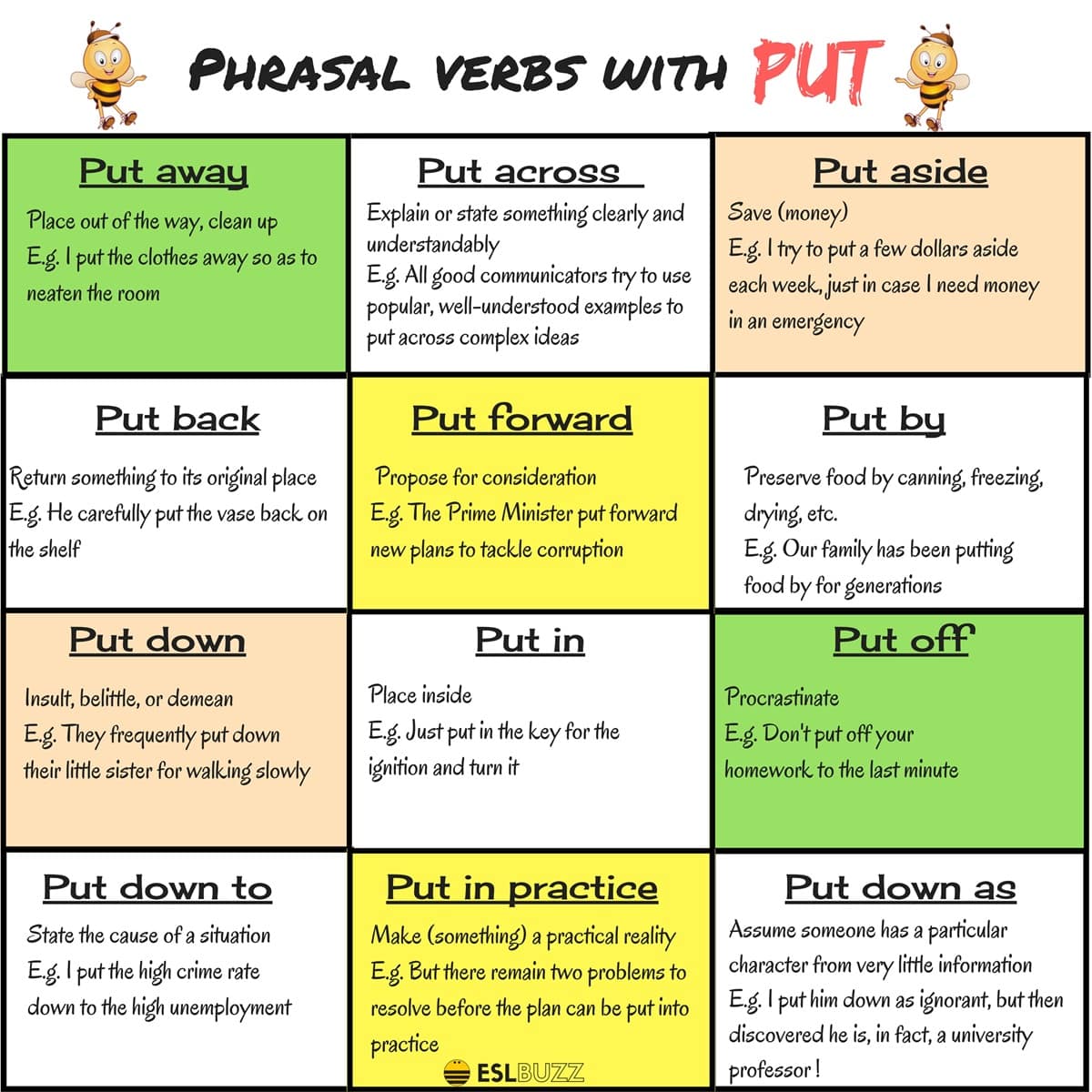