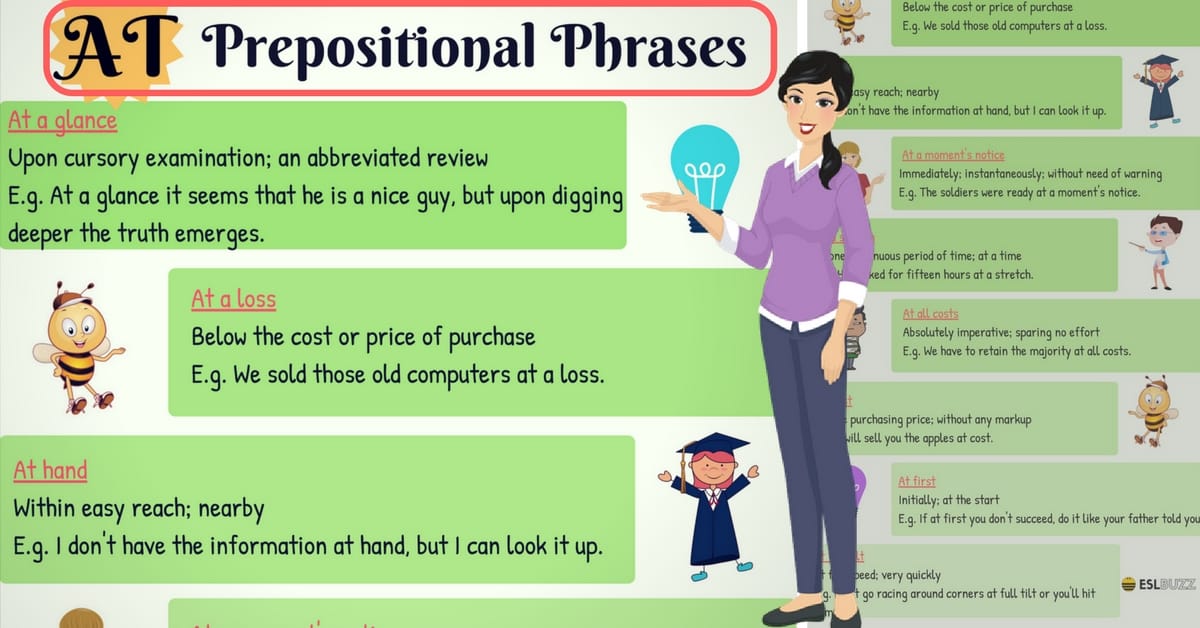 Common Prepositional Phrases with AT

Prepositional Phrases with At with Meanings

E.g. At a glance, it seems that he is a nice guy, but upon digging deeper the truth emerges.

E.g. We sold those old computers at a loss.

E.g. I have fixed the parts I understand, and the rest leaves me at a loss.

E.g. She was at a loss for words when she saw the number of people who had come to grieve for her husband.

E.g. The soldiers were ready at a moment’s notice.

E.g. He worked for fifteen hours at a stretch.

E.g. He manages to abstain from smoking for weeks at a time, but then gives in and starts again.

E.g. We have to retain the majority at all costs.

E.g. It’s hard to sleep with the neighbors playing the radio so loud and that dog barking at all hours.

E.g. Jim broke the window — or maybe it was John? At any rate, the window’s broken now.

E.g. She’s been keeping me at arm’s length all the time. She doesn’t want to get involved.

E.g. I will sell you the apples at cost.

E.g. If at first you don’t succeed, do it like your father told you.

E.g. At first glance it seems to be a reasonable idea. But we’ll see.

E.g. It looks like a normal car at first sight. But when we open the hood, we discover something quite new.

E.g. We only just managed to finish on time by working at full stretch since first thing in the morning.

E.g. Since noon she’s been working at full throttle on the calculations.

E.g. Don’t go racing around corners at full tilt or you’ll hit someone.

E.g. I don’t have the information at hand, but I can look it up.

E.g. I’m a vegetarian at heart – the thought of the death of animals for my food is abhorrent

E.g. Sorry Sir, I left my homework at home

E.g. I feel at home when I’m round my girlfriend’s house

E.g. The point at issue is whether we can afford to take on a new employee

E.g. For a nervous twenty-four hours, three wanted criminals were at large in the city

E.g. Some people support the measure, but the community at large will probably be against it

E.g. The city has five city council districts; however, the mayor is elected at large

E.g. Now that the dog has stopped barking, perhaps we can at last get some rest

E.g. After all their troubles, at last they lived happily ever after

E.g. I couldn’t count them all, but I think there must have been at least 500 people in attendance

E.g. He went on at length about his supposed qualifications

E.g. She led us through the tunnels for some time, until at length we reached a small door in the rock

E.g. I am really at loose ends about this choice; I am between the proverbial rock and hard place

E.g. There weren’t so many people at the concert – 40 at most

E.g. The witness’ statement seems to be at odds with the evidence, not a good sign for the prosecutor

E.g. Can you pat your head and rub your belly at once?

E.g. Tell the doctor to come at once. She is having a baby

E.g. She felt perfectly at one with nature

E.g. At one time, I could walk ten miles in a day, but I can’t any longer

E.g. A bigamist has two spouses at one time

E.g. The agency has been at pains to stress that its decisions are still based on sound science

E.g. Since discovering religion, she’s been at peace in her personal life

E.g. He was unhappy when he was alive, but now he’s at peace

E.g. I felt dizzy and fainting at places, but I still made it to the finish line

E.g. There are children at play in the street

E.g. At rest, the car is impressive, but when it’s moving, the sight is astounding

E.g. The entire population initially seemed at risk of infection

E.g. I left my history book at school

E.g. Most of the class was at sea after the first week

E.g. John will be at our service for the duration of the visit

E.g. Doesn’t he realize that all of our lives are at stake here too?

E.g. He went to a famous school, and a good one at that

E.g. If you need help, just call on Mike. He can come at the drop of a hat

E.g. The ball game is scheduled for Saturday, but we’re still at the mercy of the weather

E.g. The soldiers’ rifles were at the ready

E.g. It is a shame, his first day driving and he falls asleep at the wheel

E.g. We were thriving when Bill was at the wheel, but since the new CEO has started things have been going south

E.g. While we are not able to assist you at this point in time, we will be sure to call you if an opportunity arises

E.g. I feel lonely at times, but then somebody phones, or calls round, and I cheer up again

E.g. I’m writing my book at will – there’s no deadline or minimum word count

E.g. They’ve got a new photocopier at work.

E.g. Don’t interrupt me while I’m at work on my housing project.

E.g. It looks like rain, but let’s go out anyway. At worst, we’ll only get wet.

Common Prepositional Phrases with AT | Image 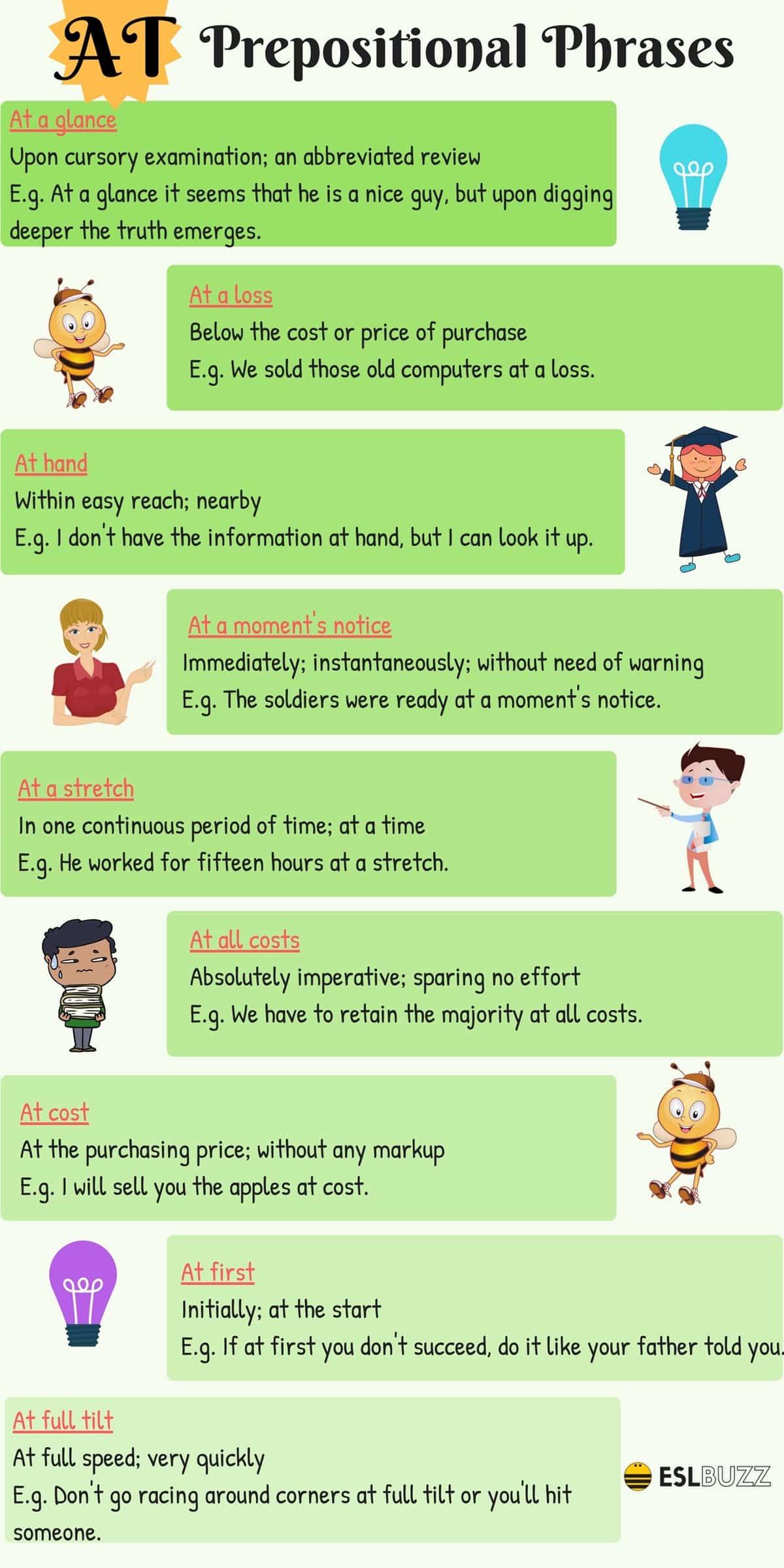