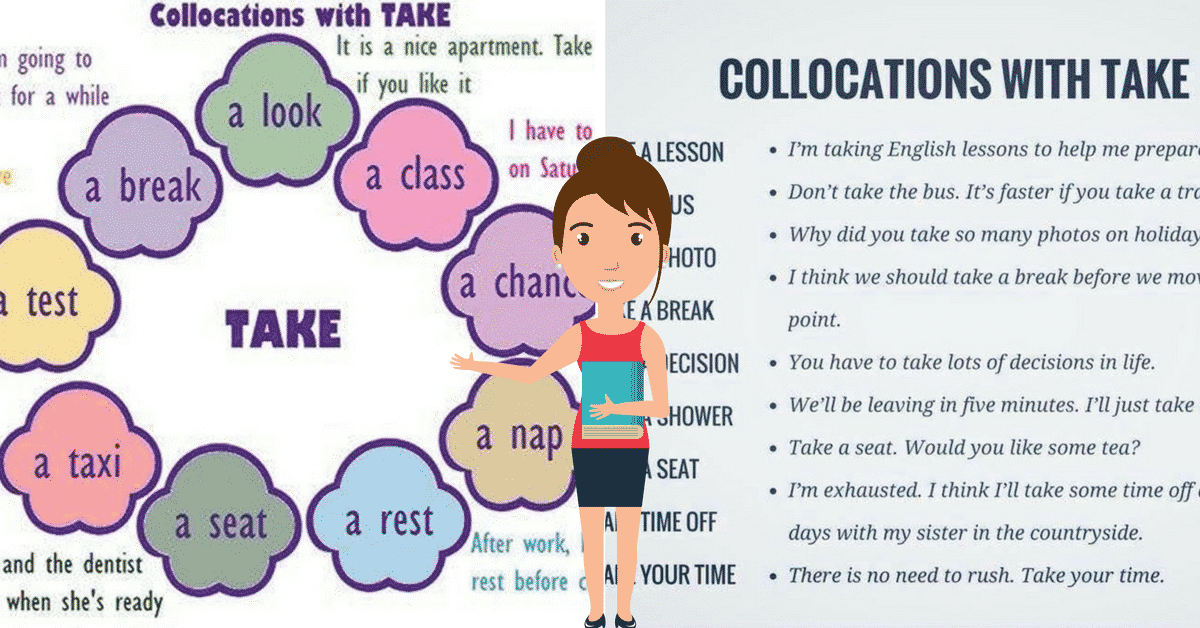 In the English language, collocation refers to a natural combination of words that are closely affiliated with each other. Below is the list of 50+ common collocations with TAKE in English you should learn.

Here is the list of useful collocations with TAKE in English with example sentences.

E.g. They wouldn’t honour their contract, so we took them to court.

E.g. After my temperature was taken, my blood pressure was checked.

E.g. Do you want to take a bite into this Apple?

E.g. During the show, I could barely take a bow.

E.g. Take a chance at it. You might win.

E.g. I have to take a class on Saturdays this semester.

E.g. You have to take lots of decisions in life.

E.g. I’m talking English lessons to help me prepare for the IELTS

E.g. I’ll take a look at the website and let you know what I think.

E.g. Debra’s not here just now. Can I take a message?

E.g. I think it will take a number of months for this to play out.

Take a photo/ a photograph

E.g. Why did you take so many photos on holiday?

E.g. Could I take a picture of you?

E.g. After work, I like to take a rest before cooking dinner.

E.g. Mountaineers take many risks when they climb high mountains.

E.g. I walked into her office and she told me to take a seat.

Take a shower (have)

E.g. If you take another step, I’ll shoot you.

E.g. You’ve taken an important step on the road to recovery.

E.g. Richard takes a taxi to work every day.

E.g. Have you taken your driving test yet?

Take a while/ a minute/ five minutes

E.g. Take a minute to read the question before answering it.

E.g. We take advantage of that.

E.g. I took my doctor’s advice and stopped drinking alcohol.

E.g. Finding a parking spot in the city takes ages.

Take an exam/ a test/ a course

E.g. I’m going to take a Maths exam next week.

E.g. It was a very difficult decision, leaving Leicester, but I had to take an opportunity that doesn’t come round often.

E.g. Take care, won’t you? It can be dangerous around here at night.

E.g. Who’s taking care of your pets while you’re away?

E.g. Who’ll take charge if the mayor is sent to prison?

E.g. He decided to take charge of the whole meal.

E.g. Lots of young people were taking drugs like marijuana in the sixties.

E.g. My doctor says I should take more exercise.

E.g. Has grandpa taken his medicine yet?

E.g. If I don’t take notes, I forget too many important details.

E.g. Don’t take any notice of what he says. It’s all nonsense.

E.g. During the debate, those taking part will be sitting on the stage.

E.g. Where did the meeting take place?

E.g. You should take pride in the fact that your English is improving.

E.g. After the battle was over, we took hundreds of enemy soldiers prisoner.

E.g. If a player’s injured, another player takes his place in the team.

E.g. I took my temperature and I found that Iam running a fever.

E.g. Changing the way people think takes time, so you have to be patient.

E.g. I’m exhausted. I think I’ll take some time off and spend a few days with my sister in the countryside.

E.g. If we take turns driving, we can travel all night.

E.g. Most of the space on my hard disk is taken up by movie files.

E.g. There’s no time limit, so you can take your time. 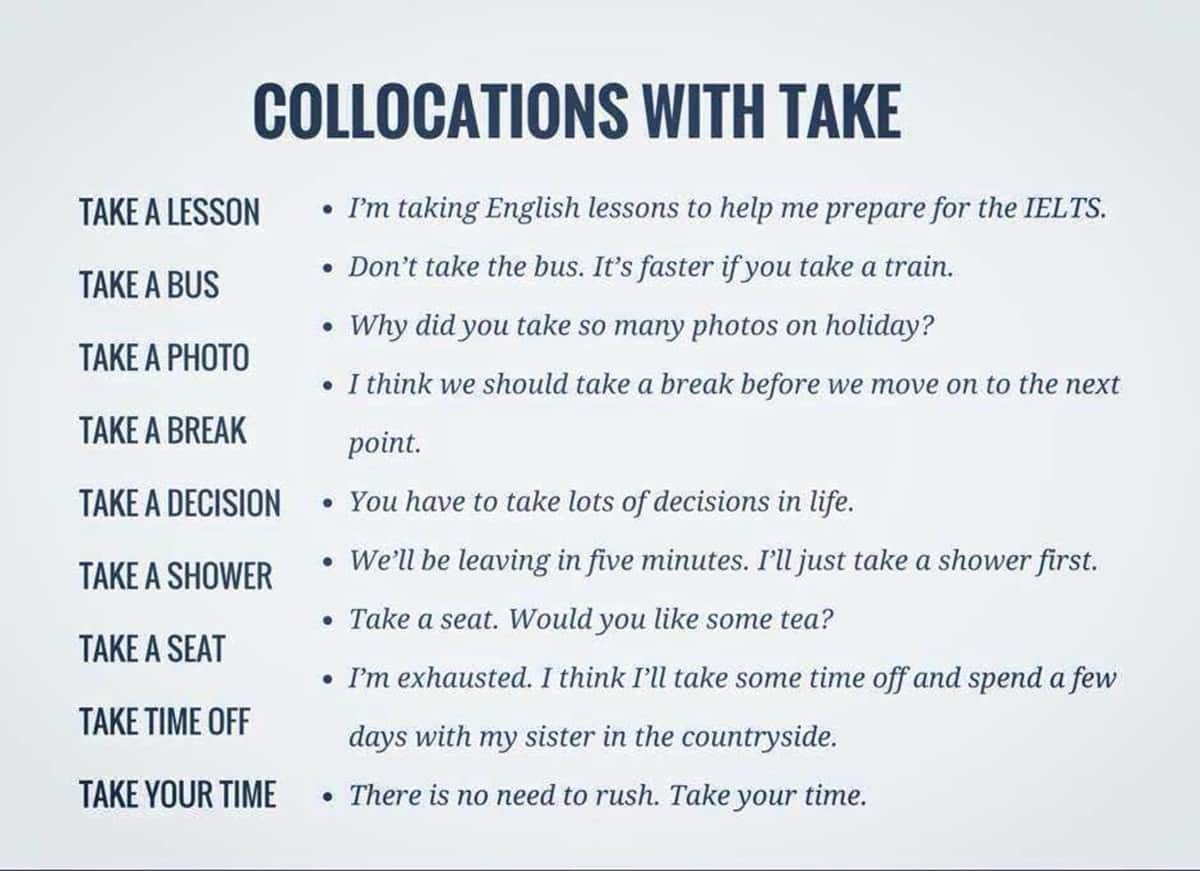 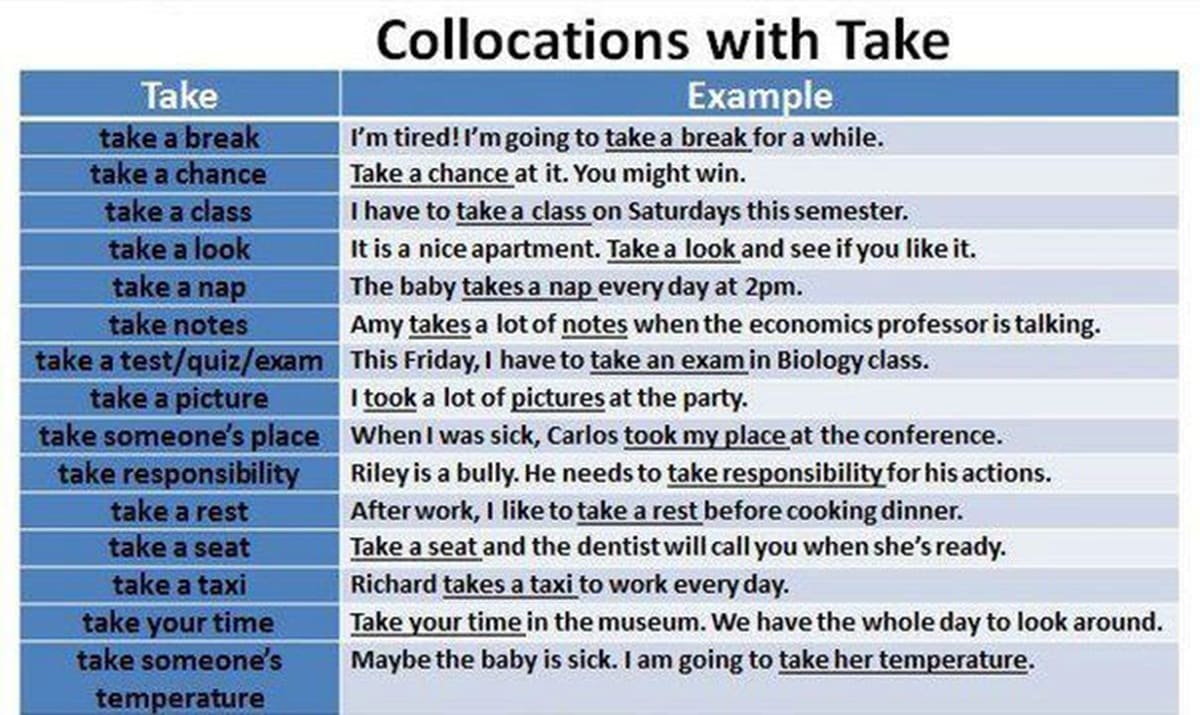 It’s great to be on your page,when it comes to learning English.