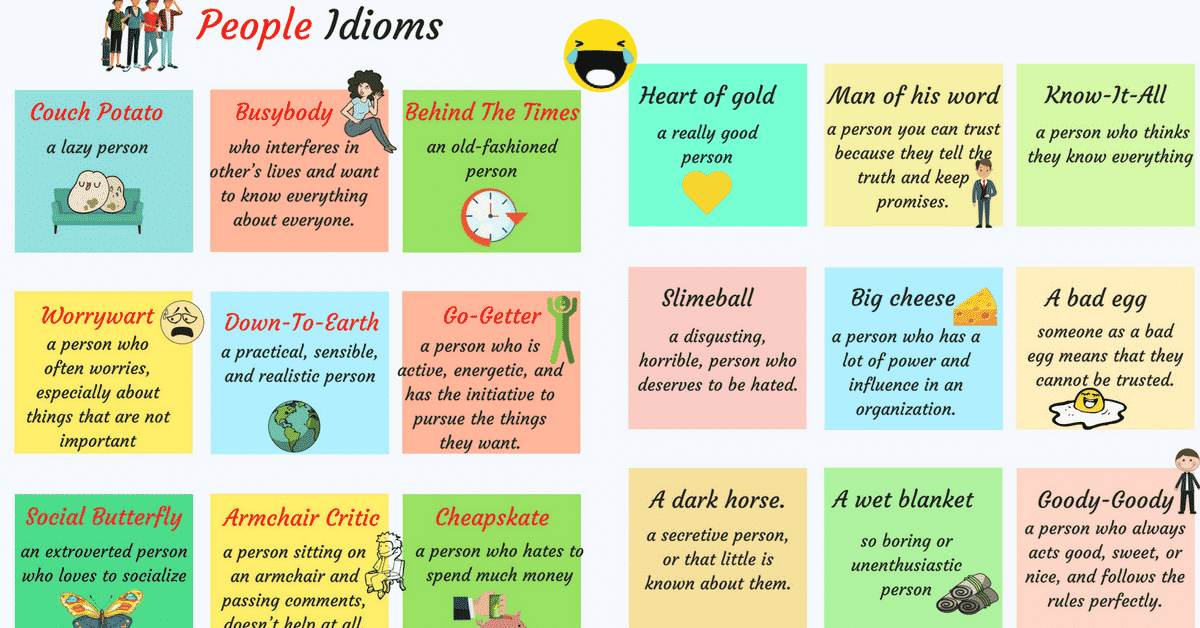 People come in all shapes and sizes – and with different personalities. Having the right words to describe them is helpful.

In your life, you have met – and will meet – a lot of different types of people. From friendly to rude, sensible to foolish, extroverted to introverted – you will probably encounter them all in your lifetime.

Idioms to Describe People in English

Here is a list of 14 different English idioms that describe positive personality types:

Someone who always thinks positively is a born optimist.

Example: I admire Jamal because he always sees the sunny side of life. He’s a born optimist.

An eager beaver is a (sometimes overly enthusiastic) person who works very hard to get things done or achieve goals.

Example: She always does her English grammar homework and even asks for extra exercises on the weekend. What an eager beaver!

An early bird is someone who is early, in particular (but not exclusively) someone who gets up early in the morning. Being an early bird can be quite advantageous. As the old proverb states, ❛the early bird gets the worm❜.

Example: In her senior years, when she finally had the luxurious freedom to sleep in, Delores became an early bird and got up every morning at 5:00 am.

The term earth mother refers to a woman is very caring and maternal, i.e. who has a natural ability as a mother.

Example: Even as a young girl, Ida showed herself to be an earth mother. She always helped her mother to look after her younger brothers and sisters.

A family man is a man who devoted to his family.

Example: Since the birth of his twins, Harvey has become a family man. He spends all of his spare time with his children.

A go-getter is someone who is ambitious and pursues his goals.

Example: It isn’t surprising that Isaac has made it to the top of the corporate world. He was always someone who went after what he wanted, a real go-getter.

A good egg is a good person.

Example: Marry was the type of person who would have helped anyone – a real good egg.

A jack-of-all-trades is someone who can do several jobs instead of only being specialized in one.

Example: From auto repair to hairdressing, Frank can do it all. He is a jack-of-all-trades.

A man of his word or a woman of her word is someone who always does what he/she promises.

Example: You can trust Samuel. He is a man of his word.

A mover and shaker is an influential person who makes things happen.

Example: He was a mover and shaker in the world of politics. He accomplished a lot in his 30-year career.

A smart cookie refers to someone who is clever and good at dealing with difficult situations.

Example: Why don’t we ask Miss Chips to help us solve our problem? I’ve been told that she’s a smart cookie.

Example: The teacher is never angry when Albert forgets to do his homework. He is the teacher’s pet.

A whizz kid is a young person who is very clever and successful.

Example: I’ve never seen anyone learn English grammar tenses faster than André. In only two weeks, he knew everything about the present perfect simple – what a whizz kid!

A fast talker is a super talker, i.e. someone who is good at persuading people to do what he wants. A fast-talker can convince people to believe things that are not true or do things that they would not normally do.

Example: When I went to the car dealership, I wanted to buy a small compact car. When I left, I had purchased a van. The salesman was a real fast-talker!

A busybody refers to someone who is overly interested in the lives of others.

Example: Martha is always looking out her window to see what the neighbors are doing – what a busybody!

If someone is stingy or obsessively avoids spending money, he or she can be called a cheapskate

Example: When we go out; I always have to pay for everything. Fred is such a cheapskate!

A fuddy-duddy is someone who has old-fashioned ideas and is extremely conservative.

A gold digger is someone who has a relationship with someone in an effort to get the other person’s money.

Example: Nora is only interested in Mr. Higgins money. She’s a gold digger.

The typical know-it-all seems to know everything and annoys other people by showing how clever they are. In British English, this idiom is referred to as a know-all.

Example: No one is more of a know-it-all than Rodney. He is constantly correcting his parents and teachers on the subjects of European history and geography.

Someone who is ❛overly❜ interested in finding out information about other people is called a nosy parker.

Example: The Martins are always looking out their kitchen window to see what we are doing. Don’t those nosy parkers have better things to do?

A party pooper is someone who ruins all of the fun at a party or get-together by not wanting to participate in certain activities or simply through negativity.

Example: We asked Lee to play a game of Monopoly with us but he said no. Instead of playing, he went home. He’s such a party pooper!

Although not quite as negative as the expression cheapskate, the term penny-pincher refers to someone who is very careful about the money he spends.

Example: Martha is extremely careful about the money she spends. She is a penny pincher.

A foolish, unintelligent or stupid person can be called a half-wit.

Example: I didn’t know that anyone could be that foolish. How could that half-wit spend so much money on silly things?

The term slimeball is used to refer to two types or people, both of them bad. The first meaning of slimeball is someone who is generally terrible – a bad, unpleasant or dishonest person. The second meaning is similar. It refers to an unpleasant person who is friendly in a way that is not sincere. In other words, someone who says nice things to you but isn’t being honest about how he really feels.

Examples: After 25 years of marriage, he left her to go on a trip around the world with his new girlfriend. What a slimeball!

A person who thinks he is highly intelligent and tries to demonstrate this fact to others can be called a smart alec. Smart alecs often like to contradict and correct others and are, therefore, not liked.

Example: When I made my presentation, Stefan publicly questioned the accuracy of my statements. Why couldn’t that smart alec wait until after my speech to tell me what he thought?

A wise guy is another term for a smart alec, i.e. someone who is always trying to present himself as being more clever than everyone else.

Example: So you think you’re right, wise guy? You’re not as smart as you think.

Worrywarts are people who worry too much or worry about unimportant things.

Example: Walter constantly worried about his children. He was a worrywart. 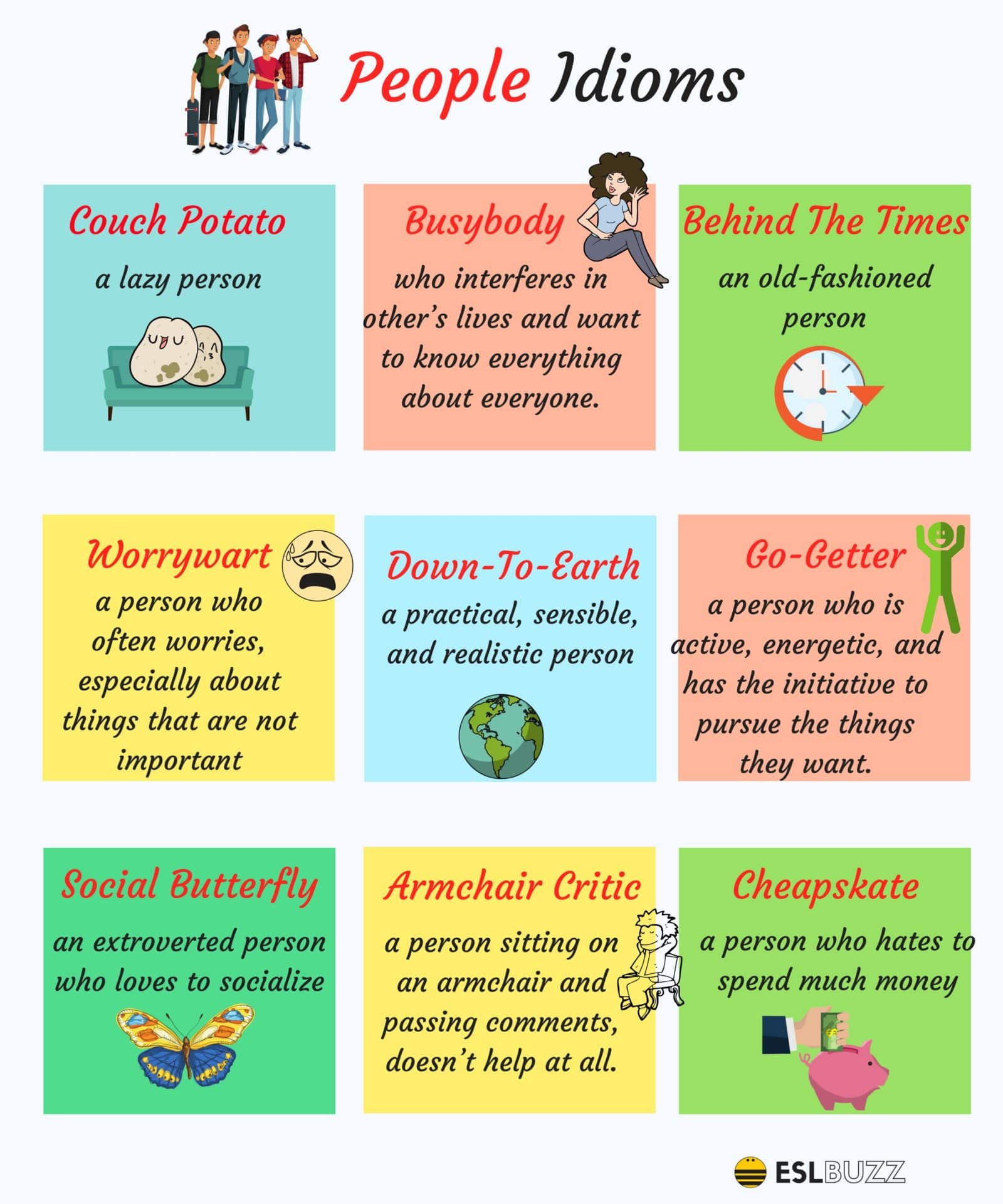 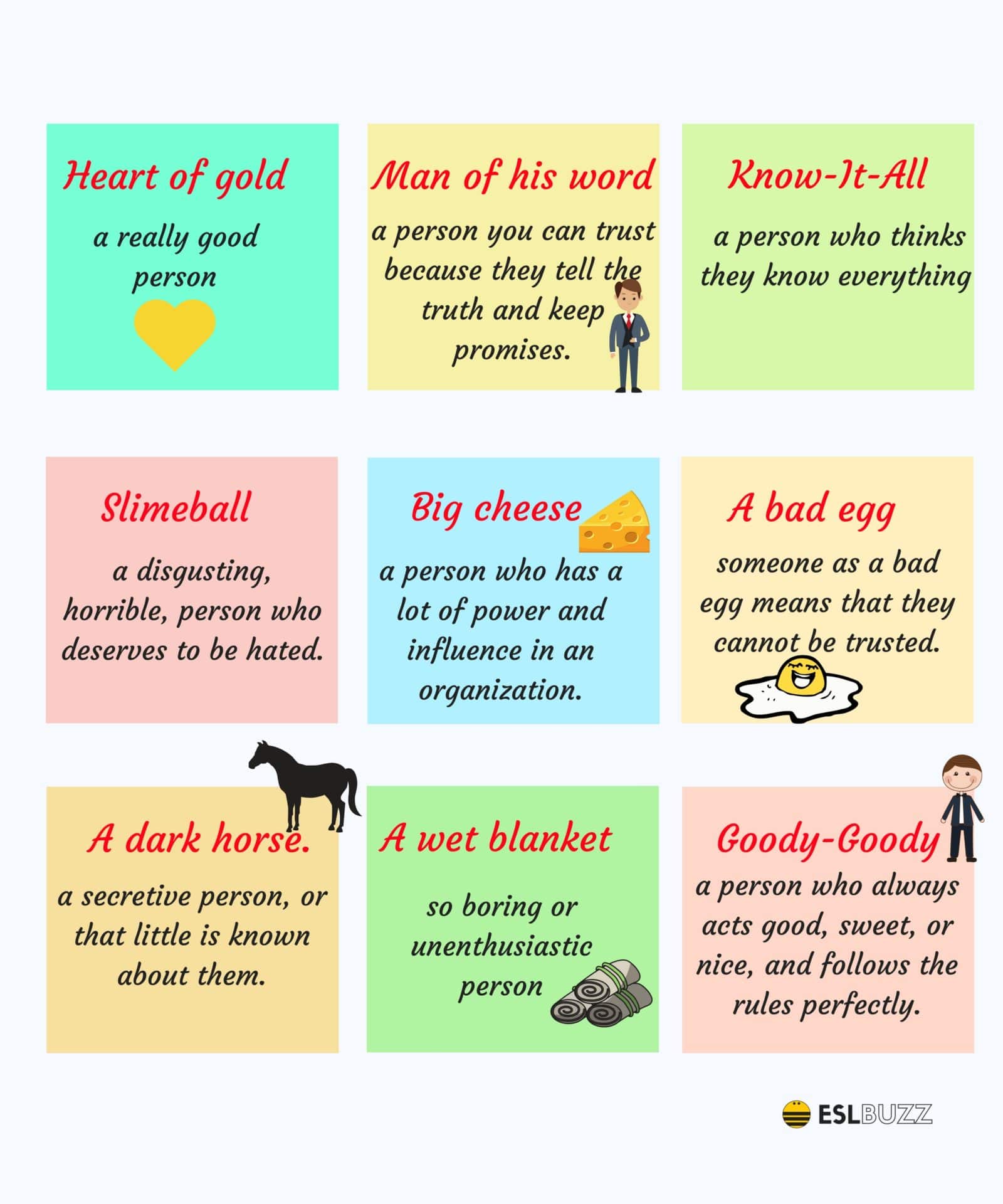 calll me no one

id double check the meaning of culture vulture. it’s not a positive.

Thank you for the help

No one asked you T_T

You don't know me

I love this website. It is exactly what I needed to complete my school work. This helped me a lot!

Nice by the way🧡🧡

hi i rank apps and stuff my name is mr. franks and i rank this app 5 stars and the idioms are amazing i wrote a letter using a idiom on here it was heart of gold amazing stuff

Useful and helpful idioms. Tons of thanks!

Thank you so much for collections of lots of useful idioms. This helps me a lot with what I am doing right now. Thank you, have a good day.