Take a look at these English idioms; they all use numbers.

E.g. He got home from the party all in one piece.

2. Back to square one

Meaning: Back to the start

E.g. The project failed, we’re back to square one.

3. Have one too many

Meaning: Drink too much alcohol

E.g. When my mom bought me a computer, I was on cloud nine.

Meaning: Have a drink before leaving

8. Kill two birds with one stone.

E.g. I’ll drop you off on the way to work, we’ll kill two birds with one stone.

9. A million and one

E.g. I have a million and one ideas.

E.g. I put in my two cents at the meeting.

Meaning: To be the first to criticize or attack someone

12. Get the third degree

Meaning: To be questioned in great detail about something

E.g. My boyfriend isso controlling that I always get the third degree if I goanywhere or see anyone without him.

13. Be in two minds (about something)

Meaning: To not be certain about something, or to have difficulty in making a decision

E.g. I’m in two minds about accepting the job.

E.g. Nine times out of ten your first choice turns out to be the right one.

Meaning: A routine job in an office that involves standard office hours

E.g. They put him six feet under two days after he died.

Meaning: To be independent and self-sufficient

E.g. He never left home after high school, so he never learned to stand on his own two feet.

Meaning: To take one brief (about five minutes) rest period

E.g.To take a short break, about five minutes. I’ve been painting all morning, can I please take five?

Meaning: Two people who are very similar in appearance

E.g. They’re like two peas in a pod, of course they’re married!

Meaning: You say this when you think that a difficult situation or argument cannot be the fault of one person alone.

E.g. Your son blames mine for their fight at school, but it generally takes two to tango.

21. Never in a million years

E.g. Never in a million years did I think that I would actually win the lottery!

22. Dressed up to the nines

Meaning: Someone is wearing very smart or glamorous clothes

E.g. I have to be dressed to the nines at this gala tonight—a lot of important people will be there.

23. Be in seventh heaven

E.g. I’ve been in seventh heaven ever since I got engaged!

Meaning: Someone is in a state of confusion or not very well organized.

E.g. I’m at sixes and sevens now that the whole schedule has been rearranged.

25. Have one over the eight

Meaning: A person is slightly drunk.

E.g. From the way he was walking it was obvious he’d had one over the eight.

26. At the eleventh hour

Meaning: It happens when it is almost too late.

E.g. I was shocked that they reached an agreement at the eleventh hour after weeks of squabbling.

Meaning: You are down on your hands and knees.

E.g. I got down on all fours trying to find my ring in the sand.

Meaning: To feel great, to feel well and healthy.

E.g. You look like a million dollars in that dress, honey! 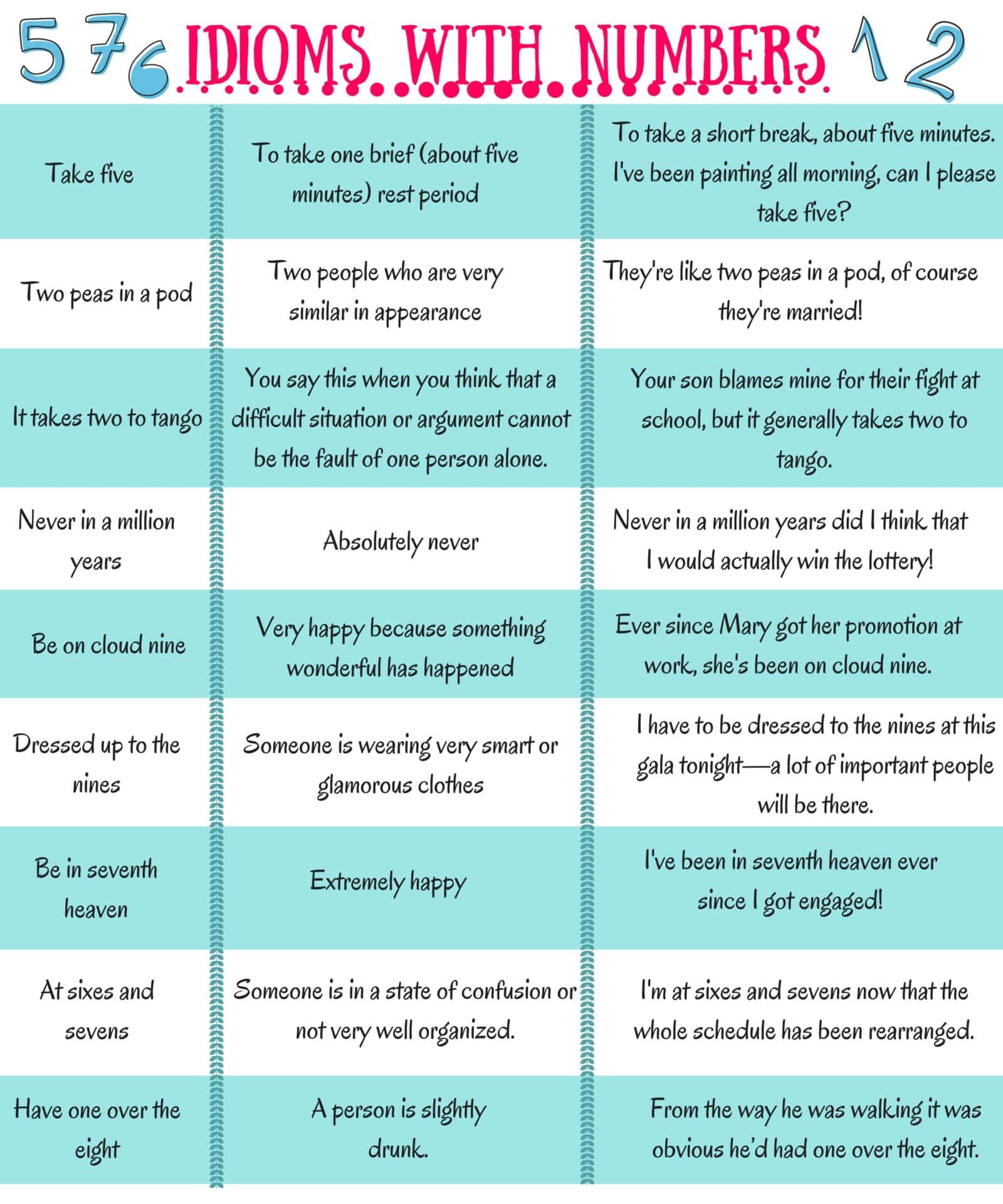 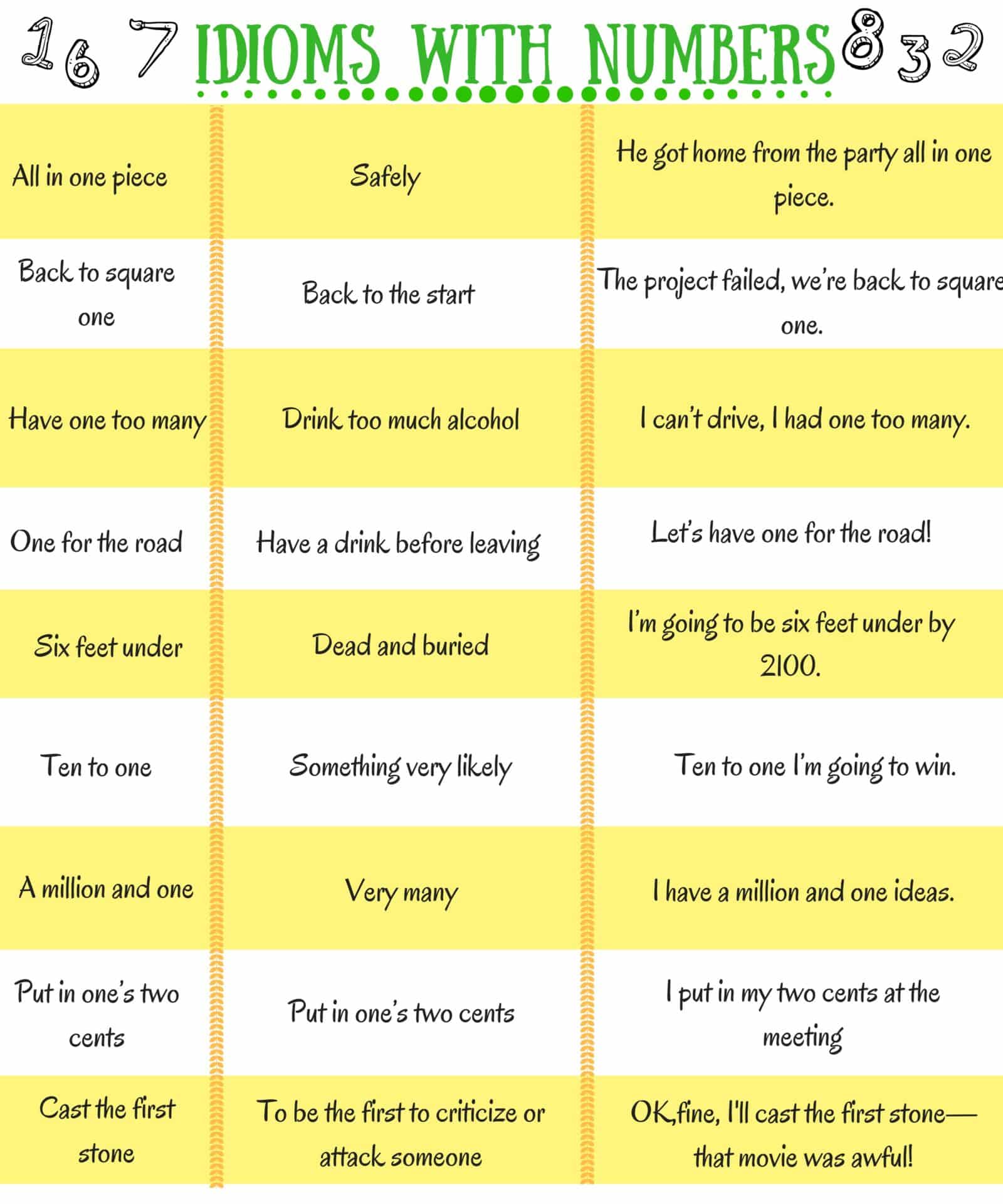 I am 14 and supposed to be doing a report on number Idioms and I have no clue what some of these Idioms mean so this did not help one bit.