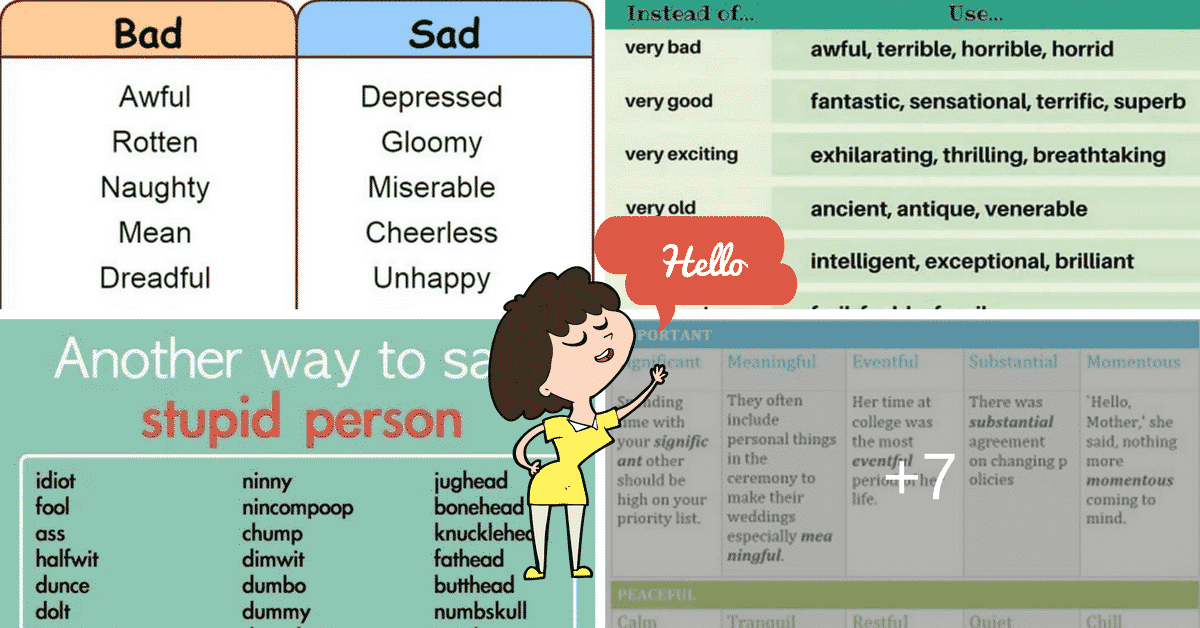 Learn the useful list of 100+ ways to say common things in English.

Do you want a different way to express the same idea?

Other Ways to Say “Laughed”

The girls giggled at the joke.

She chuckled at the memory.

He looked so funny, we all roared.

Although his friends snickered, they were still impressed.

She let out a loud guffaw.

She shrieked in fright.

They grinned with delight when they heard our news

They all cackled with delight.

He walked in and everyone just cracked up.

That comedian had us spliting our sides. 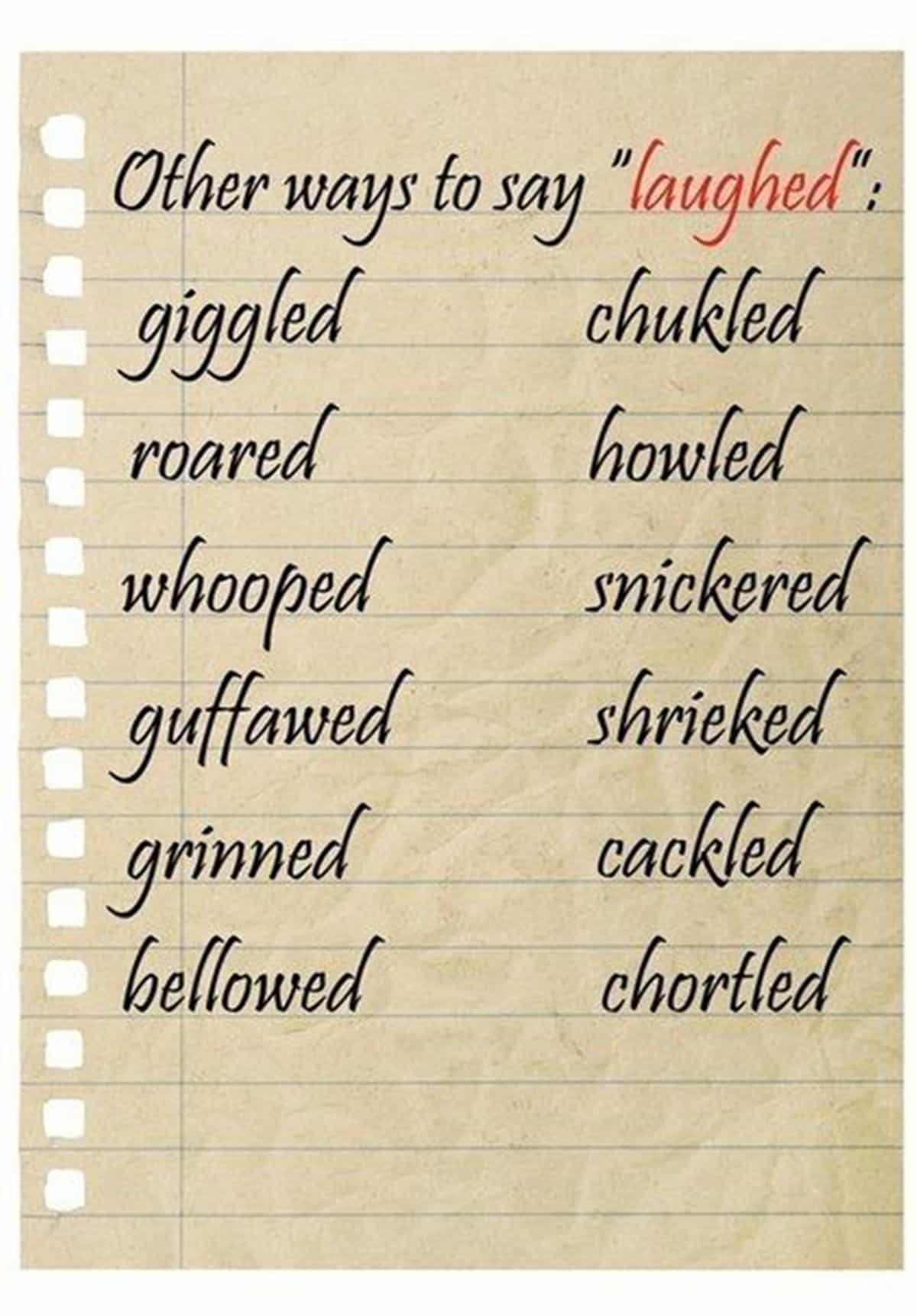 Other Ways to Say “Amazing”

The performance was an astounding success.

They had an awesome task ahead.

Anna is a fabulous cook.

The weather was absolutely fantastic.

I felt I’d made an incredible discovery.

He was a man of stupendous stamina and energy.

You’ve all been absolutely wonderful!

The size of the universe is unimaginable.

We went to a tremendous party.

The announcement was not entirely unexpected.

The product has been a phenomenal success.

It was a spectacular achievement on their part.

You may find it somewhat overwhelming at first.

She was a truly remarkable woman.

The scene was one of breathtaking beauty.

It was a significant moment.

They paid a staggering £5 million for the house.

What a brilliant idea!

It’s marvelous what modern technology can do.

Other Ways to Say “Bad”

I feel awful about forgetting her birthday.

It was a terrible thing to happen to someone so young.

She lives in a really crummy area.

That movie was really wack.

Peter’s been in a shitty mood all morning.

I’ve had a rotten day!

It’s dreadful the way they treat their staff.

I had a nasty feeling that he would follow me.

He was very unpleasant to me.

The conversation was disagreeable to her.

I felt wretched about the way things had turned out.

I’ve got a horrible feeling she lied to us

I can’t believe that she said the most outrageous things.

I hate you! You’re despicable.

His behaviour was absolutely disgraceful! 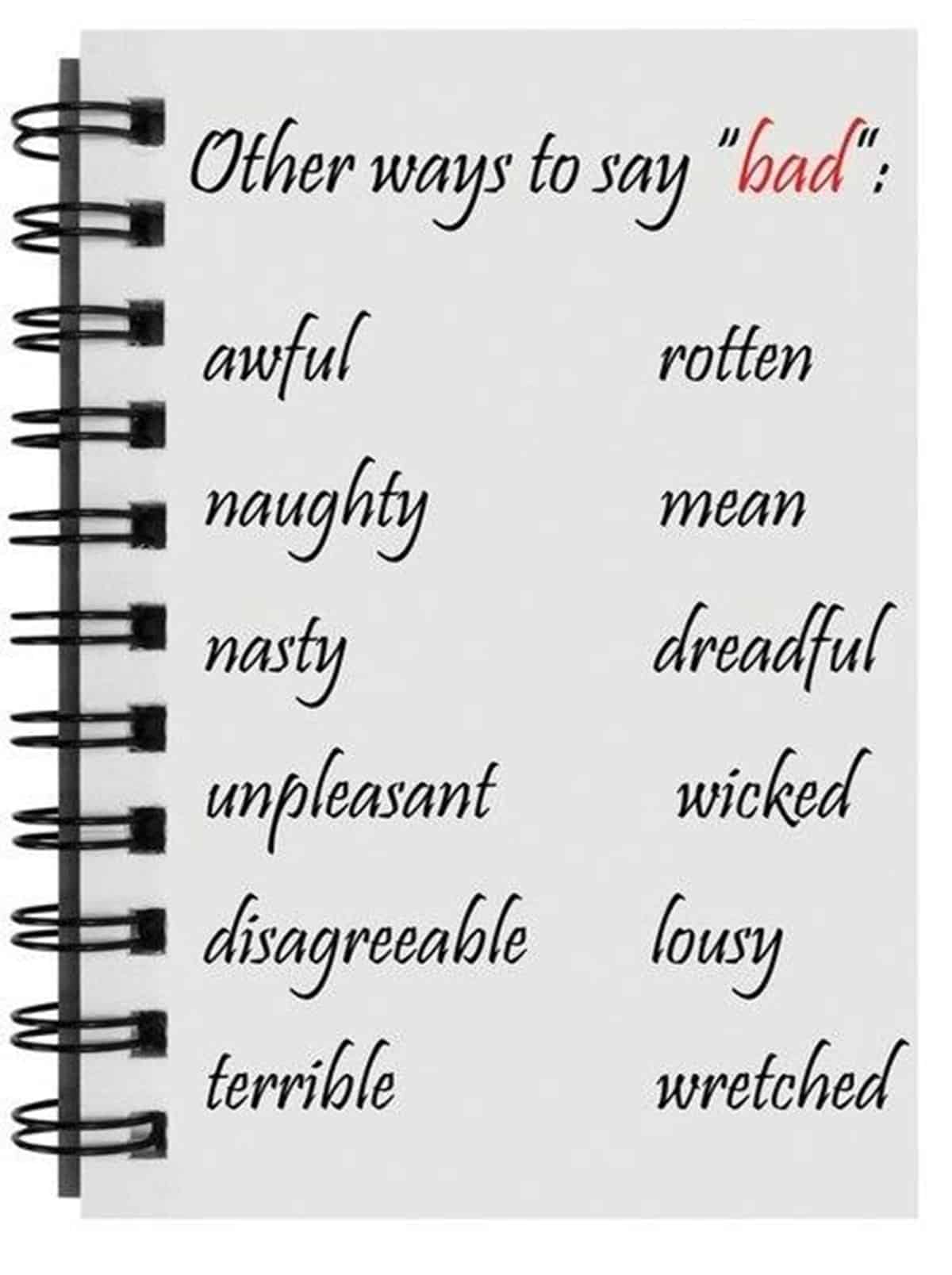 Other Ways to Say “Delicious”

The meals he cooked were never appetizing.

The food is wholesome, tasty and well-presented.

This dish is flavourful with basil and garlic.

Delectable smells rose from the kitchen.

What a scrumptious meal!

Yum, that steak was delish.

These biscuits are yummy.

The meat was tender and juicy.

He enjoyed the luscious fruit. 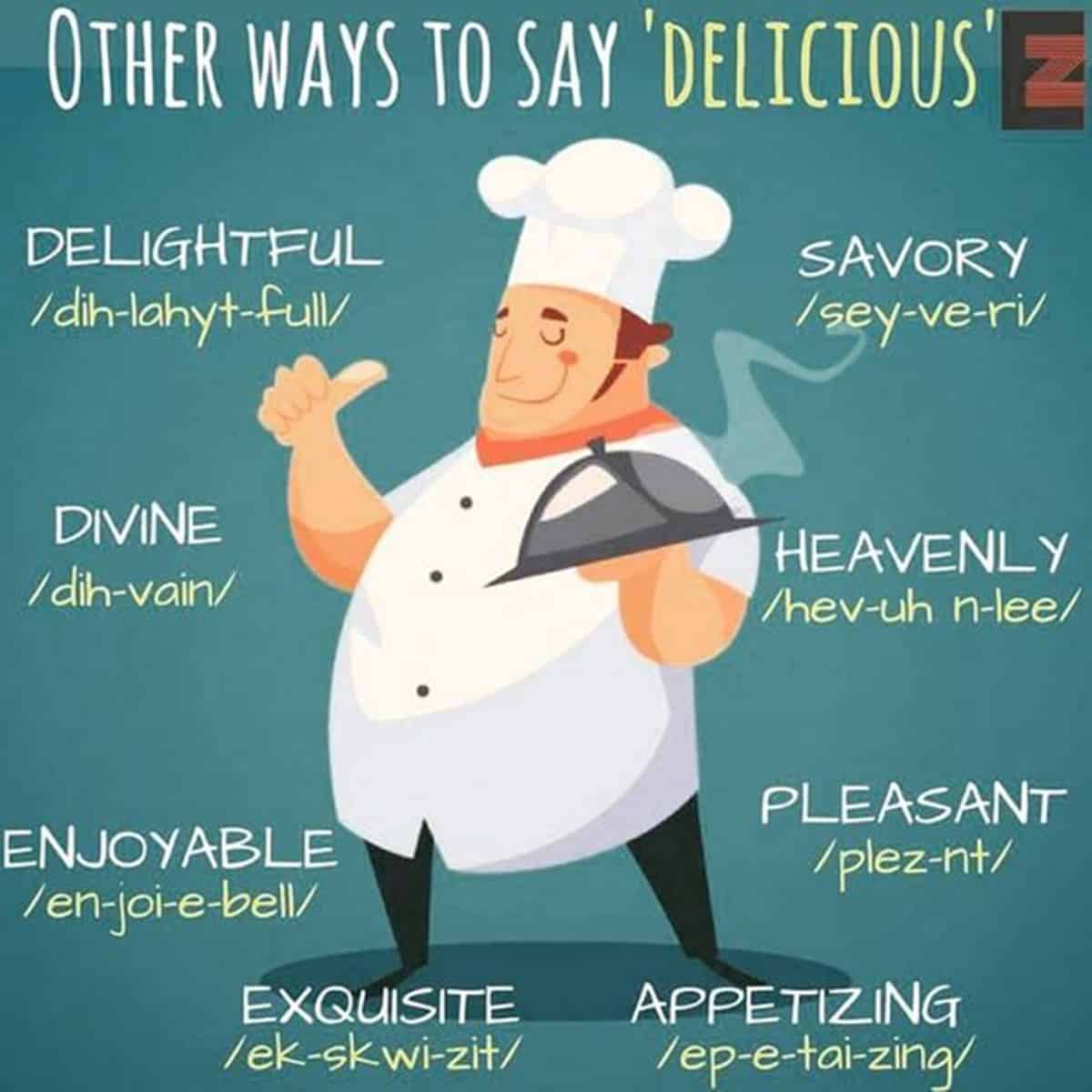 Other Ways to Say “Strange”

The play was a surreal mix of fact and fantasy.

It’s unusual for the trees to flower so early.

He made some totally bizarre comments.

He has a rather offbeat sense of humour.

I had a peculiar feeling we’d met before.

It all sounds a bit queer to me.

The old lady was getting very eccentric.

I find it absolutely astonishing that you didn’t like it.

I had an uncanny feeling I was being watched.

At that time, it was completely unheard-of for girls to go to university.

It’s extraordinary that he managed to sleep through the party.

It was a curious feeling, as though we were floating on air. 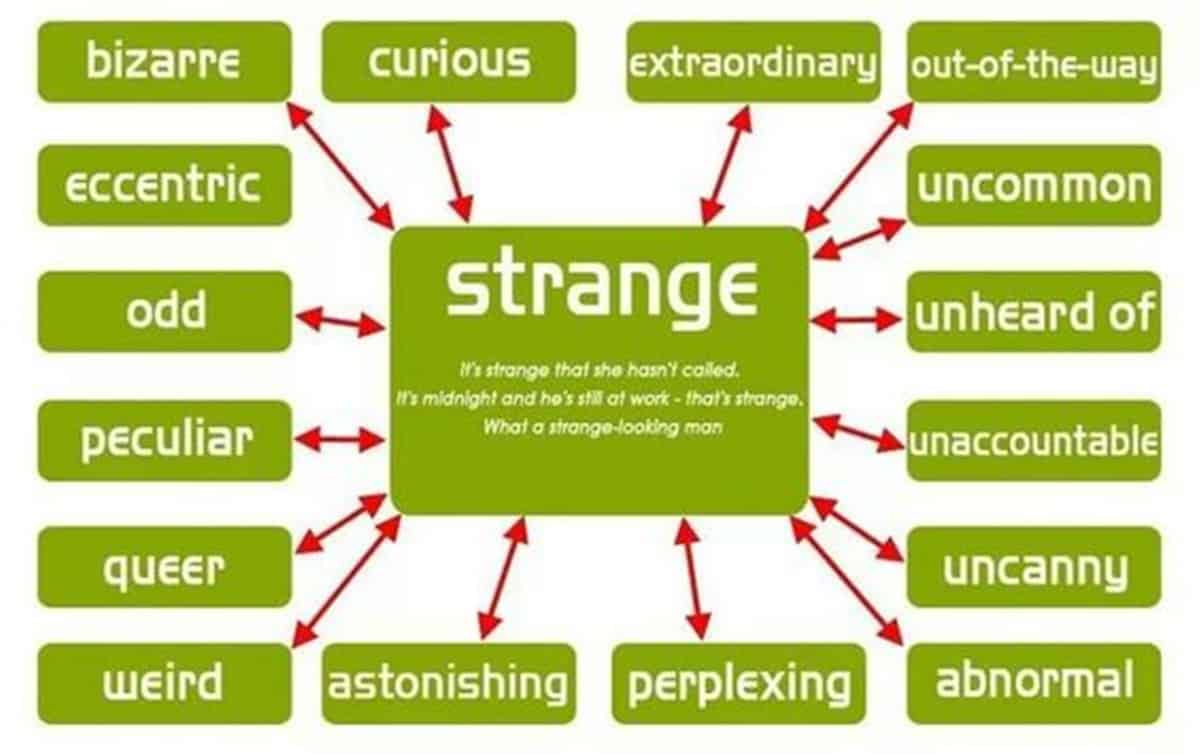 Other Ways to Say “Happy”

We were all amused at his stories.

We spent three blissful weeks away from work.

She gave me a bright smile.

I was charmed with her beauty.

She is cheerful in spite of his illness.

He was a contented man.

I was delighted that you could stay.

Everyone in the class seemed eager to learn.

Sophie was ecstatic about her new job.

They were elated at the result.

You don’t sound very enthusiastic about the idea.

They were very excited.

The fans were exultant at their team’s victory.

He was gleeful about the idea of making his own movie.

She gave a joyful laugh.

He showed a lively interest in politics

She chose the present with loving care.

This will be a marvellous opportunity for her.

We had a few drinks and all got quite merry.

He is optimistic about the future.

She’s over the moon about her new job.

He was overjoyed at my success.

She was very pleased with her exam results.

She tried to be more positive about her new job.

She’s never satisfied with what she’s got.

I was thrilled to be invited. 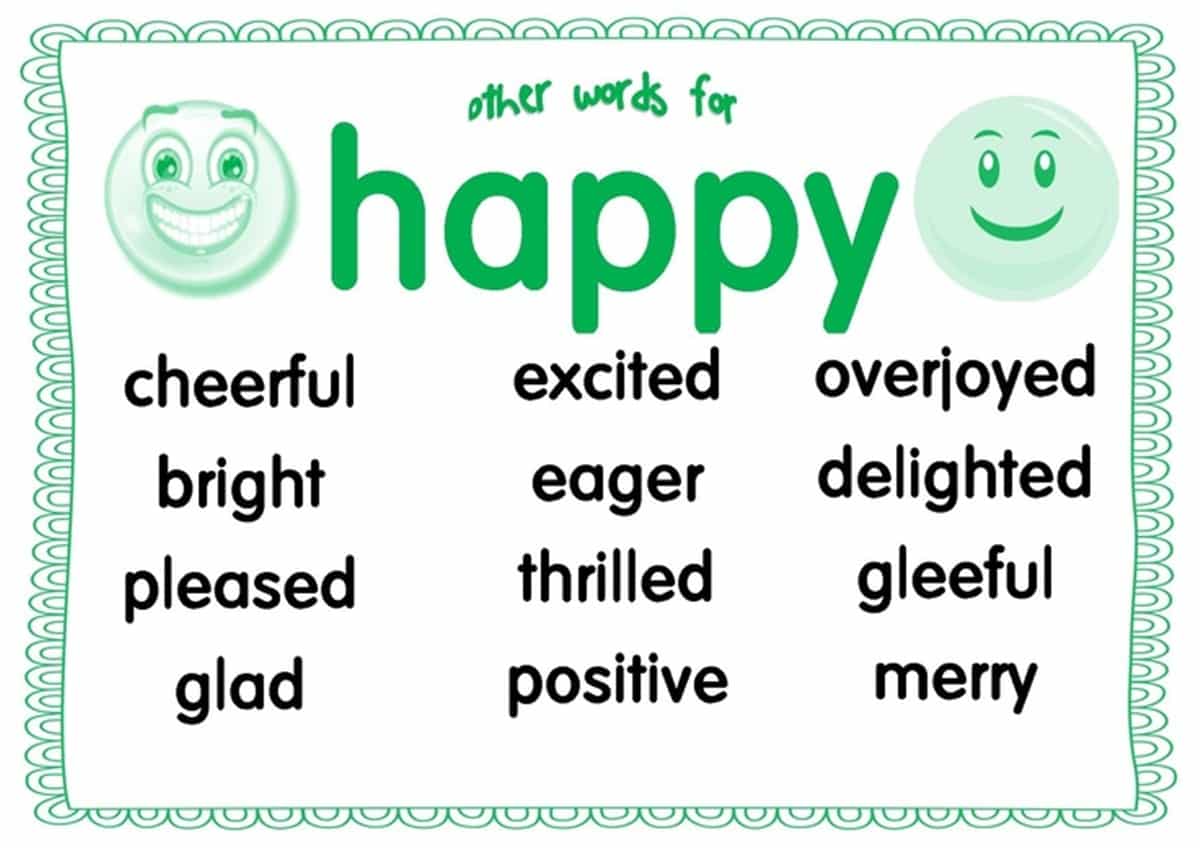 Other Ways to Say “Stupid”

Hey, are you dumb?’ he shouted.

Her work is full of silly mistakes.

I was foolish enough to believe what Jeff told me.

Don’t be so idiotic!

Don’t be so daft!

He was a dorky kid.

I made an ass of myself at the meeting—standing up and then forgetting the question.

Her remarks were ill-advised, to say the least.

I can’t believe you were so naive as to trust him! 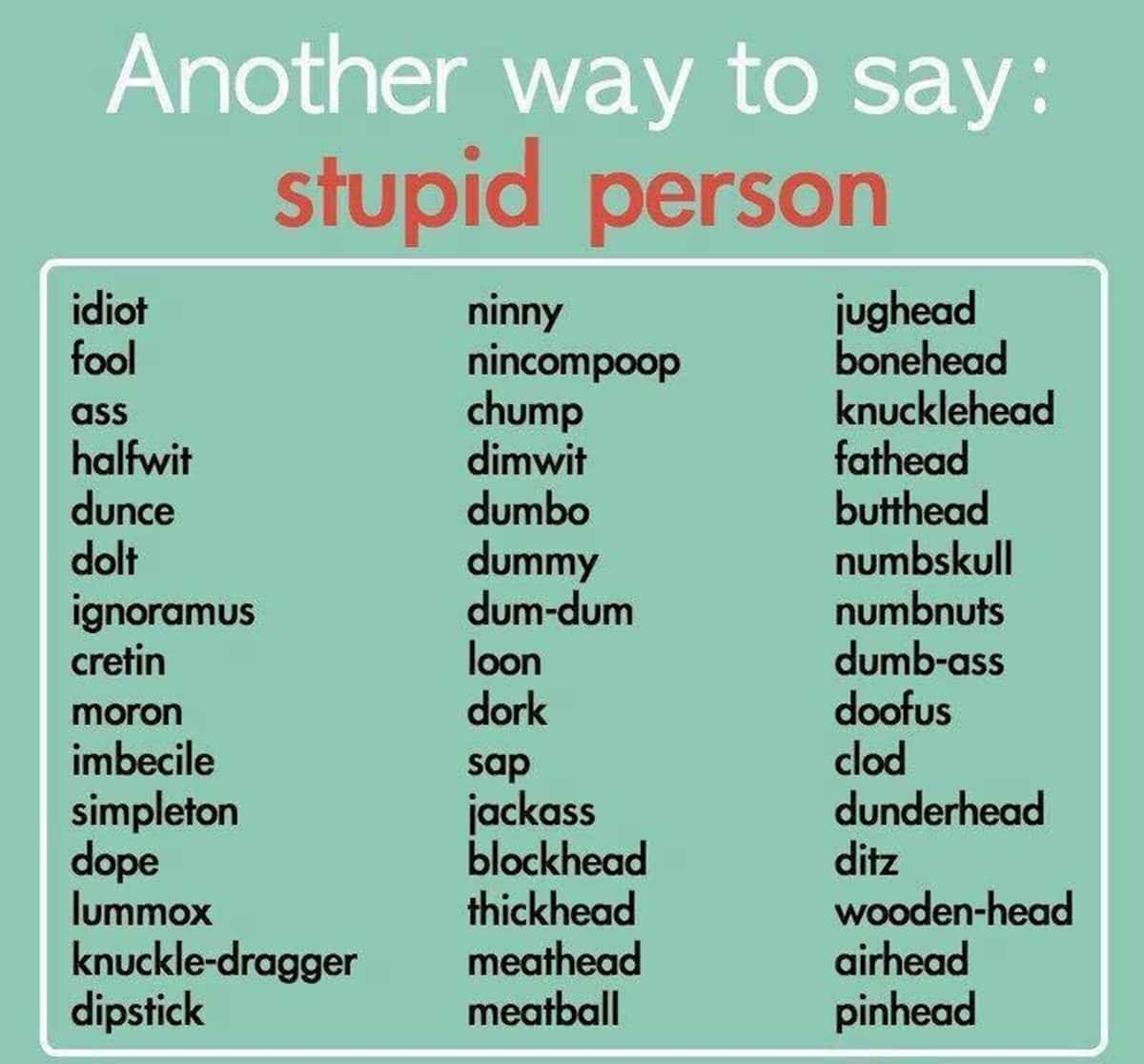 Other Ways to Say “Good”

We had a wonderful time last night.

Please try to be pleasant to our guests.

It’s marvellous what modern technology can do.

The quality of the recording is quite exceptional.

The weather was absolutely fantastic.

We had a super time in Italy.

Your mother is one of the most outstanding teachers in music.

When I was a child, I was a terrific drawer.

We’ve all had a splendid time.

The opera was quite stupendous! 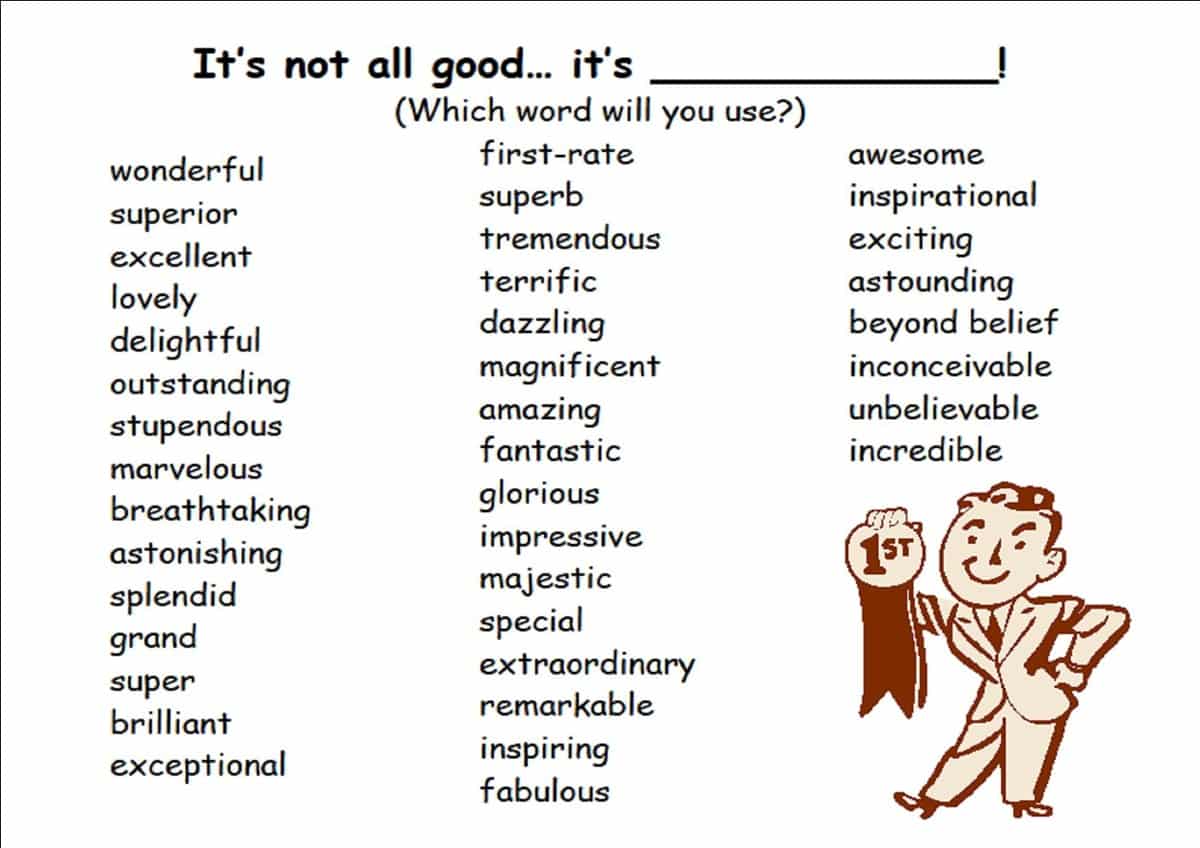 Other Ways to Say “Love”

I really admire your enthusiasm.

It’s obvious that she adores him.

Her family doesn’t appreciate her.

Children need to be cherished.

Thanks for a great evening. I really enjoyed it.

Do you fancy going out this evening?

He dotes on his children.

The President honoured us with a personal visit.

I respect you more than anyone.

I wanted to savour every moment. 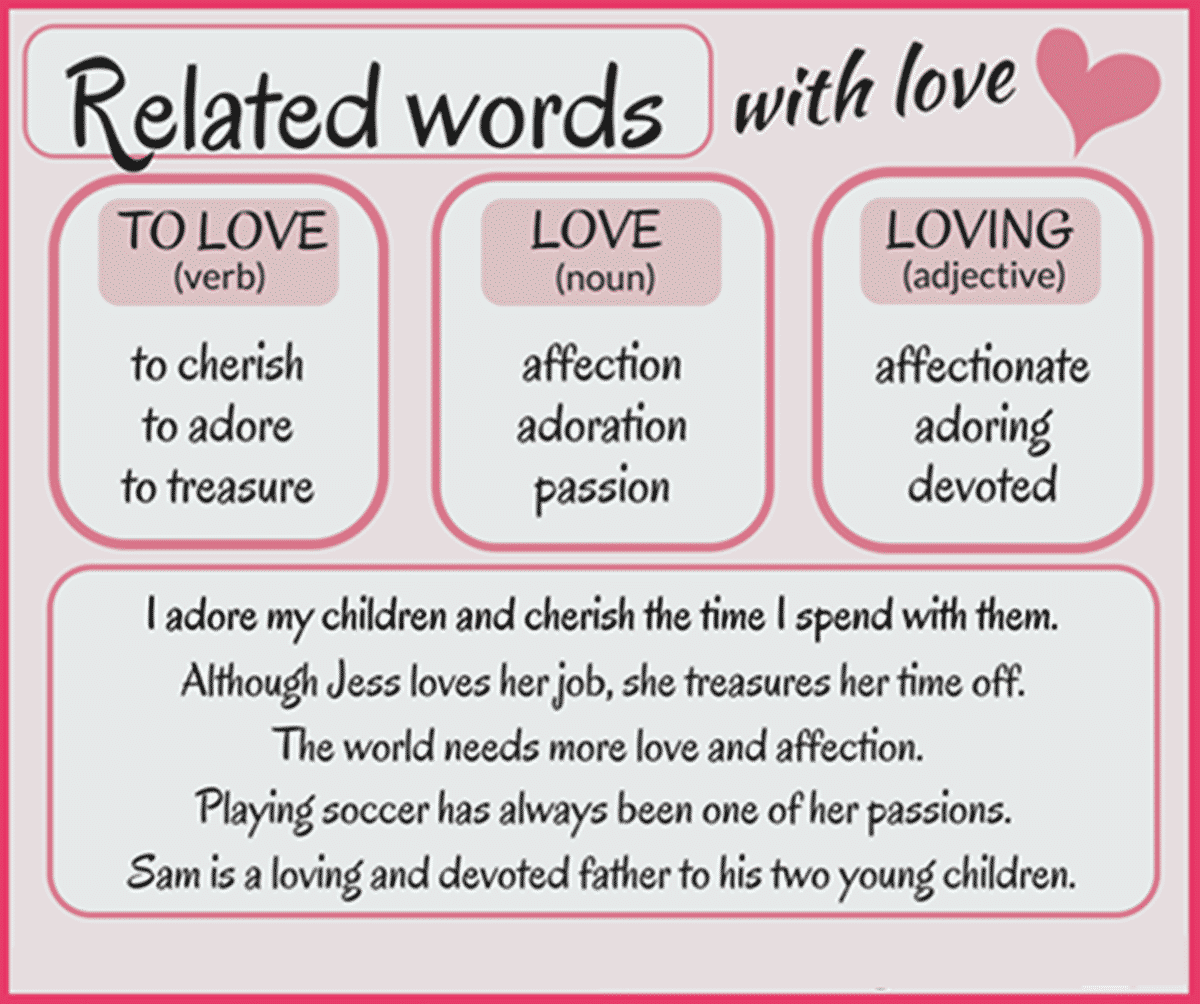 Other Ways to Say “Sad”

He’d been feeling blue all week.

They seem so somber, so mournful, so cheerless.

She looked so dejected when she lost the game.

She felt very depressed about the future.

Learners can feel very discouraged if an exercise is too difficult.

I was disgusted with myself for eating so much.

She kept her eyes slightly downcast to avoid looking into their faces.

His apathy just made her even more frustrated.

We sat in gloomy silence.

I tried to ignore her hateful words.

He was heartbroken when she left him.

They started shouting at me. It got very heavy.

We were cold, wet and thoroughly miserable.

I couldn’t bear the mournful look on her face.

Paul was in a sombre mood.

She always look at me with sorrowful eyes.

She made a tearful phone call to her family.

I didn’t realize but he was deeply unhappy at that time.

This decision is likely to upset a lot of people.

She was feeling tired and weepy.

I felt wretched about the way things had turned out.

He has a woeful face.

The music suited her melancholy mood. 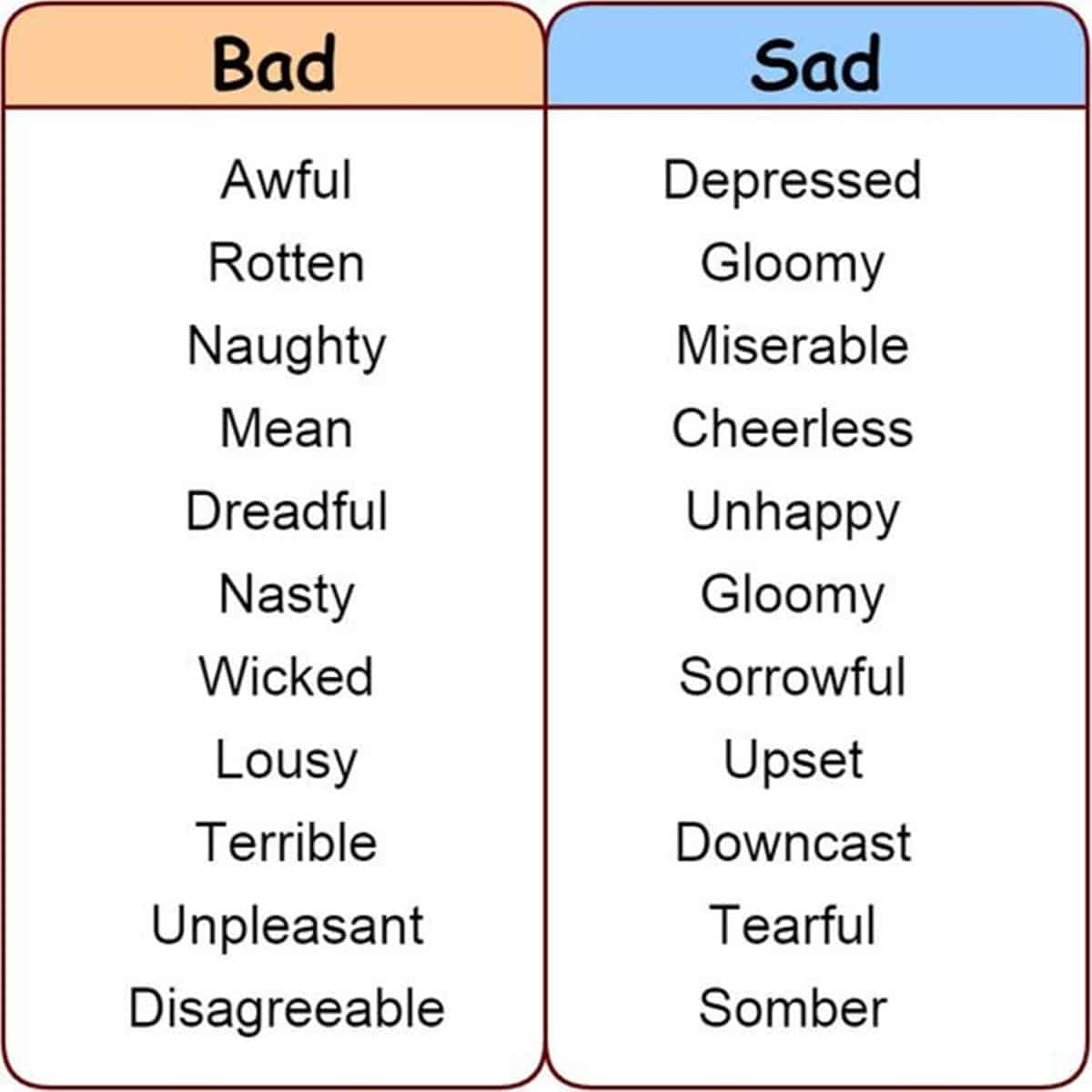 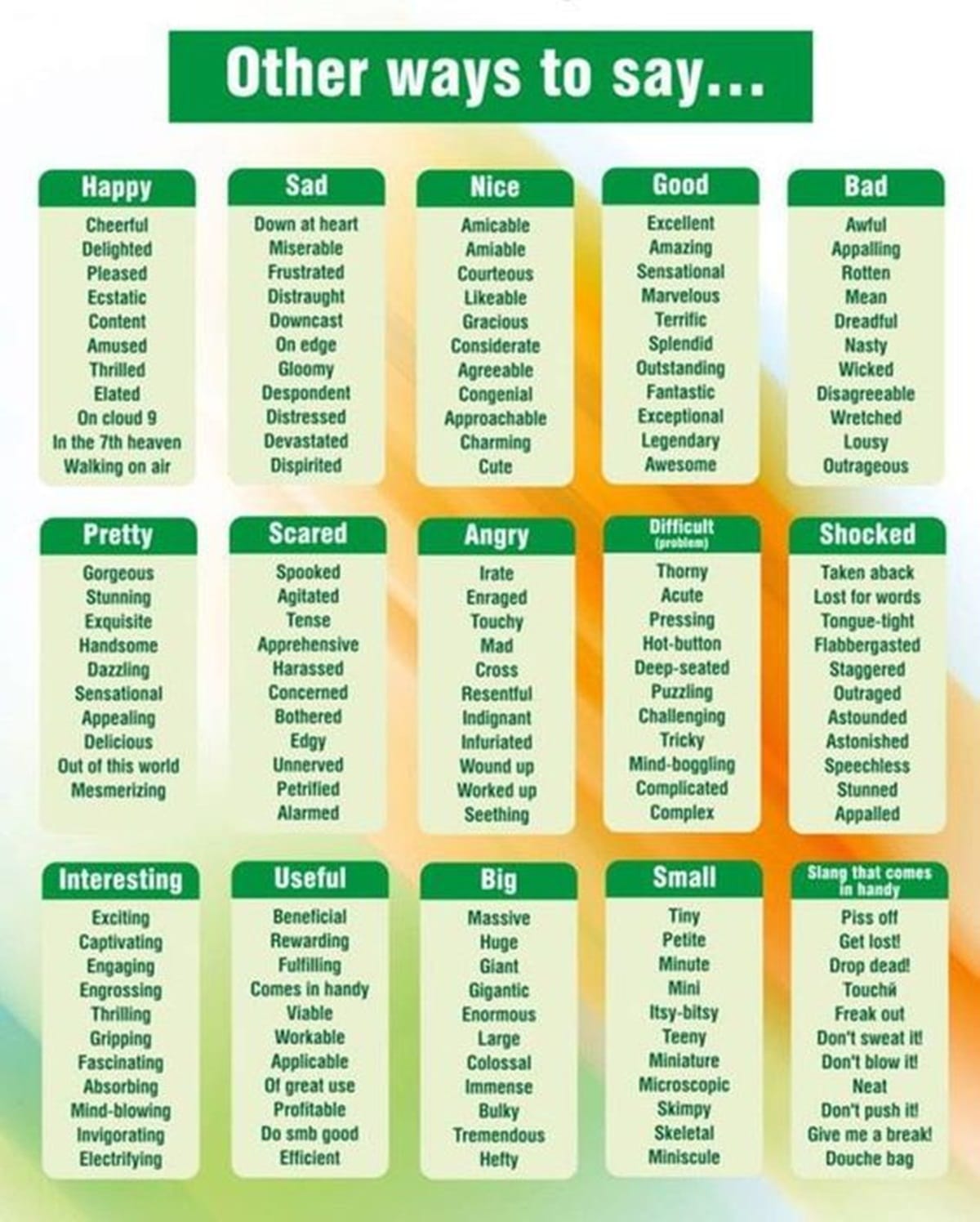 I feel as though I’m “prepping ” for some unforeseen period when the time will be right to utilize your donation of this commodity. Thank you!